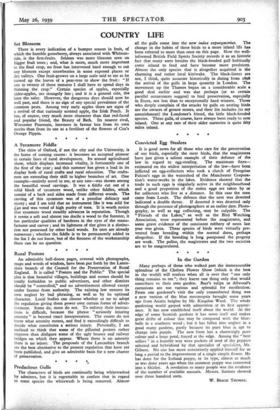 Convicted Egg Stealers It is good news for all those

who care for the preservation of our birds, especially the rarer birds, that the magistrates have just given a salient example of their defence of the law in regard to egg-stealing. The maximum fines— estimated on the widest interpretation of the law—have been inflicted on egg-collectors who took a clutch of Peregrine Falcon's eggs in the watershed of the Manchester Corpora- tion's water-works in the lakes. Evidence showed that the trade in such eggs is singularly active in the neighbourhood and a good proportion of the stolen eggs are taken by or for collectors who live at a distance. In this case the men came from Leeds. The defence that the nest was deserted indicated a double threat. If deserted it was deserted only through the presence of photographers at an earlier date. Photo- graphy, as well as egg collecting, may be culpable. The "Friends of the Lakes," as well as the Bird Watching Association, were represented before the magistrates, and some grave evidence of the consistent robbery of nests last year was given. These species of birds were virtually pre- vented from breeding within the normal dates, perhaps altogether. If the breeding is long postponed the progeny are weak. The police, the magistrates and the two societies are to be congratulated.