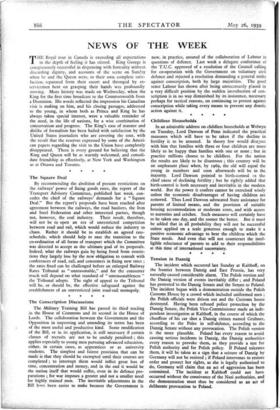 Page 2, 26 May 1939 — Childless Households In an admirable address on childless households at
Close

Childless Households In an admirable address on childless households at

Welwyn on Tuesday, Lord Dawson of Penn indicated the practical measures which will have to be taken if the decline in fertility is to be arrested. In theory few would disagree with him that families with three or four children are more likely to be happy than families with one or none ; but in practice millions choose to be childless. For the nation the results are likely to be disastrous ; this country will be an unpleasant place when, by 1969, the old will equal the young in numbers and soon afterwards will be in the majority. Lord Dawson pointed to birth-control rs the chief cause of declining fertility ; but he rightly added that birth-control is both necessary and inevitable in the modern world. But the power it confers cannot be exercised wisely unless the economic disadvantages of having children are removed. Thus Lord Dawson advocated State assistance for parents of limited means, and the provision of suitable housing accommodation at moderate rents, and with access to nurseries and creches. Such measures will certainly have to be taken one day, and the sooner the better. But it must be added that in all probability they will not be successful unless applied on a scale generous enough to make it a positive economic advantage to bear the children which the State needs. And even that will not counteract the intel- ligible reluctance of parents to add to their responsibilities at this time of international uncertainty.