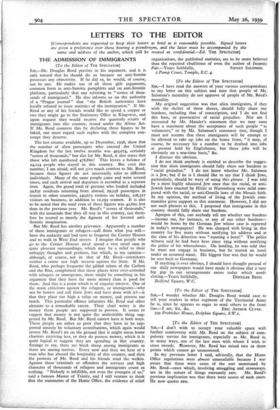 [Correspondents are requested to keep their letters as brief as is reasonably possible. Signed letters are given a preference over those bearing a pseudonym, and the latter must be accompanied by the name and address of the author, which will be treated as confidential.—Ed. THE SPECTATOR]

THE ADMISSION OF IMMIGRANTS

Sta,—Mr. Douglas Reed persists in his argument, and it is only natural that he should do so because no anti-Semite possesses any objectivity. If he did so, he would, of course, not be one. He makes use of all those glib arguments, common form in anti-Semitic pamphlets and on anti-Semitic platform, particularly that one referring to "scores of thou- sands of immigrants." He also informs us on the authority of a "Prague journal" that "the British authorities have loyally refused to issue statistics of the immigration." If Mr. Reed or any of his friends would like to spend a copper or two they might go to the Stationery Office in Kingsway, and upon request they would receive the quarterly return of immigrants into this country, issued under the Aliens Act. If Mr. Reed counters this by declaring these figures to be faked, one must regard such replies with the complete con- tempt they deserve.

The last returns available, up to December, 1938, show that the number of alien passengers who entered the United Kingdom for the last twelve months was 493,074, certainly "scores of thousands," but alas for Mr. Reed, it also states that those who left numbered 478,860! This leaves a balance of 14,124 people who stayed in this country. But even this number, I am afraid, will not give much comfort to Mr. Reed, because these figures do not necessarily refer to different individuals. Many of the same people came and went several times, and each arrival and departure is recorded as a separate item. Again, the grand total of persons who landed included 39,831 residents returning from abroad, 29,258 passengers in transit to other countries, 240,675 visitors on holiday, 108,317 visitors on business, in addition to 11,193 seamen. It is also to be noted that the total even of these figures was 42,600 less than in the previous year. Mr. Reed's "scores of thousands," with the innuendo that they all stay in this country, can there- fore be treated as merely the figment of his fevered anti- Semitic imagination.

But Mr. Reed has another grievance. Apparently a number of these immigrants or refugees call them what you will— have the audacity and bad taste to frequent the Corner Houses and to walk in West End streets. I imagine that people who go to the Corner Houses need spend a very small sum in quite pleasant surroundings, which may be a relief to their unhappy thoughts and position, but which, in my opinion— although, of course, not in that of Mr. Reed—constitutes neither a crime nor high treason against the State. If Mr. Reed, who perhaps frequents the gilded salons of the Carlton and the Ritz, complained that these places were over-crowded with refugees or immigrants, there might be something in his argument that they have far more money than is good for them. And this is a point which is of singular interest. One of the main criticisms against the refugees, or immigrants—why not be honest and call them Jews and have done with it?—is that they place too high a value on money, and possess too much. This particular offence infuriates Mr. Reed and other altruists to a remarkable extent. Their chief worry is the money these people are supposed to possess. It seems to suggest that money is not quite the undesirable thing sug- gested by Mr. Reed. But Mr. Reed cannot have it both ways. These people are either so poor that they have to be sup- ported entirely by voluntary contributions, which again would arouse Mr. Reed's ire on the ground that it might mean home charities receiving less, or they do possess money, which it is quite logical to suggest they are spending in this country. Strange to say, there are black sheep among immigrants as there are among natives. Every now and then we hear of a man who has abused the hospitality of this country, and then the protests of Mr. Reed and his friends rend the welkin. Against these –criminals or offenders the services and high character of thousands of refugees and immigrants count as nothing. "Nobody is infallible, not even the youngest of us," said a famous Master of Trinity, and I still venture to think that the statements of the Home Office, the evidence of relief organisations, the published statistics, are to be more believed than the repeated ebullitions of even the author of Insanity Fair.—Yours faithfully, SIDNEY SALOMON. 2 Pump Court, Temple, E.C. 4.