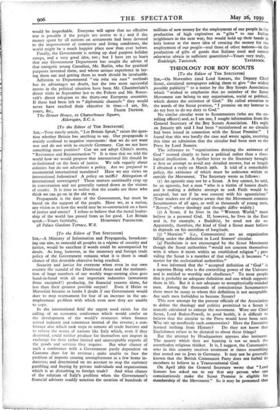 [To the Editor of THE SPECTATOR] SIR,—A Ministry of Information

and Propaganda, broadcast- ing our aim, to remould all peoples in a regime of security and justice, would be excellent if words could be accompanied by deeds. As long, however, as the monetary and foreign trade policy of the Government remains what it is there is small chance of this desirable objective being reached.

Security and justice for everyone when even in our own country the scandal of the Distressed Areas and the malnutri- tion of huge numbers of our weekly wage-earning class goes hand-in-hand with all our important industries (armament firms excepted!) producing, for financial reasons alone, far less than their greatest possible output! Even if Hitler or Mussolini became as lambs I doubt if our Government would dare to stop rearmament for fear of an increase in the un- employment prDblem with which even now they are unable to cope.

In the international field the urgent need exists for the calling of an economic conference which would confer on the development of the world's resources when finance served industry and commerce instead of the reverse; a con- ference also which took steps to remove all trade barriers and to relieve the wants of nations like Italy which, even if they disarmed, could neither produce for themselves nor import in exchange for their rather limited and unacceptable exports all the goods and services they require. But what chance of such a conference with a Government partly dependent on Customs dues for its revenue ; quite unable to face the problem of imports causing unemployment in a few home in- dustries; and determined on no account to stop the currency

gambling and buying by private individuals and organisations which is so disturbing to foreign trade? And what chance of the solution of Italy's problem when the Government's financial advisers readily sanction the creation of hundreds of

millions of new money for the employment of our people in the production of high explosives as "gifts" to our Italian neighbours in the next war; but would hold up their hands in holy horror at the mere idea of creating the money for the employment of our people—and those of other nations—in the production of gifts of goods that Italians need and cannot otherwise obtain in sufficient quantities?—Yours very truly,