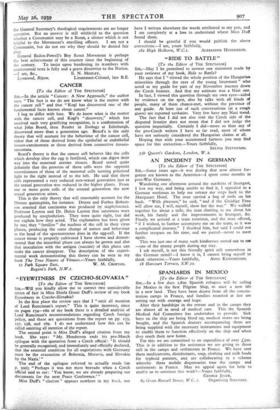 [To the Editor of THE SPECTATOR] you kindly allow me to correct two considerable errors of fact in Miss Shiela Grant Duff's review of my book Eyewitness in Czecho-Slovakia?

In the first place the review says that I "omit all mention of Lord Runciman's report." This is quite incorrect, since on pages 154-160 of my book there is a detailed analysis of Lord Rtmciman's recommendations regarding Czech foreign policy, and there are quotations from the report on pp. 155, 157, 158, and 169. I do not understand how this can be called omitting all mention of the report.

The second point is Miss Duff's alleged citation from my book. She says: " Mr. Henderson ends his pre-March epilogue with the quotation from a Czech official : 'It should be generally recognised, and immediately and officially declared, that the essential condition for all negotiations with Germany must be the evacuation of Bohemia, Moravia, and Slovakia by the Nazis.'"

The end of the epilogue referred to actually reads (on P. 300); "Perhaps it was not mere bravado when a Czech official said to me: You know, we are already preparing our documents for the next Peace Conference.'"

Miss Duff's " citation " appears nowhere in my book, not

have I written elsewhere the words attributed to my pen, and I am completely at a loss to understand where Miss Dud found them.

I should be grateful if you would publish the above corrections.—I am, yours faithfully,