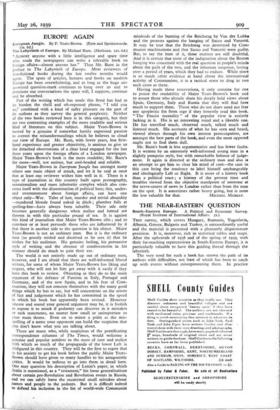 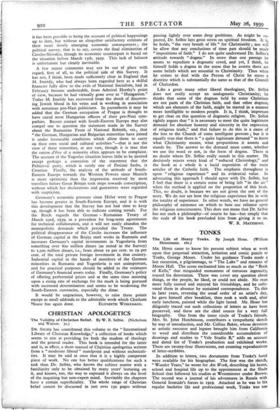 THIS survey, which covers Hungary, Rumania, Yugoslavia, Albania, Greece, Bulgaria and Turkey, is extraordinarily useful and the material is presented with a pleasantly dispassionate precision. It is, moreover, rich in statistical tables and maps. After the upheavals of 1938 and of the spring of 1939, with their far-reaching repercussions in South-Eastern Europe, it is particularly valuable to have this guiding thread through the labyrinth.

The very need for such a book has strewn the path of its authors with difficulties, not least of which has been to catch up with events without misrepresenting them. In practice

it has been possible to bring the account of political happenings up to date, but without an altogether satisfactory estimate of their more slowly emerging economic consequences ; the political survey, that is to say, covers the final elimination of Czecho-Slovakia, though its economic counterpart is based on the situation before March 15th, 1939. This lack of balance is unfortunate but clearly inevitable.

A few minor comments may not be out of place with regard, first of all, to the political side of this Survey. It has not, I think, been made sufficiently clear in England that M. Imredy, who had always been regarded here as a skilful financier fully alive to the evils of National Socialism, had in February become undesirable, from Admiral Horthy's point of view, because he had virtually gone over to " Hungarism." Today M. Imredy has recovered from the shock of discover- ing Jewish blood in his veins and is working in association with notorious pro-Nazi politicians. In parenthesis it may be added that the German occupation of Prague is thought to have cured most Hungarian officers of their pro-Nazi sym- pathies. Recent contact with South-Eastern Europe may also compel one to question the statement made in the Survey about the Rumanian Front of National Rebirth, viz., that "the German, Hungarian and Bulgarian minorities have joined it under favourable conditions which allow them to carry on their own social and cultural activities "—that is not the view of these minorities, at any rate, though it is true that the raison d'être of a minority often appears to be complaint. The account of the Yugoslav situation leaves little to be desired except perhaps a correction of the statement that the PribieeviC party, which is surely one of PreCani Serbs, is Croatian. Finally, the analysis of the attitude of South- Eastern Europe towards the Western Powers since Munich is more optimistic than the impression received by most travellers before Great Britain took steps towards conscription, without which her declarations and guarantees were regarded with scepticism.

Germany's economic pressure since Hitler went to Prague has become greater in South-Eastern Europe, and it is with this development that the Survey has not had time to keep up, though it has been able to indicate coming trends. For the Reich regards the German - Rumanian Treaty of March 23rd, 1939, as a precedent for long-term agreements for technical collaboration, and it will not easily abandon the monopolistic demands which preceded the Treaty. The political disappearance of the Czechs increases the influence of German capital at the Resita steel works in Rumania and increases Germany's capital investments in Yugoslavia from something over 800 million dinars (as stated in the Survey) to 1,5oo million dinars, i.e., from about to per cent. to 19 per cent. of the total private foreign investment in that country. Industrial capital in the hands of members of the German minorities in Rumania and Yugoslavia is not unimportant, and for practical purposes should be added to the estimates of Germany's financial assets today. Finally, Germany's policy of offering preferential prices and at the same time insisting upon a rising rate of exchange for the mark is being pursued with increased determination and seems to be weakening the South-Eastern currencies, especially the dinar.

It would be ungracious, however, to raise these points except as small addenda to the admirable work which Chatham