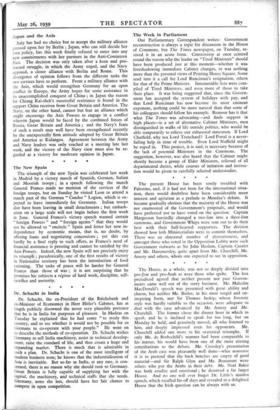 the ex-President of the Rtichsbank and ex-Minister of Economics in Herr Hitler's Cabinet, has at length publicly disowned the never very plausible pretence that he is in India for purposes of pleasure. In Madras on Tuesday he explained that he had come "to study this country, and to see whether it would not be possible for us Germans to co-operate with your people." He went on to describe the methods of co-operation. Dr. Schacht wishes Germany to sell India machinery, assist in technical develop- ment, raise the standard of life, and thus create a huge and expanding market. There is much that is admirable in such a plan. Dr. Schacht is one of the most intelligent of modern business men; he knows that the industrialisation of Asia is inevitable. But so.lar as India, at any rate, is con- cerned, there is no reason why she should turn to Germany. Great Britain is fully capable of supplying her with the capital, the machinery, and technical staffs that she needs. Germany, none the less, should have her fair chance to compete in open competition.