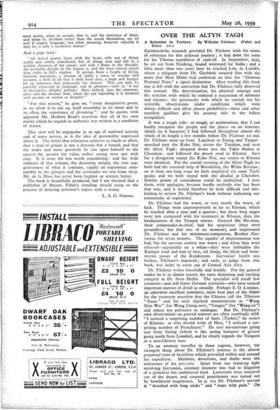 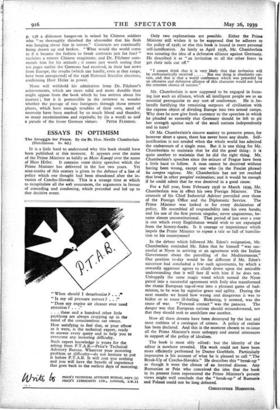 OVER THE ALTYN TAGH

GamiscNrric research provided Dr. Filchner with his terms of reference for this arduous journey ; it had done the same for his Tibetan expedition of 1926-28. In September, i93s

he set out from Nanking, bound westward for India ; and a little more than two years later he reached Leh, in Ladakh,

where a telegram from Dr. Goebbels awaited him with the news that Herr Hitler had conferred on him the "German National Prize," a signal distinction. After reading this book one is left with the conviction that Dr. Filchner fully deserved this reward. His determination, his physical courage and the stoicism with which he endured a succession of ailments and injuries : the pertinacity with which he carried out his scientific observations under conditions which were always difficult and often almost prohibitive—these and other manifest qualities give his journey title to the fullest recognition.

It was a rough ride: so rough, so acrimonious, that I can hardly recognise the people and the places on an itinerary which (as it happens) I had followed throughout almost the whole of its length a few months before Dr. Filchner set out. Dr. Filchner went up from Lanchow to Sining and Tangar: marched past the Koko Nor, across the Tsaidam, and over the Altyn Tagh : dropped down into the Talda Makan at Cherchen: and followed the desert road to Khotan. Save for a divagation round the Koko Nor, our routes to Khotan were identical. For the crucial crossing of the Altyn Tagh we both had the essential help of Borodishin, the White Russian ; on at least one long stage we both employed the same Turki guide; and we both stayed with the aksakal at Cherchen.

Similar points of coincidence could be multiplied. I note them, with apologies, because hardly anybody else has been that way, and it would therefore be both difficult and mis- leading to review Dr. Filchnees book without indicating our community of experience.

Dr. Filchner had the worst, or very nearly the worst, of luck. Things went unprosperously as far as Khotan, which he reached after a year and a quarter ; but these long stages were jam compared with his treatment in Khotan, then the headquarters of the Tungan armies. General Ma Ho-shan, their commander-in-chief, had his suspicions (they were groundless, but that was of no moment), and imprisoned Dr. Filchner and his mistionary-companion, Brother Ger- vasius, for seven months. The squalor of imprisonment was bad, but the nervous anxiety was worse ; and when they were released—apparently on a whim—they were forbidden the Kashgar road and had to face, viii Sanju, the bleak and bone- strewn passes of the Karakorum. Gervasius' health was broken, Filchnees impaired ; and each, to judge from this book, was lucky to come out of Central Asia alive.

Dr. Filchner writes forcefully and frankly. For the general. reader he is in almost exactly the same disarming and exciting

category as Dr. Sven Hedin. The specialist will recall few

an otherwise excellent translator, must bear part of the blame

Shin Wai" (for Wang Ching-wei), "Vangya" (for "Wang-ye") and others too pervasive to catalogue. But Dr. Filchnees own observations on general matters are often startlingly wild.

east from Sining (which is like seeing hampers of grousl. going north from London), and he clearly regards the Tungans as a non-Chinese race.

To an amateur traveller in those regions, however, the strangest thing about Dr. Filchnees journey is the almoSt perpetual state of hostilities which prevailed within and around

his expedition. Mutinies, desertions, and thefts were the milestones of his prc.-.:Eess. Apart from one stand-up fight

involving Gervasius, constant recourse was had to litigation

of a primitive but embittered kind. Lawcourts were conjured out of the desert, and corporal punishment was meted out-

by bewildered magistrates. In p. 112 Dr. Filchnees servant is "thrashed with long sticks" and "roars with pain." Oil p. 138 a dishonest hanger-on is seized by Chinese soldiers who "so thoroughly thrashed the absconder that his flesh was hanging about him in tatters." Contracts are continually being drawn up and broken. "What would the world come to if it became the fashion to break contracts just for fun? " exclaims a remote Chinese magistrate, and Dr. Filchner com- mends him for his attitude ; it seems just worth noting that ten pages earlier the Germans had received, in their last news from Europe, the results (which can hardly, even at that range, have been unexpected) of the 1936 National Socialist elections, confirming Herr Hitler in power.

None will withhold his admiration from Dr. Filchner's achievements, which are more solid and more durable than might appear from the book which he has written about his journey ; but it is permissible in the reviewer to wonder whether the passage of two foreigners through those remote places, which have enough troubles of their own, need of necessity have been marked by so much blood and thunder, so many recriminations and reprisals; by (in a word) so naif

a parade of the lesser German virtues. PETER FLEMING.