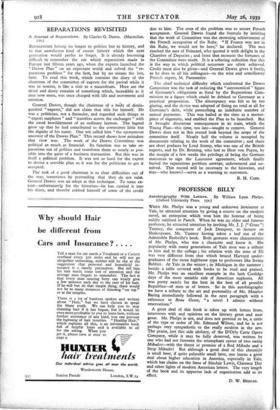 A Journal of Reparations. By Charles G. Dawes. (Marmillan

REPARATIONS belong no longer to politics but to history, and to that unwelcome kind of recent history which the next generation would prefer to forget. It is already becoming difficult to remember the stir which reparations made in Europe just fifteen years ago, when the experts launched the "Dawes Plan" on an expectant world and solved the "re- parations problem" for the first, but by no means the last, time. To read this book, which contains the diary of the chairman of the committee of experts for the period while it was in session, is like a visit to a mausoleum. Here are the dried and dusty remains of something which, incredible as it may now seem, was once charged with life and movement and emotion.

General Dawes, though the chairman of a boay of distin- guished "experts," did not claim that title for himself. He was a politician, not a financier, and regarded such things as "export surpluses" and "transfers across the exchanges" with the awed bewilderment of an ordinary layman. The legend grew up that he had contributed to the committee little but the dignity of his name. One wit called him "the eponymous ancestor of the Dawes Plan." This record shows how mistaken that view was. The work of the Dawes Committee was political as much as financial. Its function was to take re- parations out of politics and transform them as nearly as pos- sible into the guise of a business transaction. But this was in itself a political problem. It was not so hard for the expert to devise a sensible plan as it was for the politician to get it accepted.

The task of a good chairman is to clear difficulties out of the way, sometimes by pretending that they do not exist. General Dawes was an adept at this technique. To some ex- tent—unfortunately for the historian—he has carried it into his diary, and thereby robbed himself of some of the credit

due to him. The crux of the problem was to secure French acceptance. General Dawes found the formula by insisting that the work of Committee was the crowning achievement of the French occupation of the Ruhr. "If France was not in the Ruhr, we would not be here," he declared. The mot reached the ears of Poincare, who quoted it with delight in the Chamber of Deputies ; and from that moment the fortunes of the Committee were made. It is a sobering reflection that this is the way in which political successes are often achieved. Credit must also be given—and General Dawes gives it freely, as he does to all his colleagues—to the wise and conciliatory French expert, M. Parmentier.

The chief technical difficulty which confronted the Dawes Committee was the task of reducing the "astronomical figure of Germany's obligations as fixed by the Reparations Com- mission to a figure which could be debited to Germany as a practical proposition. The discrepancy was felt to be too glaring, and the device was adopted of fixing no total at all for Germany's debt, while prescribing an indefinite number of annual payments. This was hailed at the time as a master- piece of ingenuity, and enabled the Plan to be launched. But it brought disastrous consequences in its train, which the Young Plan—this time, too late—sought to remove. General Dawes does not in this record look beyond the scope of the committee itself. Nearly half the volume is occupied by documents relating to the work of the committee ; and there are short prefaces by Lord Stamp, who was one of the British experts, and by Dr. Bruning, who lost to Herr von Papen, by the margin of a few weeks the privilege of being the German statesman to sign the Lausanne agreement, which finally buried the reparations problem unwept, unhonoured and un- solved. This record will be necessary to the historian, and may—who knows?—serve as a warning to statesmen.