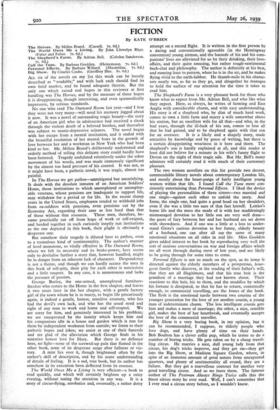 By KATE O'BRIEN The Heroes. By Millen Brand. (Cassell. 78. 6d.) The World Owes Me a Living. By John Llewelyn Rhys. (Faber and Faber. 75. 6d.) The Shepherd's Farm. By Adrian Bell. (Cobden Sanderson.

ALL six of the novels on my list this week can be loosely described as "readable," and with luck each should find its own brief market, and be found adequate therein. But the only one which raised real hopes in this reviewer at first handling was The Heroes, and by the measure of those hopes it is disappointing, though interesting, and even spasmodically impressive, by serious standards.

No one who read The Outward Room last year—and I fear they were not very many—will need his memory jogged about it now. It was a novel of outstanding tragic beauty—the story of an American girl who in adolescence had received a shock through the violent death of a beloved brother, and thereafter was subject to manic-depressive seizures. The novel began with her escape from a mental institution, and it ended with the beautiful resolution of her mental fears in the growth of love between her and a workman in New York who had been kind to her. Mr. Millen Brand's deliberately undertoned and orderly method of telling this delicate story could hardly have been bettered. Tragedy undulated relentlessly under the sober movement of his words, and was made immensely significant by the almost too hard pressure of his control. It was not, as it might have been, a pathetic novel; it was tragic, almost too painful. In The Heroes we get pathos—unmitigated but unsatisfying. It deals with the desolate inmates of an American Soldiers' Home, those institutions to which unemployed or unemploy- able veterans, whose pensions are inadequate to support life, may withdraw for a period or for life. In the recent slump years in the United States, employers tended to withhold jobs from ex-soldiers with pensions, even pensions cut by the Economy Act, regarding their case as less hard than that of those without that resource. These men, therefore, be- came practically cut off from hope of work or self-respect, and herded together in such curiously ineptly run institutions as the one depicted in this book, their plight is obviously a desperate one.

But somehow their tragedy is diluted here to pathos, even to a tremulous kind of sentimentality. The author's manner of level monotone, so vitally effective in The Outward Room, where we felt its necessity and its brake-power, here seems only to devitalise further a story that, however handled, might be in danger from an inherent lack of character. Despondency is not a theme, and though we can hardly accuse the men in this book of self-pity, their pity for each other is narcissistic and a little suspect. In any case, it is monotonous and lacks the pressure of passion.

George Burley, the one-armed, unemployed furniture- finisher who comes to the Home in the first chapter, and leaves it two years later in the last chapter, with a gentle factory girl of the town whom he is to marry, to begin life precariously again, is indeed a gentle, honest, sensitive creature, who has had the devil's own luck, and who has the usual need and right of any man to work and home and self-respect. We are sorry for him, and genuinely interested in his problem; we are exasperated by the inanity which keeps him and his companions idle in a house and garden which is run for them by independent workmen from outside; we listen to their pathetic hopes and jokes; we assist at one of their funerals and are glad of the alleviation which George finds in his tentative honest love for Mary. But there is no defiance here, no fight—none of the screwed-up pain that flamed in the other book, none of its desperate surge after fullness or vic- tory. A mist lies over it, though brightened often by the author's skill of description, and by his acute understanding of details of feeling. It is a sad, true book, but its author has somehow in its execution been deflected from its essence.

The World Owes Me a Living is very efficient—a book to read. quickly, and which will certainly brighten up a rainy

evening, without taxing the attention in any way. It is a story of circus-flying, aerobatics and, eventually, a rather dotty attempt on a record flight. It is written in the first person by a daring and conventionally agreeable (in the Hemingway convention) young airman, and the hazards of his and his com- panions' lives are alleviated for us by their drinking, their love- affairs, and their quite amusing, but rather tough-sentimental back-chat and philosophy. The author is definitely at his best, and running least to pattern, when he is in the air, and he makes flying vivid to the earth-lubber. He thumb-nails in his charac- ters neatly too, as far as they go, and altogether he manages to hold the surface of our attention for the time it takes to read him.

The Shepherd's Farm is a very pleasant book for those who know what to expect from Mr. Adrian Bell, and who like what they expect. Here, as always, he writes of farming and East Anglia with considerable charm, and with easy understanding. His story is of a shepherd who, by dint of much hard work, comes to own a little farm and marry a wife somewhat above his station, but an excellent wife for all that—and who, in the bad years, through the ill-luck of his son, comes to lose all that he had gained, and to be shepherd again with that son for an overseer. It is a likely and a shapely story, made attractive by knowledge and by grace of writing, but there is a certain disappointing weariness in it here and there. The shepherd's son is hardly explained at all, and this reader at least did not believe for a minute in his wife's funny flight to Devon on the night of their tragic sale. But Mr. Bell's many admirers will certainly read it with much of their customary pleasure.

The two women novelists on this list provide two decent, commendable library novels about contemporary London life, and mostly about the heart-pangs of fairly intelligent young women within that life. I found Call the Tune more con- sistently entertaining than Personal Effects. I liked the device of playing the personalities of three sisters—two married and one single—against each other to unfold the story. And Irene, the single one, had quite a good head on her shoulders, even if she was a little too sure of that fact herself. Lettice's home life and the mess she made of it with her maddeningly mismanaged devotion to her little son are very well done— the gusts of fury between her and her husband are set down with shrewdness. And if one was a little at a loss to under- stand Greta's curious devotion to her funny, elderly beauty of a husband, one can after all say the same of many emotional situations on all sides in real life. Miss Goolden gives added interest to her book by reproducing very well the sort of anxious conversations on war and foreign affairs which we all went through during most of last year, and are likely to be going through for some time to come.

Personal Effects is not so much on the spot, as its irony is directed against the elderly members of a prosperous, bour- geois family who discover, at the reading of their father's will, that they are all illegitimate, and that his true heir is the grandson of a marriage they had not known about. Their reactions to this heir, his to them, and the muddles by which his fortune is dissipated, so that he has to return, contentedly enough, to commercial travelling, are the bones of the book. The flesh is the emotional tussle between two cousins of the younger generation for the love of yet another cousin, a young man of indeterminate charm. The less intelligent cousin gets him and makes a mess of marriage; the other, a nice, sensible girl, makes the best of her heartbreak, and eventually accepts the love of the commercial traveller.

Big Show is a very boring book, in my opinion, but it can be recommended, I suppose, to elderly people who love dogs, and have plenty of time on their hands. Bob Boulton has a clever collie pup, which he trains to do a number of boring tricks. He gets taken on by a cheap travel- ling circus. He marries a nice, dull young lady from that circus, his dog's tricks improve, and they get on—they get into the Big Show, at Madison Square Garden, where, in spite of an immense amount of good nature from unexpected quarters, and plenty of sentimentality all round, they are a failure. But they get a marvellous contract for another very good travelling circus. And so we leave them. The famous author of The Postman Always Rings Twice calls this the finest circus story he ever read. Well, I can't remember that I ever read a circus story before, so I wouldn't know.