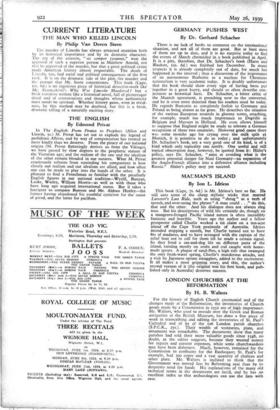 LONDON CHURCHES AT THE REFORMATION By H. B. Walters For

the history of English Church ceremonial and of the changes made at the Reformation, the inventories of Church goods made by a Commission in 1552 are of high importance. Mr. Walters, who used to preside over the Greek and Roman antiquities at the British Museum, has done a fine piece of work in transcribing and editing the inventories of St. Paul's Cathedral and of 95 of the ro6 London parish churches (S.P.C.K., 25s.). Their wealth of vestments, plate, and ornaments was remarkable. The documents show that many parishes had sold their more valuable- goods since 1548, no doubt, as the editor suggests, because they- wanted money for repairs and current expenses, while some churchwardens may have been dishonest. Much, however, remained for the Commission to confiscate for the Exchequer; St. Paul's for example, had 300 copes and a vast quantity of chalices and other plate. Mr. Walters is inclined to think that the Government was moved less by Reforming zeal than by its desperate need for funds His explanations of the many old technical terms in the documents are lucid, and he has an excellent index so that archaeologists can use the lists with ease.