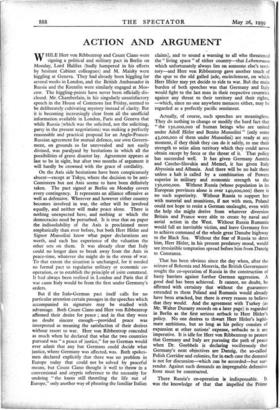 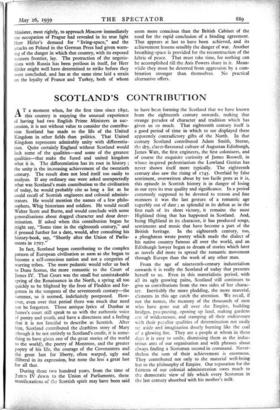 WHILE Herr von Ribbentrop and Count Ciano were signing a political and military pact in Berlin on Monday, Lord Halifax (badly hampered in his efforts by hesitant Cabinet colleagues) and M. Maisky were higgling at Geneva. They had already been higgling for several weeks in London, and the British Ambassador in Russia and the Kremlin were similarly engaged at Mos- cow. The higgling-points have never been officially dis- closed. Mr. Chamberlain, in his singularly unsatisfactory speech in the House of Commons last Friday, seemed to be deliberately cultivating mystery instead of clarity. But it is becoming increasingly clear from all the unofficial information available in London, Paris and Geneva that while Russia (which was the solicited, not the soliciting, party in the present negotiations) was making a perfectly reasonable and practical proposal for an Anglo-Franco- Russian agreement for mutual defence, our own Govern- ment, on grounds so far unrevealed and not easily divined, was paralysed by hesitations in which all the possibilities of grave disaster lay. Agreement appears at last to be in sight, but after two months of argument it will hardly be crowned with the grace of cordiality.

On the Axis side hesitations have been conspicuously absent—except at Tokyo, where the decision to be anti- Comintern but not Axis seems to have been definitely taken. The pact signed at Berlin on Monday covers every contingency. It represents an alliance offensive as well as defensive. Wherever and however either country becomes involved in war, the other will be involved equally, and neither will make peace alone. There is nothing unexpected here, and nothing at which the democracies need be perturbed. It is true that on paper the indissolubility of the Axis is proclaimed more emphatically than ever before, but both Herr Hitler and Signor Mussolini know 'What paper declarations are worth, and each has experience of the valuation the other sets on them. It was already clear that Italy could no longer dare to break away from the Axis in peace-time, whatever she might do in the stress of war. To that extent the situation is unchanged, for it needed no formal pact to regularise military or economic co- operation, or to establish the principle of joint command. It had always been realised in London and Paris that if war came Italy would be from the first under Germany's orders.

But if the halo-German pact itself calls for no particular attention certain passages in the speeches which accompanied its signature may be studied with advantage. Both Count Ciano and Herr von Ribbentrop affirmed their desire for peace ; and in that they were no doubt sincere enough—provided peace was interpreted as meaning the satisfaction of their desires without resort to war. Herr von Ribbentrop conceded as much when he declared that what the two countries pursued was "a peace of justice," for no German would ever admit that any but Germans could decide what justice, where Germany was affected, was. Both spokes- men declared explicitly that there was no problem in Europe today that could not be solved by peaceful means, but Count Ciano thought it well to throw in a conventional and cryptic reference to the necessity for undoing "the knots still throttling the life out of Europe," only another way of phrasing the familiar Italian claims), and to sound a warning to all who threatened the "living space "of either country—that Lebensraum which unfortunately always lies on someone else's terri- tory—and Herr von Ribbentrop gave another touch of the spur to the old galled jade, encirclement, on which Herr Hitler may yet decide to ride to war. But the main burden of both speeches was that Germany and Italy would fight to the last man in their respective countries against any threat to their territory and their rights, —which, since no one anywhere menaces either, may be regarded as a perfectly pacific sentiment.

Actually, of course, such speeches are meaningless. They do nothing to change or modify the hard fact that "the 150,000,000 of human beings who are united under Adolf Hitler and Benito Mussolini" (only some 43,000,000 of them under Mussolini) are ready at any moment, if they think they can do it safely, to use their strength to seize alien territory which they could never obtain except by force or the threat of it. That policy has succeeded well. It has given Germany Austria and Czecho-Slovakia and Memel, it has given Italy Abyssinia and Albania. And there will be no halt there unless a halt is called by a combination of Powers superior in military and economic strength to the 150,000,000. Without Russia (whose population in its European provinces alone is over 140,000,000) there is no such superiority. Without Russia to support her with material and munitions, if not with men, Poland could not hope to resist a German onslaught, even with the help she might derive from whatever diversion Britain and France were able to create by naval and aerial action in the West. Without Russia Rumania would fall an inevitable victim, and leave Germany free to achieve command of the whole great Danube highway to the Black Sea. Without the fear of Russia to deter him, Herr Hitler, in his present predatory mood, would see irresistible temptation spread before him from Danzig to Constanza.

That has been obvious since the day when, after the seizure of Bohemia and Moravia, the British Government sought the co-operation of Russia in the construction of hasty barriers against further German aggression. A good deal has been achieved. It cannot, no doubt, be affirmed with certainty that without the guarantees extended to them Poland and Rumania would already have been attacked, but there is every reason to believe that they would. And the agreement with Turkey (as Mr. Walter Duranty records on a later page) is regarded in Berlin as the first serious setback to Herr Hitler's policy. No one desires to thwart Herr Hitler's legiti- mate ambitions, but so long as his policy consists of expansion at other nations' expense, setbacks to it are imperative. It is idle for Herr von Ribbentrop to protest that Germany and Italy are pursuing the path of peace when Dr. Goebbels is declaring vociferously that Germany's next objectives are Danzig, the so-called Polish Corridor and colonies, for in each case the demand is not for discussion—which can be accorded—but sur- render. Against such demands an impregnable defensive front must be constructed.

There Russia's co-operation is indispensable. It was the knowledge of that that impelled the Prime Minister, most rightly, to approach Moscow immediately the occupation of Prague had revealed in its true light Herr Hitler's demand for "living-space," and the attacks on Poland in the German Press had given warn- ing of the danger in which that country, with its exposed western frontier, lay. The protraction of the negotia- tions with Russia has been perilous in itself, for Herr Hitler might well have determined to strike before they were concluded, and has at the same time laid a strain on the loyalty of France and Turkey, both of whom seem more conscious than the British Cabinet of the need for the rapid conclusion of a binding agreement. That appears at last to have been achieved, and its achievement lessens sensibly the danger of war. Another breathing-space is provided for the reconstruction of the fabric of peace. That must take time, for nothing can be accomplished till the Axis Powers share in it. Mean- while they must be deterred from aggression by a com- bination stronger than themselves. No practical alternative offers.