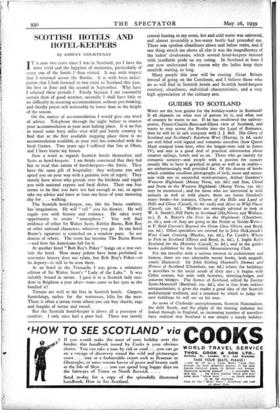 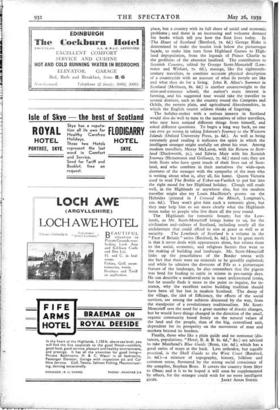 IT is now two years since I was in Scotland, yet I have the most vivid and the happiest of memories, particularly of every one of the hotels I then visited. It was with respect that I returned across the Border. It is with keen antici- pation that I look forward to two visits to Scotland this year, the first in June and the second in September. Why have I selected these periods ? Firstly because I am reasonably certain then of good weather, secondly I shall have little or no difficulty in securing accommodation without pre-booking, and thirdly prices will noticeably be lower than in the height of the season.

On the matter of accommodation I would give one word of advice. Telephone through the night before to reserve your accommodation at your next halting place. It is no fun to travel some forty miles over wild and lonely country to find that at the first available stopping place there is no accommodation available, as your visit has coincided with the local Games. Two years ago I suffered that fate at Oban, and I have learnt my lesson.

Now a word as regards Scottish hotels themselves and Scots as hotel-keepers. I am firmly convinced that they bid fair to rival that nation of hotel-keepers—the Swiss. They have the same gift of hospitality: they welcome you and speed you on your way with a genuine note of regret. They mostly have wives who preside over the kitchens and regale you with national repasts and local dishes. Their one fear seems to be that you have not had enough to eat, so again take my advice and leave at least one hour of your motoring . day for . . . walking.

The Scottish hotel-keeper, too, like his Swiss confrere, has imagination. He will " sell " you his district. He will regale you with history and romance. He takes every opportunity to create "atmosphere." You will find evidence of either Sir Walter Scott, Rabbie Burns, Rob Roy or other national characters, wherever you go. In one hotel Burns's signature is scratched on a window pane. So are dozens of others. The room has become The Burns Room —and how the Americans fall for it.

At another hotel "Rob Roy's Poker" hangs on a tree out- side the hotel. How many pokers have been purloined as souvenirs history does not relate, but Rob Roy's Poker—or its deputy—is still to be seen there.

At an hotel in the Trossachs I was given a miniature edition of Sir Walter Scott's "Lady of the Lake." It was suitably bound in tartan. I gave it to a Scottish lady resi- dent in Brighton a year after—tears came to her eyes as she fondled it!

Tartans are well to the fore in Scottish hotels. Carpets, furnishings, sashes for the waitresses, kilts for the men. There is often a tartan room where you can buy shawls, rugs and lengths of tartan and tweed.

But the Scottish hotel-keeper is above all a purveyor of comfort. I only once had a poor bed. There was mostly central heating in my room, hot and cold water was universal, and almost invariably a hot-water bottle had preceded me. There was spotless cleanliness above and below stairs, and if one thing struck me above all else it was the magnificence of the ladies' cloakrooms, which several hotel-keepers insisted with justifiable pride on my seeing. In Scotland at least I can now understand the reason why the ladies keep their menfolk waiting so long.

Many people this year will be touring Great Britain instead of going on the Continent, and I believe those who do so will find in Scottish hotels and Scottish hotel-keepers courtesy, cleanliness, individual characteristics, and a very high appreciation of the culinary arts.

WHAT are the best guides for the holiday-maker in Scotland? It all depends on what sort of person he is, and what sort of country he wants to see. If he has swallowed the railway- poster, Prince-Charlie-Bens-and-Glens view of Scotland, and wants to step across the Border into the Land of Romance, then he will be in safe company with J. J. Bell. His Glory of Scotland and Scotland's Rainbow West (Harrap, 7s. 6d. each) are well filled with legend and romantic anecdote (how Queen Mary escaped from here, what the beggar-man said to James IV), and mix in a good deal of practical information about steamer sailings, hotels and so on. Those who go mainly for romantic scenery—and people with a passion for scenery usually like to have it gratified in print as well as in reality— are embarrassingly well provided for. Of the dozens of books which combine excellent photographs of loch, moor and moun- tain with not so successful word-pictures, Arthur Gardner's Western Highlands (Moray Press, los. 6d.) and Sun, Cloud and Snow in the Western Highlands (Moray Press, 12s. 6d.) may be mentioned ; and for those who are interested in wild animals as well as wild places, there are Seton Gordon's many books—for instance, Charm of the Hills and Land of Hills and Glens (Cassell, 7s. 6d. each) and Afoot in Wild Places (Cassell, I2S. 6d.). Walkers are strongly advised to look at W. A. Smith's Hill Paths in Scotland (MacNiven and Wallace, 2s.), E. A. Baker's On Foot in the Highlands (Chambers, 2s. 6d.), and—if they are going to the North or North-West— at F. Reid Corson's Beyond the Great Glen (Oliver and Boyd, Jos. 6d.). Other specialists are catered for in John McLintock's West Coast Cruising (Blackie, los. 6d.), Pat Castle's Where to Fish in Scotland (Oliver and Boyd, 3s. 6d.), J. Inglis Ker's Scotland for the Motorist (Cassell, 7s. 6d.), and in the guide- books published by the Scottish Mountaineering Club.

For the traveller with a serious interest in architecture and history, there are two admirable recent books, both magnifi- cently illustrated. Sir John Stirling Maxwell's Shrines and Homes of Scotland (Chambers, los. 6d.) relates the buildings it describes to the social needs of their day ; it begins with Celtic crosses, but ends with factories, shooting-lodges and concrete bridges. The Stones of Scotland, edited by George Scott-Moncrieff (Batsford, los. 6c1.), also is free from tedious antiquarianism; it gives the reader a good idea of the Scottish architectural tradition, and a standard by which to judge the new buildings he will see on his tour.

As news of Clydeside unemployment, Scottish Nationalism, the drift South, and the plight of the herring industry has leaked through to England, an increasing number of travellers have realised that Scotland is not simply a handy holiday- place, but a country with its full share of social and economic problems ; and there is an increasing and welcome demand for books which tell you how the Scot lives today. In The Heart of Scotland (Batsford, 7s. 6d.) George Blake is determined to make the tourist look below the picturesque façade, to make him turn from Highland Games to High- land depopulation, from the legends of Prince Charlie to the problems of the absentee landlord. The contributors to Scottish Country, edited by George Scott-Moncrieff (Law- rence and Wishart, 7s. 6d.), manage, like the eighteenth- century travellers, to combine accurate physical description of a countryside with an account of what its people are like and what they do for a living. John R. Allan's Summer in Scotland (Methuen, 8s. 6d.) is another counterweight to the mist-and-romance school; the author's main interest is farming, and his suggested tour would take the traveller to several districts, such as the country round the Campsies and Ochils, the eastern plain, and agricultural Aberdeenshire, in which the English tourist seldom thinks of lingering.

The holiday-maker with a serious interest in Scotland would also do well to turn to the narratives of other travellers, who may have noticed different things from himself, and asked different questions. To begin a long way back, no one can ever go wrong in taking Johnson's Journey to the Western Islands (Oxford University Press, 3s. 6d.). As well as being extremely good reading it indicates the spirit in which the intelligent stranger might usefully set about his tour. Among modern travellers, Moray McLaren, with his Return to Scot- land (Duckworth, 5s.), and Edwin Muir with his Scottish Journey (Heinemann and Gollancz, 7s. 6d.) stand out; they are both Scots who have spent much of their lives out of Scot- land, and who combine in their narratives the wide-open alertness of the stranger with the sympathy of the man who is writing about what is, after all, his home. Queen Victoria used to read The Bothie of Tober-na-Vuolich to put her into the right mood for her Highland holiday. Clough still reads well, in the Highlands or anywhere else, but the modern traveller might also try Louis MacNeice's poems on the Hebrides (printed in I Crossed the Minch, Longman's, Jos. 6d.). They won't give him such a romantic glow, but they may help him to see more clearly what the Highlands mean today to people who live there all the year round.

The Highlands for romantic beauty; but the Low- lands, as Mr. Scott-Moncrieff brings home to us, for the civilisation and• culture of Scotland, including nearly all the architecture that could afford to aim at grace as well as at security. The Lowlands of Scotland is a volume in the "Face of Britain" series (Batsford, 8s. 6d.), but its great merit is that it never deals with appearances alone, but relates them to the social, economic, and religious factors that went to the making of building and landscape. Mr. Scott-Moncrieff links up the peacefulness of the Border towns with the fact that there were no minerals to be greedily exploited; and while he admires the dovecots of Fife as a picturesque feature of the landscape, he also remembers that the pigeon was bred for feeding to cattle in winter in pre-turnip days. He can describe a mediaeval ruin in exact architectural terms, but he usually finds it more to the point to inquire, for in- stance, why the excellent native building tradition should have been all but lost in modern Scotland. The decay of the village, the idol of Efficiency, the effects of the social services, are among the subjects discussed by the way, from the standpoint of a revolutionary traditionalism. Mr. Scott- Moncrieff sees the need for a great number of drastic changes, but he would have things changed in the direction of the small, organic community based firmly on the natural values of the land and the people, than of the big, centralised unit, dependent for its prosperity on the movement of man and markets beyond its borders.

Finally, those who like a plain guide and no nonsense (dis- tances, populations, "Hotel, R. & B. 8s. 6d.," &c.) are advised to take Muirhead's Blue Guide (Berm, 12s. 6d.), which has a good series of maps at the back. Less orthodox, but equally practical, is the Shell Guide to the West Coast (Batsford, 2S. 6d.)—a mixture of topography, history, folklore and common sense, flavoured by the strong social conscience of the compiler, Stephen Bone. It covers the country from Skye to Oban; and it is to be hoped it will soon be supplemented by others, for the stranger could wish for no more intelligent