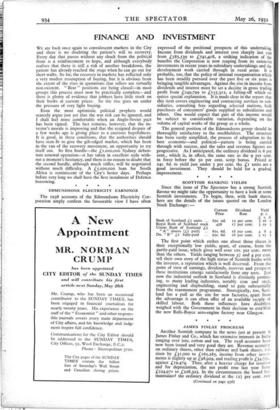 The 1938 accounts of the Edmundsons Electricity Cor- poration amply confirm the favourable view I have often expressed of the positional prospects of this undertaking. Income from dividends and interest rose sharply last year from £585,539 to £741,418, a striking indication of the benefits the Corporation is now reaping from its extensive investments in recent years in subsidiary undertakings and the development work carried through in rural areas. It is probable, too, that the policy of internal reorganisation which has been steadily pursued over the past five or six years is bringing tangible advantages. Against the rise in income from dividends and interest must be set a decline in gross trading profit from £249,799 to £155,312, a falling-off which re- quires special explanation. It is made clear in the report that this item covers engineering and contracting services to sub- sidiaries, consulting fees regarding selected stations, bulk purchases of consumers' goods supplied to subsidiaries and others. One would expect that part of this income would be subject to considerable variation, depending on the volume of capital works of the group as a whole.

The general position of the Edmundsons group should be thoroughly satisfactory to the stockholders. The structure has been vastly simplified, the process of adaptation to the best economic—and political—pattern is being carried through with success, and the sales and revenue figures are progressive. As I anticipated, the ordinary dividend is 6 per cent., which is, in effect, the same rate as the 9 per cent. in force before the 50 per cent. scrip bonus. Priced at 24s. 6d. to yield just under 5 per cent. the Li units are a good investment. They should be held for a gradual improvement.