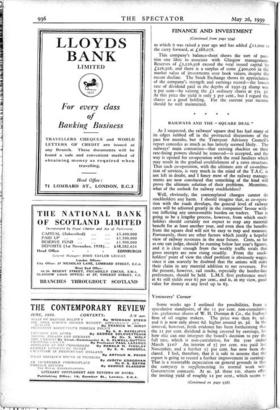 RAILWAYS AND THE "SQUARE DEAL" As I suspected, the railways'

square deal has had many ot its edges rubbed off in the protracted discussions of the past few months, but the Transport Advisory Council's report concedes as much as has latterly seemed likely. The railways' main contention—that existing shackles on their rate-fixing powers should be removed—is accepted, and the way is opened for co-operation with the road hauliers which may result in the gradual establishment of a rates structure. That such co-operation, with the ultimate aim of co-ordina- tion of services, is very much in the mind of the T.A.C. is not left in doubt, and I fancy most of the railway manage- ments are now convinced that something of the kind will prove the ultimate solution of their problems. Meantime, what of the outlook for railway stockholders?

Well, obviously, the contemplated changes cannot do stockholders any harm. I should imagine that, as co-opera- tion with the roads develops, the general level of railway rates will be adjusted greatly in the companies' favour with- out inflicting any unreasonable burden on traders. That is going to be a lengthy process, however, from which stock- holders should certainly not expect to reap any material benefit for at least another year, and even then the benefits from the square deal will not be easy to trap and measure. Fortunately, there are other factors which justify a hopeful view of railway revenues in the near future. Costs, so far as one can judge, should be running below last year's figures, and it is clear enough from the weekly traffic totals that gross receipts are now rising steadily. From the stock- holders' point of view the chief problem is obviously wages, since it can scarcely be doubted that the unions will stake their claim in any material addition to net revenues. For the present, however, rail stocks, especially the border-line preferences, should be held. L.M.S. first preference stock at 61 still yields over 61 per cent., and is, in my view, good value for money at any level up to 65.