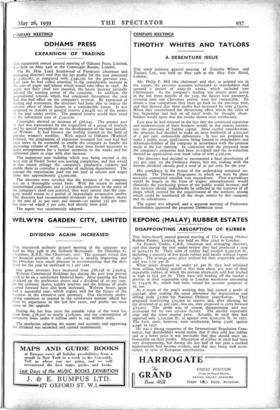 THE nineteenth ordinary general meeting of the company was held on May 24th at the Holborn Restaurant. Sir Theodore G. Chambers, K.B.E. (the Chairman), said : The accounts reveal that the financial position of the company is steadily improving, and the Directors have much pleasure in recommending that the divi- dend for the year be increased to 5 per cent.

Welwyn Commercial Buildings has during the past year proved iself to be on a satisfactory financial basis. After meeting the fixed dividend on the preference shares and a dividend of to per cent. on the ordinary shares, sundry reserves and the balance of profit carried forward have also been increased. Welwyn Stores again had a successful year, which augurs well for the future of the business in the extensive new premises. Our electricity under- taking continues to expand in the satisfactory manner which has been its experience in the last few years, and profits are once again on the upgrade.

The resolution adopting the report and accounts and approving the dividend was seconded and carried unanimously.