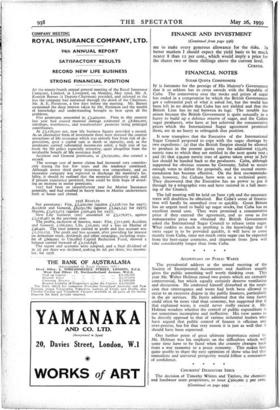 The presidential address at the annual meeting. of the Society of Incorporated Accountants - and Auditors usually gives the public something well worth thinking over. This year Mr. Walter Holman raised two points which are certainly controversial, but which equally certainly deserve ventilation and discussion. He confessed himself disturbed at the suspi- cion that extravagance and waste had both been allowed to occur to an excessive degree in the public finances, particularly in the air services. He freely admitted that the time factor could often be more vital than economy, but suggested that if that explained waste, it could never really excuse it. Mr. Holman wonders whether the control of public expenditure is not sometimes incomplete and ineffective. His view seems to be directly opposed to that of various industrial leaders who have argued that public control of finance is officious and over-precise, but for that very reason it is just as well that it should have been expressed.

One further point of great ultimate importance raised by Mr. Holman was his emphasis on the difficulties which will some time have to be faced when the country changes back from a war economy to a peace economy. This makes him quite unable to share the easy optimism of those who feel that immediate and universal prosperity would follow a restoration of confidence.