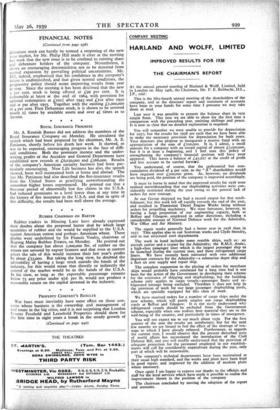 IMPROVED RESULTS FOR 1938 THE CHAIRMAN'S REPORT

This is the fifty-fourth annual meeting of the shareholders of the company, and as the directors' report and statement of accounts have been in your hands for some time I presume we may take them as read.

Last year it was possible to present the balance sheet in very simple form. This year we are able to show for the first time a comparison with the preceding year, omitting shillings and pence. It is now so clear that no detailed explanation is required.

You will remember we were unable to provide for depredation th for 1937; but e results for 1938 are such that We have able

to make the necessary provision for depreciation for both years. Your directors also propose to inaugurate a reserve fund with an appropriation of the sum of £too,000. It is, I admit, a small amount for a company with an issued capital of almost £7,000,000, but it is at least a beginning, and I feel sure this policy of strengthening the company's financial position will have your approval. 'This leaves a balance of £45,227 at the credit of profit and loss account to be carried forward.

You understand, of course, that the preferential but non- cumulative dividend of 4 per cent, to the " A " shareholders would have required over £2cio,000 gross. As, however, no dividends are being paid, the position of the company is improved accordingly.

It must be borne in mind that the improved results for 1938 were realised notwithstanding that our shipbuilding activities were con- siderably restricted during the year owing to the general lack of orders for new tonnage.

At our Govan shipyard we had a record output for that estab- lishment, but this work fell off rapidly towards the end of the year, and resulted in Finnieston Diesel Engine Works being without orders for propelling machinery. We were fortunate, however, in having a large proportion of our engineering capaciy, both at Belfast and Glasgow, employed in other directions, including a considerable amount of National Defence work for the Admiralty, War Office and Air Ministry.

The repair works generally had a better year in 1938 than in 1937. This applies also to our Scotstoun works and Clyde foundry, and to our structural steel departments

The work in hand includes some notable ships, such as: an aircraft carrier and a cruiser for the Admiralty; the R.M.S. Andes, a high-class passenger liner which is the largest passenger ship to be launched during the current year, and three refrigerated cargo liners. We have recently been entrusted with two additional important contracts for the Admiralty—a submarine depot ship and a fleet air arm supply and repair ship.

The complete suspension in the placing of orders for merchant ships would probably have continued for a long time had it not been for the action of the Government in developing their scheme for the assistance of shipping and shipbuilding; but the building scheme only applies to cargo vessels—passenger liners and re- frigerated tonnage being excluded. Therefore it does not help in the provision of work for our large passenger shipbuilding yards, which are specially equipped for this class of work.

We have received orders for a number of cargo ships under the new scheme, which will partly employ our cargo shipbuilding yards at Belfast and Glasgow. It is not easily understood why refrigerated vessels should be excluded from the Government scheme, especially when one realises how essential they are to the well-being of the country, and particularly in times of emergency.

You will not expect me to say much about 3939. For the first quarter of the year the results are satisfactory; but for the next few months we are bound to feel the effect of the shortage of ton- nage to which I have already referred. Furthermore, as regards the current year, I would observe that the present disturbed state of world affairs has necessitated the introduction of the Civil Defence Bill, and you will readily understand that the provision of adequate protection for the personnel employed in our establish- ments will call for considerable expenditure during the year, only part of which will be recoverable.

The company's technical departments have been maintained at their usual high standard, and the works and plant have been kept in good repair, and improved by the addition of modem plant where necessary.

Once again I am happy to express our thanks to the officials and staff for the loyal services which have made it possible to realise the improvement shown in the position of the company The chairman concluded by moving the adoption of the report and accounts.