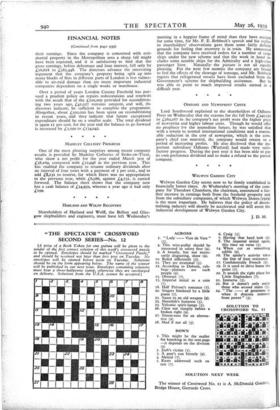 Shareholders of Harland and Wolff, the Belfast and Glas- gow shipbuilders and engineers, must have left Wednesday's

meeting in a happier frame of mind than they have enjoyed for some time, for Mr. F. E..Rebbeck's speech and his replies to shareholders' observations gave them some fairly definite grounds for feeling that recovery is in train. He announced that the company have received orders for a number of cargo ships under the new scheme and that the work in hand in. cludes some notable ships for the Admiralty and a high-class passenger liner. Naturally, the picture is not all equally pleasing. For the next few months the company are bound to feel the effects of the shortage of tonnage, and Mr. Rebbeek regrets that refrigerated vessels have been excluded from the Government's scheme for shipbuilding assistance. But he was able to point to much improved results earned in a difficult year.