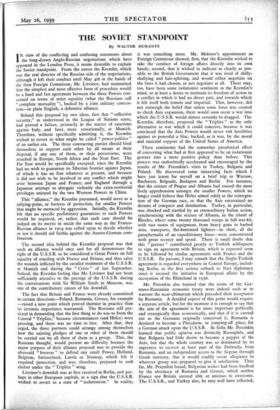 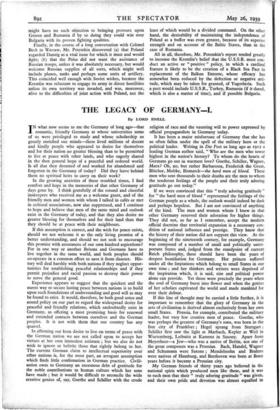 IN view of the conflicting and confusing statements about the long-drawn Anglo-Russian negotiations which have appeared in the London Press, it seems desirable to explain the Soviet standpoint. From the outset the Kremlin, which was the real director of the Russian side of the negotiations, although it left their conduct until May 4th in the hands of the then Foreign Commissar, Mr. Litvinov, had maintained that the simplest and most effective form of procedure would be a hard and fast agreement between the three Powers con- cerned on terms of strict equality (what the Russians call "complete mutuality "), backed by a joint military conven- tion—in plain English, a defensive alliance.

Behind this proposal lay two ideas, first that "collective security," as understood in the League of Nations sense, had proved a failure, primarily in the matter of sanctions against Italy, and later, more sensationally, at Munich. Therefore, without specifically admitting it, the Kremlin wished to revert to what might be called " power-politics " of an earlier- era. The three contracting parties should bind themselves to support each other by all means at their disposal, if any one of them, or their possessions, were attacked in Europe, North Africa and the Near East. The Far East would be specifically excepted, since the Kremlin had no wish to guarantee its Siberian frontier against Japan, of which it has no fear whatever at present, and because it did not wish to be involved in any conflict which might arise between Japan and France, and England through a Japanese attempt to abrogate violently the extra-territorial privileges enjoyed by the two Western Powers in China.

This "alliance," the Kremlin presumed, would serve as a rallying-point, or fortress of protection, for smaller Powers that might be menaced by aggression. Initially, the Kremlin felt that no specific preliminary guarantees to such Powers would be required, or, rather, that each case should be judged on its merits in much the same way as the Franco- Russian alliance in 1914 was called upon to decide whether or not it should aid Serbia against the Austro-German com- bination.

The second idea behind the Kremlin proposal was that such an alliance would once and for all demonstrate the right of the U.S.S.R. to be considered a Great Power on full equality of standing with France and Britain, and thus salve the wounds inflicted by the cavalier treatment of the U.S.S.R. at Munich and during the " Crisis" of last September. Indeed, the Kremlin feeling that Mr. Litvinov had not been sufficiently attentive to the prestige of the U.S.S.R. during the conversations with Sir William Seeds in Moscow, was one of the contributory causes of his downfall.

The fact that Britain and France were already committed in certain directions—Poland, Rumania, Greece, for example —raised a new point which proved thornier in practice than its intrinsic importance warranted. The Russians still per- sisted in demanding that the first thing to do was to form the Central " Triplice," because circumstances (and Hitler) were pressing, and there was no time to lose. After that, they urged, the three partners could arrange among themselves how the existing pledges of one or other of them should be carried out by all three of them as a group. This, the Russians thought, would present no difficulty because the major purpose of their alliance proposal was to provide the aforesaid " fortress " to defend any small Power, Holland, Belgium, Switzerland, Latvia or Norway, which felt it required protection, and was, therefore, prepared to seek shelter under the " Triplice " wing.

Litvinov's downfall was at first received in Berlin, and per- haps in other European capitals, as a sign that the U.S.S.R. wished to revert to a state of "isolationism." In reality, it was something more. Mr. Molotov's appointment as Foreign Commissar showed, first, that the Kremlin wished to take the conduct of foreign affairs directly into its own hands; second, that it wished to indicate as clearly as pos- sible to the British Government that it was tired of shilly- shallying and hair-splitting, and would either negotiate on the lines it had chosen, or not negotiate at all. There may, too, have been some isolationist sentiment in the Kremlin's mind, or at least a desire to maintain its freedom of action in a conflict in which it had no direct part, and towards which it felt itself both remote and impartial. That, however, did not outweigh the belief that unless some force was created to check Axis expansion, there would soon occur a war into which the U.S.S.R. would almost certainly be dragged. The Kremlin, therefore, proposed the " Triplice " as the only alternative to war which it could conceive, because it was convinced that the Axis Powers would never risk hostilities against so powerful a bloc, backed, as it was, by the moral and material support of the United States of America.

These sentiments had the somewhat paradoxical effect of converting what had at first appeared to be an isolationist gesture into a more positive policy than before. This process was undoubtedly accelerated and encouraged by the results of Mr. Potemkin's visits to Turkey, Bulgaria and Poland. He discovered some interesting facts which I have just learnt for myself on a brief trip to Warsaw, Bucharest, Belgrade, Budapest and Berlin. For instance, that the seizure of Prague and Albania had roused the most lively apprehension amongst the smaller Powers, which no longer could believe that Hitler aimed solely at the reintegra- tion of the German race, or that the Axis entertained no dreams of conquest and domination. Turkey, in particular, was shocked and startled by an extraordinary Italian action, synchronising with the seizure of Albania, in the island of Rhodes, where some twenty thousand troops in full war-kit, with vast stores of equipment, from heavy guns to barbed wire, transports, flat-bottomed lighters—in short, all the paraphernalia of an expeditionary force—were concentrated with great secrecy and speed. There is small doubt that this " gesture " contributed greatly to Turkish willingness to sign an agreement with Britain, which is expected soon to be followed by similar agreements with France and the U.S.S.R. En passant, I may remark that the Anglo-Turkish agreement is regarded everywhere in Central Europe, includ- ing Berlin, as the first serious setback to Nazi diplomacy since it secured the initiative in European affairs by the occupation of the Rhineland in 1936.

Mr. Potemkin also learned that the terms of the Ger- mano-Rumanian economic treaty were indeed such as to warrant the near-ultimatum which preceded their acceptance by Rumania. A detailed exposo of this point would require a separate article, but for the moment it is enough to say that the aim of the agreement is far more important politically and strategically than economically, and that if it is carried out as the Germans originally conceived it, Rumania is destined to become a Platzdarm, or jumping-off place, for a German attack upon the U.S.S.R. In Sofia Mr. Potemkin learned that public opinion was distinctly Russophile, and that Bulgaria had little desire to become a puppet of the Axis, but that the whole country was so dominated by its eagerness to recover at least part of the Dobrudja from Rumania, and an independent access to the Aegean through Greek territory, that it would readily swear allegiance to whatever group was prepared to give it satisfaction. Thus far, Mr. Potemkin found, Bulgarian wishes had been baulked by the obstinacy of Rumania and Greece, which neither France nor Britain seemed able or anxious to overcome. The U.S.S.R., and Turkey also, he may well have reflected, might have no such objection to bringing pressure upon Greece and Rumania if by so doing they could win over Bulgaria with its proven fighting qualities.

Finally, in the course of a long conversation with Colonel Beck in Warsaw, Mr. Potemkin discovered (a) that Poland regarded Danzig as a vital issue for which it must and would fight; (b) that the Poles did not want the assistance of Russian troops, unless it was absolutely necessary, but would welcome Russian supplies of all sorts, which might well include planes, tanks and perhaps some units of artillery. This coincided well enough with Soviet wishes, because the Kremlin was reluctant to engage its army in direct hostilities unless its own territory was invaded, and was, moreover, alive to the difficulties of joint action with Poland, not the least of which would be a divided command. On the other hand, the desirability of maintaining the independence of Poland as a buffer was even greater, because of its superior strength and on account of the Baltic States, than in the case of Rumania.

All in all, therefore, Mr. Potemkin's report tended greatly to increase the Kremlin's belief that the U.S.S.R. must con- duct an active or " positive " policy, in which a cardinal feature is likely to be the creation of a Black Sea Pact in replacement of the Balkan Entente, whose efficacy has somewhat been reduced by the defection or negative atti- tude, which may be taken for granted, of Yugoslavia. Such a pact would include U.S.S.R., Turkey, Rumania (if it dared, which is also a matter of time), and if possible Bulgaria.