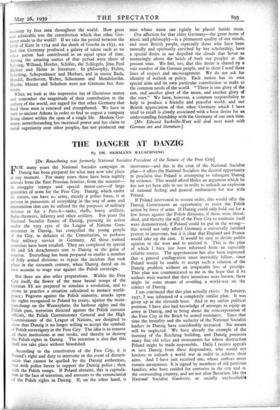 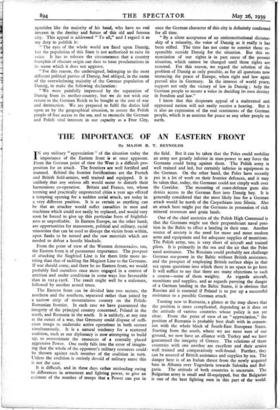 THE DANGER AT DANZIG

[Dr. Rauschning was formerly National Socialist President of the Senate of the Free City] FOR many years the National Socialist campaign in Danzig has been prepared for what may now take place at any moment. For many years there have been nightly arrivals from the East Prussian frontier, from the seacoast— in smuggler tramps and special motor-cars--of large quantities of arms for the Free City. Danzig, which under its statute, can have no army, merely a police force, is at present in possession of everything in the way of arms and ammunition that can be utilised for the purposes of military defence or for a Putsch—tanks, shells, heavy artillery, flame-throwers, infantry and other artillery. For years the National Socialist Senate of Danzig, pursuing its action under the very eyes of the League of Nations Com- missioner in Danzig, has compelled the young people of the City, in defiance of the Constitution, to perform their military service in Germany All those trained reservists have been recalled. They are completed by special SS and SA detachments sent to Danzig in the guise of tourists. Everything has been prepared to enable a number of fully armed divisions to repeat the incident that took place in the sixteenth century, when Danzig dared on its own account to wage war against the Polish sovereign.

But there are also other preparations. Within the Free City itself, the flower of the most brutal troops of the German SS are prepared to simulate a revolution, and to create in practice a situation calculated to menace world- peace ; Pogroms against the Polish minority, attacks upon the rights recognised to Poland by treaty, against the muni- non-dump on the Westerplatte, the harbour rights and the Polish post, terrorism directed against the Polish customs officials, the Polish Commissioner General and the High Commissioner of the League of Nations, are designed to show that Danzig is no longer willing to accept the symbols of Polish sovereignty in the Free City. The idea is to remove all these institutions at one stroke, and thereby to destroy the Polish rights in Danzig. The intention is also that this shall not take place without bloodshed.

According to the constitution of the Free City, it is Poland's right and duty to intervene in the event of disturb- nces that cannot be quelled by the Danzig authorities, rst with police forces to support the Danzig police ; then with the Polish troops. If Poland abstains, this is capitula- tion in the face of terrorism, and amounts to the renunciation of the Polish rights in Danzig. If, on the other hand, it intervenes—and this is the crux of the National Socialist plan—it offers the National Socialists the desired opportunity to proclaim that Poland is attempting to subjugate Danzig by violence. This would afford Hitler an argument which he has not yet been able to use in order to unleash an explosion of national feeling and general enthusiasm for war with Poland.

If Poland intervened to restore order, this would offer the Danzig Government an opportunity to resist the Polish action by force of arms. If Danzig could only hold out for a few hours against the Polish divisions, if there were blood- shed, and thereby the will of the Free City to maintain itself were demonstrated, if Poland could be put in the wrong— this would not only afford Germany a universally justified pretext to intervene, but it is clear that England and France would take up the case. It would be easy to divide public opinion in the west and to mislead it. This is the plan of which I have just been informed from an especially reliable source. The apprehension has also been expressed that a general conflagration must inevitably follow, since Poland would be unable to accept such a solution of the Danzig problem without an irreparable loss of prestige. This plan was communicated to me in the hope that if its authors were warned that their intentions were known, there might be some means of avoiding a world-war on the subject of Danzig.

I am convinced that this plan actually exists. In January, 1937, I was informed of a completely similar plan. It was given up at the eleventh hour. And in my earlier political position, I have also had knowledge of attempts to equip an army in Danzig, and to bring about the reincorporation of the Free City in the Reich by armed resistance. Since that time the brutality and the audacity of the National Socialist leaders in Danzig have considerably increased. No means will be neglected. We have already the example of the burning of the Reichstag building, and Danzig possesses many fine old relics and monuments for whose destruction Poland might be made responsible. Daily I receive appeals to save Danzig from these desperadoes, who would not hesitate to unleash a world war in order to achieve their aims. And I have just received one, whose authors must remain anonymous. It is signed by members of old patrician families, who have resided for centuries in the city and in the surrounding country, and are not alien Bavarians like the National Socialist Gauleiter, or socially unclassifiable apatrides like the majority of his band, who have no real interest in the destiny and future of this old and famous city. This appeal is addressed "To all," and I regard it as my duty to publish it: "The eyes of the whole world are fixed upon Danzig, but the population of this State is not authorised to raise its voice. It has to tolerate the circumstance that a country bumpkin of obscure origin can dare to issue proclamations in its name which it does not approve.

"For this reason, the undersigned, belonging to the most different political parties of Danzig, feel obliged, in the name of the overwhelming majority of the German population of Danzig, to make the following declaration: "We were painfully impressed by the separation of Danzig from its mother-country, but we do not wish our return to the German Reich to be bought at the cost of war and destruction. We are prepared to fulfil the duties laid upon us by the geographical situation, to assure the Polish people of free access to the sea, and to reconcile the German and Polish vital interests in our capacity as a Free City, once the German character of this city is definitely confirmed for all time.

"By a silent acceptance of an anticonstitutional dictator- ship of a minority, the voice of Danzig as it really is has been stifled. The time has not come to convict those re- sponsible outside Danzig for the situation. But this re- nunciation of our rights is in part cause of the present situation, which cannot be changed until these rights are restored. For this reason, we regard the solution of the problem of Danzig as only possible, as for all questions now menacing the peace of Europe, when right and law again prevail also in Germany. In the interest of world peace, support not only the victory of law in Danzig ; help the German people to secure a voice in deciding its own destiny in freedom and law."

I know that this desperate appeal of a maltreated and oppressed nation will not easily receive a hearing. But it is also an expression of the real sentiments of the German people, which is as anxious for peace as any other people on earth.