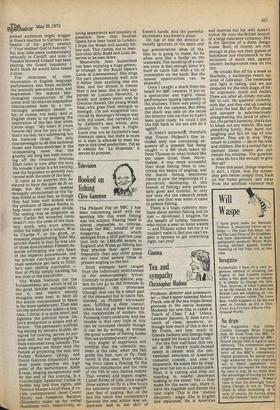 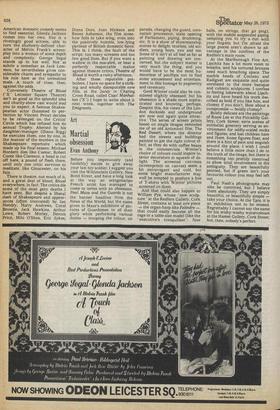 Producer, director and screenwriter — that's super-talented Melvin Frank, one of the few triple-threat geniuses in the movie business. Modestly his new film is called A Touch of Class (' AA' Odeon, Leicester Square). It does have a touch of class, moreover, although how much of this is due to Mr Frank, and how much to Glenda Jackson and George Segal who speak his lines,is hard to tell.

For the first half-hour this vessel of Mr Frank's multi-faceted talent is awash with the conventional solecisms of American romantic comedy, and near to shipwreck. He meets Her by tripping over her son in a London park. Next, it is raining and they are standing in nearby doorways looking at the street. Yes — they make for the same taxi, share it, have tea together and dinner the next night. This is the 'mutual discovery' stage. She is English and separated; He is American and married but his wife doesn't notice. He runs the British branch of a large insurance company; She is the director of a dress design house. Both, of course, are rich enough to play out their games of battledore and shuttlecock to the exclusion of much else, against opulent backgrounds easy on the eye.

He whisks Her off for a week to Marbella, a loathsome resort upwind of Gibraltar. The sweetness and light is fading, and we are prepared for the next stage, of bitter argument, insult and dislike. There are, after all, ninety minutes left to run. He quarrels violently with Her, and they end up tussling all over the bed. But all this abuse and sarcasm is subconsciously strengthening the bond of affection, the perfect harmony, that's due to break out any minute. She says something funny; they burst out laughing and fall on top of one another. They are in love. They return to London — He to his wife and children. She to a rented flat in Gerrard Street where she can remain his mistress. The question is: does He love Her enough to give Her up?

From this point, things improve. It isn't, I think, that the screenplay gets better: simply that, back on her home ground, and away from the artificial violence that

American domestic comedy seems to find essential, Glenda Jackson comes into her own. She is a rivetingly good actress, able to turn the shallowly-defined character of Melvin Frank's screenplay into a woman of some depth and complexity. George Segal stands up to her well. Not as subtle a comedian as Jack Lemmon, he nevertheless gives considerable charm and sympathy to his role here as the tormented male. A touch of class, then, against the odds.

Conversely Theatre of Blood ('X ' Leicester Square Theatre) isn't as good as the splendid idea and charity-show cast would lead you to expect. A famous Shakespearian actor (hammed to perfection by Vincent Price) decides to be revenged on the Critics' Circle which has refused him its annual Trophy. Abetted by his daughter/manager (Diana Rigg) he executes them, one by one, in the manner of the murders in the Shakespeare repertoire which made up his final season. Michael Hordern dies like Caesar, Robert Coote like Clarence, a head is cut off here, a pound of flesh there, until only one critic survives to meditate, like Gloucester, on his fate.

There is theatre, not much of it, and a great deal of blood. Blood everywhere, in fact, The critics die some of the most gory deaths I have seen. But despite a liberal dash of Shakespeare and appearances (often truncated) by Ian Hendry, Harry Andrews, Coral Browne, Jack Hawkins, Arthur Lowe, Robert Morley, Dennis Price, Milo O'Shea, Eric Sykes, Diana Dors, Joan Hickson and Renee Asherson, the film somehow fails to take wing, even into the positively humble, low-lying purlieus of British domestic farce. This is, I think, the fault of the script: too many screams and too few good lines. But if you want a wallow in the macabre, or bear a perfectly respectable malice against theatre critics, Theatre of Blood is worth a rainy afternoon.

After these reputable potboilers, I have no space for a striking and wholly disreputable new film, at the Jacey in Charing Cross Road, called Ciao! Manhattan ('X ') I hope to write about it next week, together with The ' Emigrants.