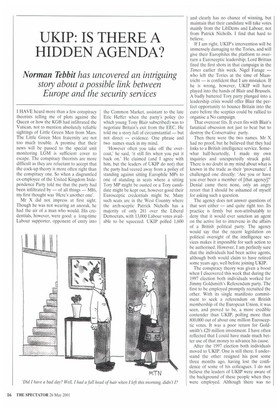 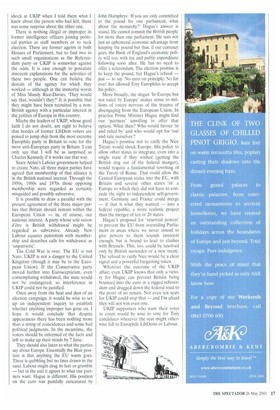 UKIP: IS THERE A HIDDEN AGENDA?

Norman Tebbit has uncovered an intriguing

story about a possible link between Europe and the security services

I HAVE heard more than a few conspiracy theorists telling me of plots against the Queen or how the KGB had infiltrated the Vatican, not to mention absolutely reliable sightings of Little Green Men from Mars. The Little Green Men fraternity are not too much trouble. A promise that their news will be passed to the special unit monitoring LGM is sufficient cover to escape. The conspiracy theorists are more difficult as they are reluctant to accept that the cock-up theory is more often right than the conspiracy one. So when a disgruntled ex-employee of the United Kingdom Independence Party told me that the party had been infiltrated by — of all things — MI6, my first thought was 'Here's another one'.

Mr X did not impress at first sight. Though he was not wearing an anorak, he had the air of a man who would. His credentials, however, were good: a long-time Labour supporter, opponent of entry into the Common Market, assistant to the late Eric Heffer when the party's policy (to which young Tony Blair subscribed) was to negotiate Britain's exit from the EEC. He told me a story full of circumstantial — but not direct — evidence. One phrase and two names stuck in my mind.

'However often you take off the overcoat,' he said, 'it still fits when you put it back on.' He claimed (and I agree with him, but the leaders of UKIP do not) that the party had veered away from a policy of standing against sitting Europhile MPs to one of standing in seats where a sitting Tory MP might be ousted or a Tory candidate might be kept out, however good their Eurosceptic credentials might be. Many such seats are in the West Country where the arch-sceptic Patrick Nicholls has a majority of only 281 over the Liberal Democrats, with 13,000 Labour votes available to be squeezed. UKIP polled 1,600 and clearly has no chance of winning, but maintain that their candidate will take votes mainly from the LibDems and Labour, not from Patrick Nicholls. I find that hard to believe.

If I am right, UKIP's intervention will be immensely damaging to the Tories, and will give their Europhiles the platform to overturn a Eurosceptic leadership; Lord Brittan fired the first shots in that campaign in the Times earlier this week. Nigel Farage — who left the Tories at the time of Maastricht — is confident that I am mistaken. If he is wrong, however. UKIP will have played into the hands of Blair and Brussels. A badly battered Tory party plunged into a leadership crisis would offer Blair the perfect opportunity to bounce Britain into the euro before the sceptics could be rallied to organise a No campaign.

That overcoat fits. It even fits with Blair's fanatical obsession not just to beat but to destroy the Conservative party.

Then there were the two names. Mr X had no proof, but he believed that they had links to a British intelligence service. Somewhat half-heartedly, I made my own inquiries and unexpectedly struck gold. There is no doubt in my mind about what is known in the trade as their 'provenance'. I challenged one directly: 'Are you or have you ever been a member of [that agency]?' Denial came there none, only an angry retort that I should be ashamed of myself for asking such a question.

The agency does not answer questions of that sort either — and quite right too. Its practice is firmly but non-attributably to deny that it would ever sanction an agent on the active list to intervene in the affairs of a British political party. The agency would say that the recent legislation on political oversight of the intelligence services makes it impossible for such action to be authorised. However, I am perfectly sure that the individuals had been active agents, although both would claim to have retired some years ago, well before joining UKIP.

The conspiracy theory was given a boost when I discovered this week that during the 1997 election both individuals worked for Jimmy Goldsmith's Referendum party. The first to be employed promptly recruited the other. With its single manifesto commitment to seek a referendum on British membership of the European Union, it was seen, and proved to be, a more credible contender than UKIP, polling more than 800,000 out of about one million Eurosceptic votes. It was a poor return for Goldsmith's £20 million investment. I have often reflected that I could have made much better use of that money to advance his cause.

After the 1997 election both individuals moved to UKIP. One is still there. I understand the other resigned his post some three months ago, having lost the confidence of some of his colleagues. I do not believe the leaders of UKIP were aware of the background of these people when they were employed. Although there was no shock at UKIP when I told them what I knew about the person who had left, there was some surprise about the other one.

There is nothing illegal or improper in former intelligence officers joining political parties as staff members or to seek election. There are former agents in both Houses of Parliament, but to find two in such small organisations as the Referendum party or UKIP is somewhat against the odds. It is easy enough to postulate innocent explanations for the activities of these two people. One can believe the denials of the agency for which they worked — although in the immortal words of Miss Mandy Rice-Davies, 'They would say that, wouldn't they?' It is possible that they might have been recruited by a nonBritish agency with a particular interest in the politics of Europe in this country.

Maybe the leaders of UKIP, whose good faith I do not doubt, are right to believe that hordes of former LibDem voters are poised to jump ship from the most extreme Europhile party in Britain to vote for the most anti-European party in Britain. I can only say that I will be as surprised as Charles Kennedy if it works out that way.

Since Attlee's Labour government helped to create Nato, all three major parties have agreed that membership of that alliance is in the British national interest. Through the 1950s, 1960s and 1970s those opposing membership were regarded as certainly misguided and possibly subversive.

It is possible to draw a parallel with the present agreement of the three major parties that Britain should remain within the European Union — in, of course, our national interest. A party whose sole raison d'etre is British withdrawal might be regarded as subversive. Already New Labour equates patriotism with membership and describes calls for withdrawal as 'unpatriotic'.

The Cold War is over, The EU is not Nato. UKIP is not a danger to the United Kingdom (though it may be to the European Union). If the Conservative party moved further into Euroscepticism, even contemplating withdrawal, the state would not be endangered, so interference in UKIP could not be justified.

Once away from the heat and dust of an election campaign, it would be wise to set up an independent inquiry to establish whether anything improper has gone on. I hope it would conclude that despite appearances there has been nothing more than a string of coincidences and some bad political judgments. In the meantime, the voters should be informed of the facts and left to make up their minds by 7 June.

They should also listen to what the parties say about Europe. Essentially the Blair position is that anything the EU wants goes. There is quibbling but no lines drawn in the sand. Labour might drag its feet or grumble — but in the end it agrees to what our partners want. Hague is different. His position on the euro was painfully caricatured by John Humpluys: 'If you are only committed to the pound for one parliament, what about the monarchy?' Hague's answer is sound. He cannot commit the British people for more than one parliament. He sees not just an ephemeral economic advantage from keeping the pound but that, if our currency goes, the Bank of England's economic policy will too, with tax and public expenditure following soon after. He has no need to offer a referendum. The election promise is to keep the pound, but Hague's refusal — just — to say 'No euro on principle; No for ever' has allowed Tory Europhiles to accept his policy.

More broadly, the slogan 'In Europe but not ruled by Europe' makes sense to millions of voters nervous of the trauma of disengaging from the European Union. In practice Prime Minister Hague might find our 'partners' unwilling to offer that option. What then? Who would favour 'in and ruled by' and who would opt for 'out and rule ourselves'?

Hague's promise not to ratify the Nice Treaty would shock Europe. His policy to allow other states to integrate, even into a single state if they wished (getting the British dog out of the federal manger), would require a fundamental rewriting of the Treaty of Rome. That could allow the Central European states into the EU, with Britain and several other states 'in' a Europe to which they did not have to concede the right to independent self-government. Germany and France could merge — if that is what they wanted — into a federal republic, a more realistic project than the merger of ten or 20 states.

Hague's proposal for 'reserved powers' to prevent the EU from overriding Parliament in areas where we never intend to give powers to them sounds innocent enough, but is bound to lead to clashes with Brussels. This, too, could be resolved only by British surrender or a new treaty. The refusal to ratify Nice would be a clear signal and a powerful bargaining token.

Whatever the outcome of the UKIP affair, even UKIP knows that only a victory for Hague can prevent Britain being bounced into the euro in a rigged referendum and dragged down the federal road to the point of no return. Not even ten seats for UKIP could stop that — and I'm afraid they will not win even one.

UKIP supporters who want their votes to count would be wise to vote for Tory candidates wherever the seat might otherwise fall to Europhile LibDems or Labour.