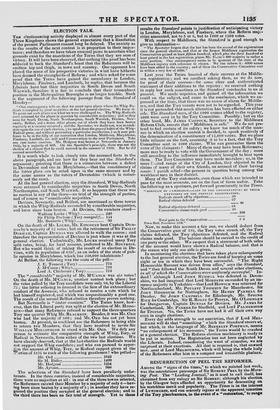 THE electioneering activity displayed in almost every part of the Three Kingdoms shows the general expectation that a dissolution of the present Parliament cannot long be delayed. The anxiety as to the results of the next contest is in proportion to their impor- tance • and therefore we have taken unusual pains to ascertain what grounds exist for the assertions of the Tories that they are sure of victory. It will have been observed, that nothing like proof has been adduced to back the Standard's boast that the Reformers will be smitten hip and thigh, in town and country. Our opponent has placed the scene of his prospective victories in what have hitherto been deemed the strongholds of Reform; and when asked for some proof that the Tories have gained the ascendancy in London, Marylebone, Finsbury, and Lambeth, he replies, that because the Liberals bare lost their majorities in South Devon and South Warwick, therefore it is fair to conclude that their triumphant position in the Metropolitan Boroughs is no longer tenable. Such is the argument of the following passage from the Standard of Monday- " Our contemporary tells us, that we count upon places where the Whig-Ra- dicals ttiumphed by great majorities at the last general election. We know it. To point out such places was what we were challenged to. The Whig-Radicals were returned for the places in question by considerable majorities ; and so they were for South Devon North Northampton, South Warwick, Devizes, New- castle, Belfast, and a dozen other places, out of which they have been beaten regularly as a vacancy occurred ; and the Spectator, we doubt not, was as confi- dent upon the eve of each election, (we speak from the general habit of the Whig. Radical press, and without pretending a particular recollection,) as it now pro- fesses to be in the folly of our conviction that London, Middlesex, Marylebone, Finsbury, Lambeth, 84c. will send Conservatives to the next Parliament. Take one case instar onatium. Mr. Hodgson wasj beaten at Newcastle in January 1835, by a majority of 800. On the Spectator's principle, there was not the shadow of a chance that he could succeed in the summer of 1836. But be did succeed nevertheless."

It is worth while to look closely into the assumed facts in the above paragraph, and see how far they bear out the Standard's argument ; granting that tbere is a connexion between a defeat in Devonshire and one in Marylebone,—that the constituency of the latter place can be acted upon in the same manner and by the same means as the voters of Devonshire (which is notori- ously not the case). At the last general election, says the Standard, Whig-Radicals were returned by considerable majorities in South Devon, North Northampton, and South Warwick. It so happens that there was no contest in any of the three—no trial of the strength of parties, and of course no "considerable majorities."

Devizes, Newcastle, and Belfast, are mentioned as three towns in which the Whig-Radicals succeeded by considerable majorities, and have since been beaten. At Devizes, the numbers stood- Wadham Locke ( Whig) 240 Sir Philip Durham (Tory mongrel)' 154 Mr. Bouverie (Whig) 90

On the death of Mr. LOCKE, Mr. ESTCOURT beat Captain Dew- DAS by'a majority of 12 votes; but on the retirement of Sir PHILIP DURHAM, Captain Dusmas was allowed to walk the course ; and therefore the representation of Devizes is just where it was at the general election. Undoubtedly, Mr. LOCKE received many Tory split votes, being, for local reasons, preferred to Mr. BOUVERIE. But who would think of taking the result of an election in De- vizes, with its population of 6367' as an index of the state of pub- lic opinion in Marylebone, which has '240,000 inhabitants ?

At Belfast, the following was the state of the poll—

Lord A. Chichester (Tory) 713 The "considerable" majority of Mr. M`Castex was six votes ! On the death of Mr. M`CANCE, another contest took place ; but the votes polled by the Tory candidate were only 80, by the Liberal 75; the latter refusing to proceed in the face of the extraordinary conduct of the Assessor, who refused to receive a vote which he had himself registered, and which was unquestionably a good one. The result of the second Belfast election therefore proves nothing. But Newcastle is "instar oninium." The Tories know, how- ever, that the Liberal party was split at the election of Mr. HonG- sox—that many Reformers refused to support the three-quarters Tory one quarter Whig Mr. Bnactlezr. Besides, it was Mr. ORD who had the majority of 800; and Mr. ORD has not yet been beaten. At present, so confident are the Reformers in being able to return two Members, that they have resolved to invite Sir WILLIAM MOLIESIVORTH to stand with Mr. ORD. We defy any person to estimate the comparative strength of Whig, Tory, or Radical in Newcastle, from either of the two last elections. We have already observed, that at the last election the Radicals would not, support the Whig candidate; and who can pretend to appor- ..kn the amount of Whir", Tory, or Radical support given at the .7.!ction of 1935 to each obi' the following gentlemen? who polled—

The selections of the Standard have been peculiarly unfor-

tunate. In the three counties, instead of considerable majorities, there were no majorities at all : in one of the three towns selected, the Reformers carried their Member by a majority of only 6—hav- ing been since beaten by a majority of 5; in another they have re- gained the position they occupied at the general election; and in the third there has been no fair trial of strength. Yet to these

results the Standard points in justification of anticipating victory in London, Marylebone, and Finsbury, where the Reform roajc. rities amounted, not to 5 or 6, but to 1000 or 1500 votes.

With respect to Middlesex, the Standard is good enough to give us information— The Spectator forgets that the last has been the second of the registrations since the general election, and that at the former Middlesex registration the Conservatives gained at least fifteen hundred, which plus the three hundred at least gained in the last registration, places Mr. Ine's 400 majority in rather • sorry position. Our contemporary seems to be igaorant of the state of the Middlesex registry with reference to claims. We can inform it : 6000 names have been added to the registry ; and of these the Conservative Committee sent in within a very few of 4000."

Last year the Tories boasted of their success at the Middle- sex registration ; and we recollect asking then, as we do now, for proof of their success—for some clear and authenticated statement of their additions to the registry : we received nothing in reply but such assertions as the Standard vouchsafes to us at present. We made inquiries, and gained all the information we could on the subject, and came to the conclusion, which we ex- pressed at the time, that there was no cause of alarm for Middle- sex, and that the Tory vaunts were not to be regarded. This year it is not pretended that much alteration has been effected on either side. The Standard says, of the 6000 names added to the registry, 9000 were sent in by the Tory Committee. Possibly; but on the other hand, Mr. JAMES COPPOCK, Secretary to the Middlesex Reform Club, asserts that "Middlesex is safe." We do not pre- tend to feel certain of its safety; we know too much of the man- ner in which an election contest is decided, to speak positively of the determination of a constituency of 12,000 voters. But we place little reliance on the fact, assuming it to be a fact, that the Tory Committee sent in 4000 claims. Who can guarantee them the votes of the claimants ? Many of them may have been Reformers; more may be ready to vote with the Government of the day ; more still according to the influence immediately brought to bear upon them. The Tory Committee may have made mistakes; as, in the more 11:aited range of the City of London, they objected to the claims of many of their own friends, on account of their having receivt I parish relief—the persons in question being among the wealthiest men in their district.

Many of the Tory statements, even those which are intended to pass for the most accurate, are on the face of them unfair. Take the following as a specimen, put forward prominently in the Times.

"BOROUGH OF CAMBRIDGE-GAIN TO THE CONSERVATIVES BY THEIR EXERTIONS ON THE PRESENT REGISTRATION.

Now, to make this account a fair one, we should deduct from the Conservative gain of 195, the Tory votes struck off, the Tory claims defeated, the Tory objections defeated, and the Radical claims made good. The balance should be carried to the credit of one party or the other. We suspect that a statement of both sides of the account would have shown a Radical balance, and that is

the reason why only one side is given. In mentioning the elections that have taken place subsequently

to the last general election, the Tories are fond of harping on some eight or ten in which they have been successful. "The Right Honourable Baronet was driven from office," says the Standard, and "then followed the South Devon and several other elections, in all of which the Conservatives were uniformly successful." In- deed ! although Lord JOHN RUSSELL was defeated in Devon- shire, we had imagined that Lord MORPETH succeeded by an im- mense majority in Yorkshire—that Lord Howicx was returned for Northumberland, Mr. PouLETr THOMSON for Manchester, Sir JOHN HOBHOUSE for Nottingham, Sir HENRY PARNELL for Dundee, Sir JOHN CAMPBELL for Edinburgh. Mr. SPRING RICE for Cambridge, Sir R. ROLFE for Penryn, Mr. Olourruzst for Dungarvon. Captain DUNDAS for Devizes, Mr. JAMES for Cumberland, Mr. PARKER for Sheffield, and Lord PauseasToat for Tiverton. No, the Tories have not had it all their own way

even in single elections. Every day adds strength to our conviction, that if Lord MEL-

BOURNE will do that "something" which the Standard sneers at, but which, in the language of Mr. BERKELEY PORTMAN, means "an enlargement of his measures," the Tories would be crushed at a general election. The Reform election machinery is ready to be put in motion. The Registration has not been neglected by the Liberals. Indeed, considering the want of stimulus, we are surprised at their exertions. All that is required is, that onward may,. nent of Lord MELBOURNE, which will bring the whole body of the Reformers after him in a compact and irresistible phalanx.