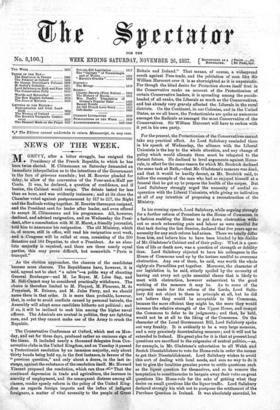 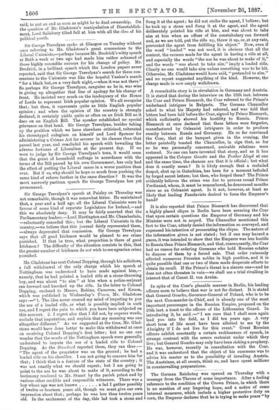 Page 1, 26 November 1887 — In his evening speech. Lord Salisbury, while arguing strongly for
Close

In his evening speech. Lord Salisbury, while arguing strongly for

a further reform of Procedure in the House of Commons, in a fashion enabling the House to put down obstruction with- out so much exhausting pain and labour as were needful for that task during the last Session, declared that five years ago no necessity for any such reform had arisen. There we totally differ from him, and believe him to have been blinded by his dislike of Mr. Gladstone's Cabinet and of their policy. What is a ques- tion of life or death now, was a question of strength or debility then. Lord Salisbury objected to have his colleagues in the House of Commons used up by the torture needful to overcome obstruction. Any one of them, he said, was worth the whole eighty-six Parnellites put together. Moreover, the character of our legislation is, he said, utterly spoiled by the necessity of leaving out every not quite essential clause that is likely to meet with obstruction, however subservient to the good working of the measure it may be. As to some of the proposals made for the reform of the Lords, Lord Salis- bury did not object to them in principle at all, but he did not believe they would be acceptable to the Commons, because the more efficient they might be, the more they would increase the relative strength of the Upper House, and compel the Commons to defer to its judgments ; and that, he held, would not be at all to the liking of the Commons. On the character of the Local Government Bill, Lord Salisbury spoke out very frankly. It is evidently to be a very large measure, and a very genuinely decentralising measure ; and it will not be extended to Ireland. His great plea for it is that at present local questions are sacrificed to the exigencies of central politics,—as, for example, in Mr. Gladstone's exhortation to all Welsh and Scotch Diseetablishers to vote for Home-rule in order the sooner to get their Disestabliehment. Lord Salisbury wishes to avoid this sort of dealing with local needs, and sees no way to do it but to give the localities genuine power to settle questions such as the liquor question for themselves, and so to remove the temptation to constituencies to bargain away their votes on great questions like Home-rule for the sake of getting what they desire on small questions like the liquor traffic. Lord Salisbury declared strongly his wish not to postpone the settlement of the Purchase Question in Ireland. It was absolutely essential, he said, to put an end as soon as might be to dual ownership. On the question of Mr. Gladstone's manipulation of Disestablish- ment, Lord Salisbury tilted full at him with all the élan of his political youth.