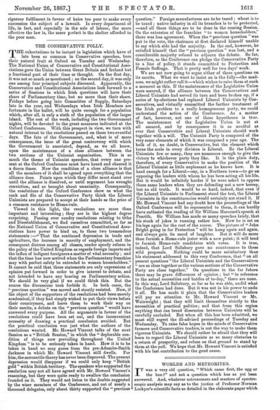 THE exhortations to be instant in legislation which have of late been so common in Conservative speeches, bore their natural fruit at Oxford on Tuesday and Wednesday. The National Union of Conservative and Constitutional Asso- ciations gave the Union between Great Britain and Ireland but a fractional part of their time or thought. On the first day, it was not so much as mentioned ; on the second day, it was only one among four principal subjects discussed. Apparently, the Conservative and Constitutional Associations look forward to a series of Sessions in which Irish questions will have their share of Parliamentary time, but no more than their share. Fridays before going into Committee of Supply, Saturdays late in the year, and Wednesdays when Irish Members are fortunate in the ballot, will be quite enough for a population which, after all, is only a sixth of the population of the larger island. The rest of the week, including the two Government nights, will be devoted to the great measures indicated at the Oxford Conference. With this prospect in view, we turn with natural interest to the resolutions passed on these two eventful days. The fate of the Government, and, what is of more consequence, the issue of the great controversy with which the Government is associated, depend, as we all know, upon the maintenance of a close alliance between the two sections of the Unionist organisation. This is so much the theme of Unionist speeches, that every one pre- sent at the Oxford Conference must have heard and cheered it a dozen times. Now the condition of a close alliance is that all the members of it shall be agreed upon everything that the

alliance does. Points upon which they differ must stand over until the alliance is dissolved, or until argument has wrought conviction, and so brought about unanimity. Consequently, the resolutions of the Oxford Conference show us what the rank and file of the Conservative Party think the Liberal Unionists are prepared to accept at their hands as the price of a common resistance to Home-rule.

Viewed in this light, the resolutions are more than important and interesting ; they are in the highest degree surprising. Passing over sundry resolutions relating to tithe and Disestablishment, we find ourselves committed, so far as the National Union of Conservative and Constitutional Asso- ciations have power to bind us, to these two tremendous statements That the continued depression in trade and agriculture, the increase in scarcity of employment, and the consequent distress among all classes, render speedy reform in the policy of the United Kingdom as regards foreign imports and the influx of indigent foreigners a matter of vital necessity ; and that the time has now arrived when the Parliamentary franchise may with perfect safety be extended to women householders." It cannot be said that these statements are only expressions of opinion put forward in order to give interest to debate, and not intended to have any bearing on Parliamentary action. We should be very glad if we could think this. But the coarse the discussions took forbids it. In both cases, the "previous question" was moved and stoutly resisted. Now, if the object of the supporters of the resolutions had been merely academical, if they bad simply wished to put their views before their countrymen, and leave them to work their way on their merits, a debate on the " previous question " would have answered every purpose. All the arguments in favour of the resolutions could have been set out, and the inconvenient necessity of drawing a practical conclusion avoided. But the practical conclusion was just what the authors of the resolutions wanted. Mr. Howard Vincent talks of the next Session as a "British Session," in which the "deplorable con- dition of things now prevailing throughout the United Kingdom " is to be seriously taken in hand. How it is to be taken in hand we may guess from the pre-Adamite-Smith darkness in which Mr. Howard Vincent still dwells. For him, the mercantile theory has never been disproved. The present depression would disappear if we could only keep "British gold " within British territory. The speakers who supported the resolution may not all have agreed with Mr. Howard Vincent's reasoning, but they were quite ready to swallow the conclusion founded on it. They would not listen to the doubts suggested by the wiser members of the Conference, and out of nearly a thousand delegates, only about thirty supported the " previous question." Foreign manufactures are to be taxed ; wheat is to be taxed ; native industry in all its branches is to be protected, —and all these things are to be done in the coming Session. On the extension of the franchise " to women householders," there was less agreement. When the " previous question " was put to the vote, the chairman at first declared himself unable to say which side had the majority. In the end, however, ho satisfied himself that the "previous question" was lost, and a considerable majority refused to adjourn the debate. So far, therefore, as the Conference can pledge the Conservative Party to a line of policy, it stands committed to Protection and Female Suffrage. That is pretty well for two days' work. We are not now going to argue either of these questions on its merits. What we want to insist on is the folly—the mad- ness, we might rather call it—which wishes to raise them at such a moment as this. If the maintenance of the Legislative Union were assured, if the alliance between the Conservatives and Liberal Unionists had served its turn and been broken up, if a series of by-elections had replaced Liberal Unionists by Con- servatives, and virtually committed the further treatment of the Irish problem to a really homogeneous party, we could understand the action of the Conference. As a matter of fact, however, not one of these hypotheses is true. The maintenance of the Legislative Union is not at all assured, and by consequence it is as needful as ever that Conservative and Liberal Unionists should work together with a will. The Unionist Party is composed of the very same elements of which it was composed a year ago. The

bulk of it, no doubt, is Conservative, but the element which turns the scale in every division is Liberal. Be the Liberal

Unionists few or many, they are numerous enough to give the victory to whichever party they like. It is the plain duty, therefore, of every Conservative to make the position of the Liberal Unionist as little unpleasant as he knows how. It is hard enough for a Liberal—say, in a Northern town—to go on opposing the leaders with whom he has been acting all his life.

But it would be infinitely harder if he were asked to oppose these same leaders when they are defending not a new heresy, but an old truth. It would be so hard, indeed, that even if the Liberal Unionists in Parliament stood the test, the Liberal Unionists in the constituencies would certainly not stand it. If Mr. Howard Vincent had any doubt how the proceedings of the Oxford Conference will be represented to them, it can hardly have outlasted the reading of Sir William Harconree speech at Penrith. Sir William has made so many speeches lately, that his stock of jokes is running rather low. Now he is set on his legs again for the rest of the recess. The picture of " John Bright going in for Protection " will be hung again and again, and always gain its meed of laughter. But it will do more than furnish a Home-rule jester with a new point; it will tend to furnish Home-rule candidates with votes. It is true, indeed, that Lord Salisbury gave no countenance to these wild proposals. Nothing could be more satisfactory than his statement addressed to this very Conference, that " on all present questions " the Liberal Unionists and the Conservatives " are as close together as the various sections of the Conservative Party are close together." On questions in the far future there may be grave differences of opinion ; but " in reference to the actual necessities and battles of to-day," there are none. In this way, Lord Salisbury, so far as he was able, undid what the Conference had done. But it was not in his power to undo it all. He has made it plain that the Conservative leaders will pay no attention to Mr. Howard Vincent or Mr. Wainwright ; that they will limit themselves strictly to the necessities of practical politics ; and that from this region anything that can breed dissension between Unionists will be carefully excluded. But when all this has been admitted, we must still regret the ill-advised proceedings of Tuesday and Wednesday. To raise false hopes in the minds of Conservative farmers and Conservative traders, is not the way to make them vigorous Unionists. We should rather be afraid that they will learn to regard the Liberal Unionists as so many obstacles to a return of prosperity, and refuse on that ground to stand by them at the poll. We hope that Mr. Howard Vincent is satisfied with his last contribution to the good cause.