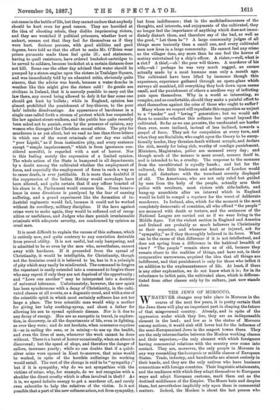 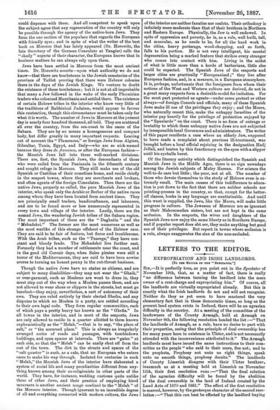 THE JEWS OF MOROCCO.

WHATEVER changes may take place in Morocco in the course of the next few years, it is pretty certain that the Jews there will play an important part in shaping the future of that misgoverned country. Already, and in spite of the oppression under which they live, they are an indispensable element in the land ; and low as is the statue of Morocco among nations, it would sink still lower but for the influence of the semi-Europeanised Jews in the seaport towns there. They are the only intermediaries between the Moslem working classes and their superiors,—the only element with which foreigners having commercial relations with the country ever come into contact. They are, moreover, the only people in Morocco in any way resembling the bourgeois or middle classes of European States. Trade, industry, and handicrafts are almost entirely in their hands, and they are the only natives who have business connections with foreign countries. Their linguistic attainments, and the readiness with which they adapt themselves to European ways and adopt European customs, mark them out as the destined middlemen of the Empire. The Moors hate and despise them, but nevertheless implicitly rely upon them in commercial matters. Indeed, the Moslem is about the last person who

could dispense with them. And all competent to speak upon the subject agree that any regeneration of the country will only be possible through the agency of the native-born Jews. They form the one section of the populace that regards the European with friendly eyes ; and in spite of what the writer of the beet book on Morocco that has lately appeared (Dr. Horowitz, the late Secretary of the German Consulate at Tangier) calls the "shady " aspects of their character, the European knows that in business matters he can always rely upon them.

Jews have been settled in Morocco from the most ancient times. Dr. Horowitz asserts—upon what authority we do not know—that there are tombstones in the Jewish cemeteries of the province of Tafilet proving that there were Hebrew colonies there in the days of the Jewish Kings. We venture to doubt the existence of these tombstones; but it is not at all improbable that many a Jew followed in the wake of the early Phoenician traders who colonised Mauritania and settled there. The existence of certain Hebrew tribes in the interior who know very little of the traditions of Rabbinical Judaism, would appear to favour this contention, though this circumstance must be taken only for what it is worth. The number of Jews in Morocco at the present day is nearly four hundred thousand, all told. They are scattered all over the country, from the sea-coast to the oases of the Sahara. They are by no means a homogeneous and compact body, but differ greatly in many important respects. Leaving out of account the " Flamencos," or foreign Jews from Algiers, Gibraltar, Tanis, Egypt, and Italy—who are so nick-named because they dress de flamenco, or after the European fashion— the Moorish Jews fall into three well-marked divisions. There are, first, the Spanish Jews, the descendants of those who were exiled from the Peninsula in the fifteenth century and sought refuge in Morocco. They still make use of the old Spanish or Castilian of their sometime home, and reside chiefly in the seaport towns, where they are merchants and brokers, and often agents of the foreign Consulates. Then there are the native Jews, properly so called, the pure Moorish Jews of the interior, who speak only the Arabic or Berber of the native races among whom they have been located from ancient times. They are principally small traders, handicraftsmen, and labourers, and are to be found more or lees numerously represented in every town and village of the interior. Lastly, there are the nomad Jews, the wandering Jewish tribes of the Sahara region. The most important of these are the " Daghatin " and the "Mehadshri." The former are the most numerous as well as the moat warlike of this strange offshoot of the Hebrew race. They are said to be fair of feature, but fierce and troublesome. With the Arab tribes, such as the "Tuaregs," they have con- stant and bloody fends. The Mehadshri live further east. Formerly they had a number of settlements near the coast, and in the good old Corsair days, when Sales pirates were still a terror of the Mediterranean, they are said to have been nowise averse to turning an honest penny in the cut-throat business.

Though the native Jews have no status as citizens, and are subject to many disabilities—they may not wear the " Ghaik," or over-garment, such as Moslems are wont to dress in, they must step out of the way when a Moslem passes them, and are not allowed to wear shoes or slippers in the streets, but must go barefoot—they enjoy, nevertheless, a sort of autonomy of their own. They are ruled entirely by their elected Sheiks, and any disputes to which no Moslem is a party, are settled according to their own legal code. They form regular communities, each of which pays a pretty heavy tax known as the " Ghefia," In all towns in the interior, and in moat of the seaports, Jews are only allowed to reside in a quarter allotted to them known euphemistically as the "Melah,"—that is to say, "the place of salt," or "the accursed place." This is always an irregularly arranged series of roads and passages, with tumbledown buildings, and open spaces at intervals. There are " gates " at each side, so that the " Melah " can be easily shut off from the rest of the town. The dirt in the streets and spaces of the "salt quarter" is such, as a rale, that no European who enters cares to make his way through. Isolated for centuries in such "Melah," the Moorish Jews of the interior have elaborated a system of social life and many peculiarities different from any- thing known among their co-religionista in other parts of the world. They have, for instance, wedding customs quite unlike those of other Jews, and their practice of employing hired mourners is another ancient usage confined to the "Melah " of the Morocco interior. Though ignorant to an incredible degree of all and everything connected with modern culture, the Jews of the interior are neither fanatics nor zealots. Their orthodoxy is infinitely more moderate than that of their brethren in Northern and Eastern Europe. Physically, the Jew is well endowed. In spite of oppression and poverty, he is, as a rule, well built, tall, and muscular, as he needs to be, for all the hard work in the cities, heavy porterage, wood-chopping, and so forth, falls to his portion. He is not very intelligent, his mental degeneration being a marked feature that strikes every stranger who comes into contact with him. Living in the midst of what is little more than a horde of barbarians, little else could be expected. The Spanish Jews of the seaports and larger cities are practically "Europeanised ;" they live after European fashion, and, in a measure, in a European atmosphere. It is, perhaps, unfortunate that the foreigners from whom their notions of the West and Western culture are derived, do not in a great many respects form a desirable model for imitation. For the most part protested as agents—under come pretext or other always—of foreign Consuls and officials, many of these Spanish Jews make ill use of the privileges they enjoy; and the Moors, who naturally resent this, make the unhappy Israelites of the interior pay heavily for the privilege of protection enjoyed by the " Spaniards " on the coast. There is no form of outrage or brutality to which these unhappy native Jews are not subjected by irresponsible local Governors and administrators. The writer of this paper recollects a case where an elderly Jew, supposed to have made a complaint about previous ill-treatment, was brought before a local official rejoicing in the designation Hadj Jellali and beaten by this functionary on the eyes with a slipper until his eyeballs burst.

Of the literary activity which distinguished the Spanish and Moorish Jews in the Middle Ages, there is no sign nowadays among the Jewish subjects of Maley Hassan. For science the well-to-do care but little ; the poor, not at all. The number of those who devote themselves to the study of Hebrew even is ex- tremely small. The main causes of this indifference to educa- tion is put down to the fact that there are neither schools nor printing-presses in the country, so that, except for the better- off classes, books in any language are unattainable. And until this want is supplied, the Jews, like the Moors, will make little progress in culture. The Jewesses of Morocco are as ignorant as their Mahommedan sisters, but are not kept in the same seclusion. In the seaports, the wives and daughters of the Spanish Jews now enjoy the same liberty as in Southern. Europe, and if popular report does nht err, they make anything but good use of their privileges. But report in towns where seclusion is a rule, always exaggerates the sine of the non-secluded.