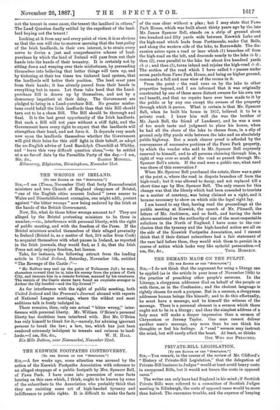 THE WRONGS OF IRELAND.

[To THE EDITOR OW THE SPECTATOR:1 Bea,—I see (Times, November 21st) that forty Nonconformist ministers and two Church of England clergymen of Bristol, "one of the English cities nearest Ireland" (even nearer to Wales and Disestablishment contagion, one might add), protest against "the bitter wrongs " now being endured by the Irish at the hands of the British Government.

Now, Sir, what do those bitter wrongs amount to P They are alleged by the Bristol protesting ministers to be three in number,—viz., interference with personal liberty, with the right of public meeting, and with the freedom of the Press. If the Bristol ministers availed themselves of their alleged proximity to Ireland (Bristol is, as a matter of fact, 264 miles from Cork) to acquaint themselves with what passes in Ireland, as reported in the Irish journals, they would find, as I do, that the Irish Press not only enjoys freedom, but license.

Take, for instance, the following extract from the leading article in United Ireland, Saturday, November 5th, entitled "The Revenge of the Castle ;"—

" Mr. Balfour may seal up the gates of Tallamore Jail ; he may, shameless coward that he is, take his enemy from the prison of Cork City, and immure him in a remote fortress, manned by his creatures. The vermin of the Castle stews have found an exquisite avenger in Arthur the lily-handed—and the lily-livered!"

As for interference with the right of public meeting, both United Ireland and the Freeman's journal abound with reports of National League meetings, where the wildest and most seditious talk is freely indulged in.

There remains, then, only one actual "bitter wrong," inter- ference with personal liberty. Mr. William O'Brien's personal liberty has doubtless been interfered with. But Mr. O'Brien has only himself to thank for it,—namely, for advising ignorant 4pereOne to break the law ; a law, too, which has just been rendered extremely indulgent to tenants and ruinous to land-