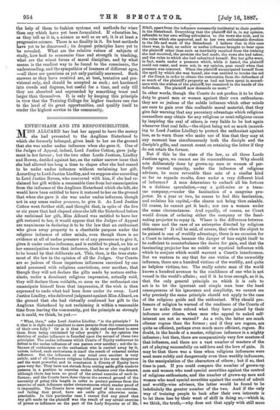 ENTHUSIASM AND ITS RESPONSIBILITIES.

MISS ALLCA.RD has lost her appeal to have the money she had presented to the Anglican Sisterhood to which she formerly belonged, given back to her on the ground that she was under undue influence when she gave it. One of the Judges of Appeal, indeed, Lord Justice Cotton, gave judg- ment in her favour ; but the two other Lords Justices, Lindley and Bowen, decided against her, on the rather narrow issue that she had allowed too long a time to elapse after she had ceased to be under undue influence without reclaiming her gift. According to Lord Justice Lindley, and we suppose also according to Lord Justice Bowen, who concurred with him, if she had re- claimed her gift within a reasonable tints from her emancipation from the influence of the Anglican Sisterhood which she left, she would have been entitled to have it restored to her on the ground that when she gave it she was under undue influence, though not in any sense undue pressure, to give it. As Lord Justice Cotton went further still, and thought that, in spite of the five or six years that bad elapsed since she left the Sisterhood before she reclaimed her gift, Miss Allcard was entitled to have her gift restored to her, it would appear that the Judges of Appeal are unanimous in declaring it to be the law that an enthusiast who gives away property to a charitable purpose under the religious influence of other minds, even though there is no evidence at all of undue pressure or of any pressure so to give it, gives it under undue influence, and is entitled to plead, on his or her emancipation from that influence, that he or she ought not to be bound by that deliberate act. This, then, is the true state- ment of the law in the opinion of all the Judges. Our Courts are so jealous of those imperious influences exercised by one mind possessed with religious convictions, over another, that though they will not declare the gifts made by mature enthu- siasts, under a dominant religious impression, actually void, they will declare them voidable, so soon as the enthusiast can emancipate himself from that impression, if the wish is then expressed to undo what had been done under its sway. Lord Justice Lindley, who delivered judgment against Mee Allcard, on the ground that she had virtually confirmed her gift to the Anglican Sisterhood by not reclaiming it within a reasonable time from leaving the community, put the principle as strongly as it could, we think, be put "What, then," asks Lord Justice Lindley, "is the principle ? Is it that it is right and expedient to save persons from the consequences of their own folly ? Or is it that it is right and expedient to save them from being victimised by other people ? In my opinion the doctrine of undue influence is founded upon the second of these two principles. The undue influence which Courts of Equity endeavour to defeat is the undue influence of one person over another ; not the in- fluence of enthusiasm on the enthusiast who is carried away by it, -unless, indeed, each enthusiasm is itself the result of external undue influence. But the influence of one mind over another is very subtle, and of all influences religious influence is the most dangerous and the most powerful, and to counteract it Courts of Equity have gene very far. They have not shrank from setting aside gifts made to persons in a position to exercise undue influence over the donors, although there has been no proof of the actual exercise of such in- fluence; and the Courts have done this on the avowed ground of the necessity of going this length in order to protect persons from the exercise of such influence under circumstances which render proof of it impossible. The Courts have required proof of its non-exercise, and failing that proof, have set aside gifts otherwise unim- peachable. In this particular case I cannot find any proof that any gift made by the plaintiff was the result of any actual exercise of power or influence on the part of the Lady Superior or of Mr. Nibill, apart from the influence necessarily incidental to their position in the Sisterhood. Everything that the plaintiff did is, in my opinion, referable to her own willing submission to the vows she took, and to the rules which she approved, and to her own enthusiastic devotion to the life and work of the Sisterhood. I believe that in this case there was, in fact, no unfair or undue influence brought to bear upon the plaintiff other than such as inevitably resulted from the training she had received, the promise she had made, the vows she had taken, and the rules to which she had submitted herself. But her gifts were, in fact, made under a pressure which, while it lasted, the plaintiff could not resist, and were not, in my opinion, past recall when that pressure was removed. When the plaintiff emancipated herself from the spell by which she was bound, she was entitled to invoke the aid of the Court in order to obtain the restoration from the defendant of so much of the plaintiff's property as had not been spent in accord- ance with the wishes of the plaintiff, but remained in the hands of the defendant. The plaintiff now demands no more."

In other words, though the Courts do not profess it to be their duty to guard men or women against their own enthusiasm, they are so jealous of the subtle influence which other minds are sure to gain over this malleable moral material, that they give fair warning that any pecuniary advantage which religions counsellors may obtain for any religious or semi-religions cause by inspiring the zeal of others, is very liable to be lost again whenever that zeal fails,—the object being not so much (accord- ing to Lord Justice Lindley) to protect the enthusiast against lose, as to warn those who make use of him that they may at any moment lose simultaneously both the disciple and the disciple's gifts, and cannot count on retaining the latter if they do not retain the former.

But if this be the state of the law, as all three Lords Justices agree, we cannot see its reasonableness. Why should acts deliberately done by grown-up men or women of per- fectly normal capacity, under the influence of religions advisers, be more revocable than acts of a similar kind so far as regards results, done under a very different kind of influence ? A man determines to embark all his fortune in a dubious speculation,—say a gold-mine or a tram- car company,—under the fascination of a sanguine pro- jector. In a year or two, he ceases to feel this fascination, and reclaims his capital,—the shares not being then saleable. Of course, he cannot get it back ; nor can a woman under the same circumstances. And equally, of course, no Court would dream of ordering either the company or the fasci- nating projector to repay it,. Where is the difference between this case and the case of an enterprise directed by religious enthusiasm P It will be said, of course, that when the object to be gained is one of worldly advantage, there is no occasion for a Court to interfere, because the danger of loss might itself to be sufficient to counterbalance the desire for gain, and that the fascinating projector has no subtle or mystical influence with which to conjure which would warrant a Court's interference. But we venture to say that for one victim of the unworldly influence, there are a hundred victims of the worldly, and quite as helpless victims, too. The really astute man of the world knows a hundred avenues to the confidence of one who is not versed in the world's affairs ; and if it be true enough, as it is, that the only general principle on which it is safe to act is to let the ignorant and simple man bear the hard consequences of his ignorance and simplicity, we cannot see why precisely the same principle should not apply to the case of the religions guide and the enthusiast. Why should pro- fessors of religion be warned of the readiness of the Courts of Law to make them refund what they have gained by their influence over others, when men who appeal to naked self- interest are not so warned? As a rule, the latter are much oftener rogues than the former ; and if they are rogues, are quite as efficient, perhaps even much more efficient, rogues. No doubt, in the hands of a master, religions influence is a mighty influence ; but then, there are comparatively very few masters of that influence, and there are a vast number of masters of the art of playing successfully on self-love and the love of gain. It may be that there was a time when religions influences were used more subtly and dangerously even than worldly influences, in the manipulation of the characters of others ; but if so, that time is past. If you could compare the number of grown-up men and women who need special securities against the control of religious enthusiasts, and the number of grown-up men and women who need special securities against the control of adroit and worldly-wise advisers, the latter would be found to be indefinitely the greater number of the two. And if the only way of training people to look after their own interests is to let them lose by their want of skill in doing so,—which is, we think, the truth,—why does not that apply with still more