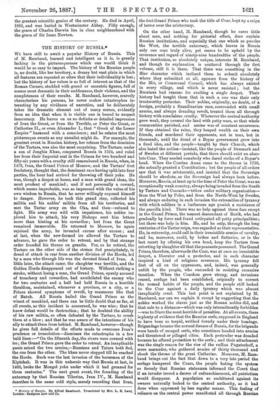 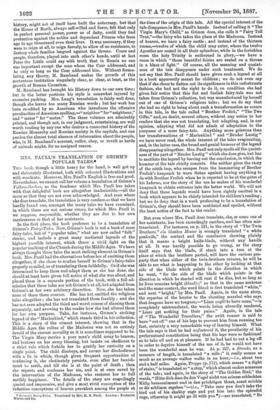 THE HISTORY OF RUSSIA.* WE have still to await a

popular History of Russia. This of M. Ramband, learned and intelligent as it is, is greatly lacking in the picturesqueness which one would think it would be so easy to impart. The history of the Russian people is, no doubt, like her territory, a dreary but vast plain in which all features are repeated so often that their individuality is lost; bat the history of her rulers is as full of interest as that of the Roman Canals, studded with grand or eccentric figures, full of scenes most dramatic in their suddenness, their violence, and the completeness of their results. M. Rambaud, however, scarcely characterises his persons, he never makes catastrophes in- teresting by any vividness of narrative, and he deliberately takes the dramatic element out of many scenes, evidently from an idea that when it is visible one is bound to suspect inaccuracy. He leaves on us no definite or detailed impression of Ivan the Great, or Ivan the Terrible, or Peter the Great, or Catherine II., or even Alexander L, that " Greek of the Lower Empire" harassed with a conscience ; and he relates the most • picturesque events as any annalist might do. For example, the greatest event in Russian history, her release from the dominion of the Tartars, was also the most surprising. The Tartars, under a son of Jenghis Khan, conquered Russia in 1224, and ruled her from their Imperial seat in the Crimea for two hundred and fifty-six years with a cruelty still remembered in Russia, when, in 1478, Ivan, the Grand Prince of Moscow, and the Tartars' first feudatory, thought that, the dominant race having split into four parties, the hour had arrived for throwing off their yoke. He was, though a despot at home, and a man with grand ideas, the most prudent of mankind ; and if not personally a coward, which seems improbable, was so impressed with the value of his own wisdom to Russia, that he never willingly exposed himself to danger. However, he took this grand step, collected his militia and his nobles' militia from all his territories, and met the Tartar army on the Oka, and then—refused to fight. His army was wild with impatience, his nobles im- plored him to attack, his very Bishops sent him letters more than hinting at his cowardice ; but Ivan the Great remained immovable. He returned to Moscow, he again rejoined the army, he invented excuse after excuse ; and at last, when the new-formed ice allowed the Tartars to advance, he gave the order to retreat, and by that strange order founded his throne on granite. For, as he retired, the Tartars on the other side of the stream fled precipitately, in dread of attack in rear from another division of the Horde, led by a man who through life was the devoted friend of Ivan. A little later, the attack came, the slaughter was terrible, and the Golden Horde disappeared out of history. Without striking a stroke, without losing a man, the Grand Prince, openly accused of treachery and cowardice, had annihilated the enemy who for two centuries and a half had held Russia in a horrible thraldom, maintained, whenever a province, or a city, or a Prince showed symptoms of revolt, by massacres like that of Batuk. All Russia hailed the Grand Prince as the wisest of mankind, and there can be little doubt that as far, at all events, as this incident is concerned, he was wise ; that he knew defeat would be destruction ; that he doubted the ability of his raw militia, so often defeated by the Tartars, to crush them at a blow; and that he was aware of the intentions of his ally to attack them from behind. M. Rambaud, however—though he gives Tall details of the efforts made to overcome Ivan's prudence or irresolution—dismisses the catastrophe in a few bald lines :—" On the fifteenth day, the rivers were covered with ice; the Grand Prince gave the order to retreat. An inexplicable panic seized the two armies,—Russians and Tatars both fled, the one from the other. The khan never stopped till he reached the Horde. Such was the last invasion of the horsemen of the Kiptchak. It was in this unheroic way that Russia at last, in 1480, broke the Mongol yoke under which it had groaned for three centuries." The next great event, the founding of the autocracy by that Russian Tiberius, Ivan IV., M. Rambaud describes in the same cold style, merely recording that Ivan,

the first Grand Prince who took the title of Czar, kept up a reign of terror over the aristocracy.

On the other hand, M. Ramband, though he cares little about men, and nothing for pictorial effect, does explain Russian institutions, and especially that one which so puzzles the West, the terrible autocracy, which leaves in Russia only one man truly alive, yet seems. to be upheld by the reverence and regard of ninety-nine hundredths of the people. That institution, so absolutely unique, interests M. Rambaud, and though its explanation is scattered through the first volume, still it is there. That there was something in the Slav character which inclined them to submit absolutely where they submitted at all, appears from the history of the Mir, or Communal Council, which has always existed in every village, and which is never resisted ; but the Russians had reasons for exalting a single despot. Their history had taught them that in such a one was their only trustworthy protector. Their nobles, originally, no doubt, of a foreign, probably a Scandinavian race, surrounded with small armies, and always dreading revolt, treated them all through history with scandalous cruelty. Whenever the central authority grew weak, they covered the land with petty wars, so that whole communities perished, and amine was of constant occurrence. If they obtained the reins, they heaped wealth on their own friends, and murdered their opponents, not in tens, but in thousands, until the dread of a Boyar government grew into a fixed idea, and the people—taught by their Church, which also hated the nobles—insisted, like the people of Denmark and of Sweden at different periods, that there should exist an abso- lute Czar. They needed somebody who dared strike off a Boyar's head. When the Czarina Anna came to the throne in 1730, she actually granted a Constitution ; but the people of all orders saw that it was aristocratic, and insisted that the Sovereign should be absolute, as the Sovereign had always been before. Moreover, Russia, at least up to the time of Peter the Great, was an exceptionally weak country, always being invaded from the South by Tartars and Cossacks—tribes under military organisation— from the West by Poles, and from the North-West by Swedee, and always enduring in each invasion the extremities of tyranny with which soldiers in a barbarous age punish a resistance of the guerilla kind. There was no help against these foes except in the Grand Prince, the nearest descendant of Rurik, who had gradually by force and fraud extirpated all petty principalities ; but there was help in him. He, and he only, through the long centuries of the Tartar reign, was regarded as their representative. He, in extremity, could call in their irresistible armies of cavalry, and he, moreover, could, by bribes and flatteries, or in the last resort by offering his own bead, keep the Tartars from extorting by slaughter all that the peasants possessed. The Grand Prince, therefore, afterwards the Czar, was at once an irresistible despot, a liberator and a protector, and in each character inspired a kind of religious reverence. His tyranny fell first of all on the oppressors, and, indeed, was generally unfelt by the people, who succeeded in resisting excessive taxation. When the Czardom grew strong, and invasions ceased, serfage had been established, originally to correct the nomad habits of the people, and the people still looked to the Czar against a daily tyranny which was almost inexplicably cruel. This last point is not explained by M. Ramband, nor can we explain it except by suggesting that the nobles worked the slaves jest as the Roman nobles did, and that sale to a distance—which was only intermittently forbidden —was to Slave the most horrible of penalties. At all events, there is plenty of evidence that the Russian serfs, supposed in England to have been so torpid, writhed fiercely under their bondage. Brigandage became the normal disease of Russia, for the brigands were bands of escaped serfs, who sometimes banded into armies and threatened or pillaged cities. Each pretender was dreaded because he offered protection to the serfs ; and their attachment was the single reason for the rise of the ruffian Pagatscheff, a mere marauder, who gathered armies of thirty thousand and shook the throne of the great Catherine. Moreover, M. Ram- baud brings out the fact that down to a very late period the serfage hampered the Czars, the people hating the system eo fiercely that Russian statesmen informed the Court that if an invader issued a decree of enfranchisement, all patriotism would disappear. A population so embittered against its owners naturally looked to the central authority, as it had done when oppressed by less regular means. This feeling of reliance on the central power manifested all through Russian

history, might not of itself have built the autocracy, but that the House of Rurik, always self-willed and fierce, felt that only in perfect personal power, power as of deity, could they find protection against the nobles and dependent Princes who from age to age threatened even their lives. It was necessary, if they were to reign at all, to reign fiercely, to allow of no resistance, to destroy whole families leagued against the throne. Czars and people, therefore, played into each other's hands, until at last Peter the Little could say with truth that in Russia no one was important except the man whom the Czar addressed, and he only so long as the Czar addressed him. Without formu- lating any theory, M. Ramband makes the growth of this portentous institution singularly clear, as clear, at leant, as the growth of Roman Cresarism.

M. Ramband has brought his History down to our own time; but in the latter portions his style is somewhat injured by excessive packing. Mrs. Lang's translation is fairly well done, though she leaves too many Russian words ; bat her work has been re-edited by an American who introduces the offensive peculiarities of American spelling,—" neighbor " for " neighbour," and " meter" for " metre." The three volumes are admirably printed, and though not, in our judgment, entertaining, are well worth reading by any one who desires a connected history of the Russian Monarchy and Russian society in the capitals, and can pardon the almost total absence of information about the people, who, in M. Ramband's account, suffer, obey, or revolt as herds of animals might, for no assigned reason.