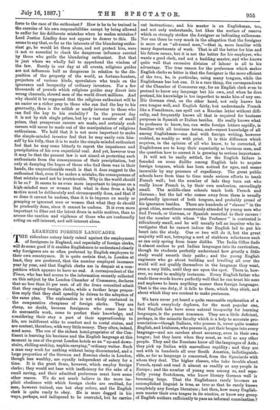 THE ridiculous outcry lately raised against the employment of foreigners in England, and especially of foreign clerks, will do some good if it enables Englishmen to understand clearly why foreigners are so often preferred by English employers to their own countrymen. It is quite certain that, in London at least, they are preferred, that the number employed increases year by year, and that English clerks are in despair at a com- petition which appears to have no end. A correspondent of the Times, who has had access to the information recently collected on this subject by the London Chamber of Commerce, declares that no less than 35 per cent. of all the firms consulted admit that they employ foreign clerks, while a further large propor- tion reply that they shall speedily be driven to the adoption of . the same plan. The explanation is not wholly contained in the comparative cheapness of foreign clerks. They are cheap, no doubt, because foreigners who come here to do mercantile work, come to perfect their knowledge, and considering their stay a part of their apprenticeship to life, are indifferent alike to comfort and to social status, and are content, therefore, with very little money. They often, indeed, need none. The son of the richest hotel-proprietor of the Con- tinent is learning his business and the English language at this moment in one of the great London hotels as an " up-and-down- stairs, shilling-seeking, napkin-carrying," ordinary waiter. Such a man may work for nothing without being disoontented, and a large proportion of the German and Russian clerks in London, though less wealthy, are equally independent of salary for a time. It is the great firms, however, which employ foreign clerks ; they would not bear with inefficiency for the sake of a small saving, and their admitted preference must have some other reason. We do not much believe in the more im- plicit obedience with which foreign clerks are credited, for men, however trained, can but obey orders, and the English clerk is quite ready to obey. He is more dogged in his ways, perhaps, and indisposed to be overruled, but he carries out instructions; and his master is an Englishman, too, and not only understands, but likes the surface of reserve which so strongly strikes the foreigner as indicating sullenness. Nor can there be very much in the allegation that the foreigner is more of an "all-round man,"—that is, more familiar with many departments of work. That is all the better for him and his future career, but it is not the better for his employer, who wants a good clerk, and not a budding master, and who knows quite well that excessive division of labour is all to his advantage. The true reason for the preference which makes English clerks so bitter is that the foreigner is the more efficient of the two, he, in particular, using many tongues, while the Englishman has bat one. It is a rare thing, the correspondents of the Chamber of Commerce say, for an English clerk even to pretend to know any language but his own, and when he does pretend, his knowledge is too imperfect to make him of any use. His German rival, on the other hand, not only knows his own tongue well, and English fairly, but understands French like a Frenchman, can spell out a Russian letter without diffi- culty, and frequently knows all that is required for business purposes in Spanish or Italian besides. He really knows what he professes to know, too, can write foreign letters rapidly, is familiar with all business terms, and—rarest knowledge of all among Englishmen—can deal with foreign writing, however crabbed, as readily as with print. It is this difference which requires, in the opinion of all who know, to be corrected, if Englishmen are to keep their superiority as business men, and the question how to correct it is growing to serious importance.

It will not be easily settled, for the English failure is founded on some dislike among English lads to acquire foreign tongues, which has been noticed for ages, and seems incurable by any pressure of expediency. The great public schools have from time to time made serious efforts to teach French well; but the number of lade they turn out who really know French is, by their own confession, exceedingly small. The middle-class schools teach both French and German ; but the lad who comes away from them is tonally profoundly ignorant of both tongues, and probably proud of his ignorance besides. There are hundreds of " classes " in the great cities, sometimes numerously attended by young men who find French, or German, or Spanish essential to their careers but the number with whom " the Professor " is contented is ridiculously small, and he will usually tell an inquirer who in- vestigates that he cannot induce the English lad to pat his heart into the study. One or two will do it, but the great majority will not, betraying a sort of stubborn reluctance each as can only spring from inner dislike. The India Office finds it almost useless to put Indian languages into its curriculum, though its students perfectly understand how greatly a little study would smooth their paths ; and the young English engineers who go about building and levelling all over the world will not qualify themselves in the language they want, even a very little, until they are upon the spot. There is, how- ever, no need to multiply instances. Every English father who reads these words knows perfectly well that be can trust his sons and nephews to learn anything sooner than foreign languages. That is the one duty, if it falls to them, which they shirk, and about which they are content to make pretences.

We have never yet heard a quite reasonable explanation of a fact which everybody deplores, for the most popular one, that English lads have some natural incapacity for learning languages, is the purest nonsense. They are a little deficient, perhaps, in the mimetic faculty which is a help to accurate pro- nunciation—though Italians, who possess it, never quite master English, and Irishmen, who possess it, pat their brogue into every language—and are careless about accuracy, even in their own tongue; but they learn when they must, as well as any other people. They and the Russians know all the languages of Asia ; they pick np Italian with marvellous rapidity ; and they are met with in hundreds all over South America, indistinguish- able, as far as language is concerned, from the Spaniards with whom they deal. The higher classes, who take trouble about French, speak and read it almost as readily as any people in Europe ; and the number of young men among us, and espe- cially young Scotchmen, who know literary German well is becoming large. That the Englishman rarely becomes an accomplished linguist is true, as true as that be rarely knows completely any foreign literature ; but then, how many English- men master their own tongue in its niceties, or know any group of English authors sufficiently to pass an informal examination P