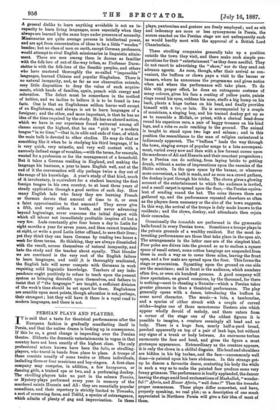 IT is said that a taste for theatrical performances after the European fashion is gradually manifesting itself in Persia, and that the native drama is looking up in consequence. If this be so, a great change is impending over the Persian theatre. Hitherto the dramatic entertainments in vogue in that country have not been exactly of the highest class. The only professional actors known have been the halo, or strolling- players, who travel in bands from place to place. A troupe of these consists usually of some twelve or fifteen individuals, including three or four musicians and boy-singers. A first-class company may comprise, in addition, a few bazagueres, or dancing girls, a trained ape or two, and a performing donkey. The strolling.players take no part in the solemn Teaziee, or Mystery-plays performed every year in memory of the murdered saints Hussein and Ali they are essentially popular comedians, and their repertory is strictly limited to Temasha, a sort of screaming farce, and Tek/fd, a species of extravaganza, which admits of plenty of gag and improvisation. In these

plays, pantomime and gesture are freely employed; and as wit and indecency are more or less synonymous in Persia, the scenes enacted on the Persian stage are not nnfrequently such as would hardly meet with the approval of a British Lord Chamberlain.

These strolling companies generally take up a position outside the town they visit, and there make such simple pre- parations for their " entertainment " as they deem needful. They do not resort to advertising the " show," nor do they send out advance agents. As soon, though, after their arrival as con- venient, the buffoon or clown pays a visit to the bazaar or bazaars, where he announces the programme and gives notice when and where the performance will take place. To do this with proper effect, he dons an outrageous costume of many colours, gives his face a coating of yellow paste, paints rings round his eyes, reddens his nose, stuffs a big hump on his back, plants a huge turban on his head, and finally provides himself with a far, or late. He is accompanied by a couple of musicians, a singing boy, and his trained donkey got up so as to resemble a Mollah, or priest, with a clerical head-dress round his capacious ears, a pair of baggy troneers on his hind legs, and a robe en mite reaching to the ground. The animal is taught to stand upon two legs and !alum ; and in this position the resemblance to the man of religion caricatured is ludicrously apparent. The " buffoon " leads the way through the town, singing scraps of popular songs to a lute accompani- ment, varied every now and then with a few fervent curses upon themurderers of Ali and Hussein and their remotest progenitors ; for a Persian can do nothing, from laying bricks to getting drunk, without a series of imprecations upon the enemies of the Shiite saints. In the open space by the bazaar, or wherever more convenient, a halt is made, and as soon as a crowd gathers, the donkey is put through his tricks. The clown gives a glowing account of the entertainment to which the audience is invited, and a small carpet is spread upon the floor,—the Persian equiva- lent of sending round the hat. The coins thrown there are gathered up, and the performance repeated elsewhere as often as the players deem necessary or the size of the town suggests. In this way, the arrival of the troupe is duly made known to the residents ; and the clown, donkey, and attendants then rejoin their comrades.

Occasionally the temashde are performed in the gymnastic halls found in every Persian town. Sometimes a troupe plays in the private grounds of a wealthy resident. But the most in- teresting performances are those that take place in the open air. The arrangements in the latter case aro of the simplest kind. Four poles are driven into the ground so as to enclose a square space of small extent, some cotton hangings are suspended from these in such a way as to cover three sides, leaving the front open, and a few mats are spread upon the floor. This forms the stage or proscenium. Squatting upon the ground on one side are the musicians ; and in front is the audience, which numbers often five, or even six hundred persons. A good company will draw spectators, on grand occasions, by the thousand, for there is nothing—next to cheating a Sunnite—which a Persian takes greater pleasure in than a theatrical performance. The play generally opens with a dance, introducing the buffoon in some novel character. The music—a late, a tambourine, and a species of zither struck with a couple of curved sticks—begins one of those monotonous Eastern airs which appear wholly devoid of melody, and there enters from a corner of the stage one of the oddest figures it is possible to imagine, a creature seemingly all head and no body. There is a huge face, nearly half-a-yard broad, perched apparently on top of a pair of lank legs, but without any signs of a trunk or body between. An enormous turban surmounts the face and head, and gives the figure a most grotesque appearance. Extraordinary as the creature appears, it is only the clown in a skilful disguise. His head and shoulders are hidden in his big turban, and the face—uncommonly well done—is painted upon his bare abdomen. In this strange get- up he dances a favourite dance, contorting his body the while in such a way as to make the painted face produce some very fanny grimaces. The performance is loudly applauded, the dancer leaving the stage amid loud exclamations of Mahal/eh," wonder- ful !" Aferin, and Bazar Aferin," well done !" Then the &maim proper commences. These plays differ somewhat, and have, properly speaking, no real plot ; so a description of one much appreciated in Northern Persia will give a fair idea of most of them.