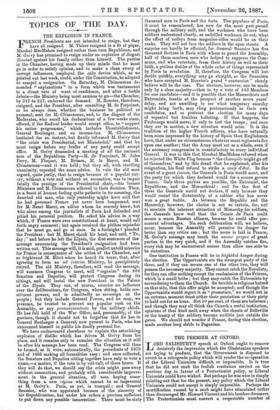 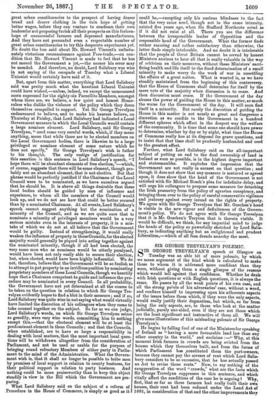 THE PREMIER AT OXFORD.

LORD SALISBURY'S speech at Oxford ought to remove decisively the impression which the Gladstonian speakers are trying to produce, that the Government is disposed to revert to a retrograde policy which will render the co-operation of the Liberal Unionists difficult or impossible. It is true that he did not snub the foolish resolution carried on the previous day in favour of a Protectionist policy, as Liberal Unionists could have wished. But perhaps he was wise in simply pointing out that for the present, any policy which the Liberal Unionists could not accept is simply impossible. Perhaps the mortification caused by a snub might have stimulated rather than discouraged Mr. Howard Vincent and his brother-dreamers. The Protectionists must convert a respectable number of

great urban constituencies to the prospect of having dearer bread and dearer clothing in the vain hope of getting better wages, before they can venture to condemn their own leader° for not proposing to risk all their prospects on this forlorn- hope of unsuccessful farmers and depressed manufacturers. And they have not persuaded even a respectable number of great urban constituencies to try this desperate experiment yet. No doubt the less said about Mr. Howard Vincent's unfortu- nately victorious reconnaissance against Free-trade,—on con- dition that Mr. Howard Vincent is made to feel that he has not moved the Government a jot,—the sooner his error may be mended. And therefore, no doubt, Lord Salisbury was wise in not saying of the escapade of Tuesday what a Liberal Unionist would certainly have said of it.

But, apart from this matter, everything that Lord Salisbury said was pretty much what the heartiest Liberal Unionist could have wished,—unless, indeed, we except the unmeasured scorn expressed for the eighty-six Parnellite Members, amongst whom there are, we believe, a few quiet and honest Home- rulers who dislike the violence of the policy which they deem themselves compelled to support. Yet Sir George Trevelyan endeavoured to believe, and to make his hearers believe, on Thursday at Paisley, that Lord Salisbury had indicated a Local Government measure in which the Local Councils would contain a large nominee element. Lord Salisbury, said Sir George Trevelyan, " used some very careful words, which, if they mean anything, mean that while there are to be elected members on the Local Government bodies, there is likewise to be a large privileged or nominee element of some nature which he does not specify," Sir George Trevelyan's wish is father

to his thought. The only vestige of justification for this assertion is this sentence in Lord Salisbury's speech, "I hope there will be abundant elements of free election,"—which, of course, suggests that there will be some element, though pro- bably not an abundant element, that is not elective. But that phrase would be perfectly justified if the Chairman of the Local Council were to be nominated, as we have ourselves argued that be should be. It is above all things desirable that these local bodies should be guided by men of influence and experience, to whom all the members of the Council would look up, and we do not see how that could be better secured than by a nominated Chairman. At all events, Lord Salisbury's speech cannot suggest anything but the nomination of a minority of the Council, and as we axe quite sure that to nominate a minority of privileged members would be a very serious mistake even in the interests of property, it is a mis- take of which we do not at all believe that the Government would be guilty. Instead of strengthening, it would really weaken the influence of property in these Councils,for the elected majority would generally be piqued into acting together against the nominated minority, though if all had been elected, the very same men who as nominees would be utterly paralysed, would have been not only easily able to secure their election, but, when elected, would have been highly influential. We do not, therefore, believe that the Government will be so foolish as to attempt to put property in an invidious position by nominating proprietary members of these Local Councils, though we heartily hope that a Chairman competent to guide and influence the pro- cedure may be nominated in every Council. In all probability, the Government have not yet determined at all the course to be taken on the question in relation to which Sir George Tre- velyan evidently hopes to find a blot in their measure ; and if so, Lord Salisbury was quite wise in not saying what would virtually have limited the discretion of his colleagues when they came to take counsel together on the subject. So far as we can judge, Lord Salisbury's words, on which Sir George Trevelyan seizes so greedily, were very wise words, committing him to nothing except this,—that the electoral element will be at least the predominant element in these Councils ; and that the Councils, when established, are to have so large a responsibility in dealing with local matters, that the most important local ques- tions will be withdrawn altogether from the consideration of Parliament, and not be used or usable for the purpose of bringing round refractory Members of either party in Parlia- ment to the mind of the Administration. What the Govern- ment wish is, that it shall no longer, be possible to bribe men by promises of local support in relation to county business, for their political support in relation to party business. And nothing could be more praiseworthy than to keep this object steadily in view in the Bill which the Government are pre- rin

pag. What Lord Salisbury said on the subject of a reform of Procedure in the House of Commons, is simply as good as it

could be,—excepting only his curious blindness to the fact that the very same need, though not in the same intensity, existed five years ago, when Sir Stafford Northcote acted as if it did not exist at all. There you see the difference between the irresponsible leader of Opposition and the responsible head of the Government. What the former finds rather amusing and rather satisfactory than otherwise, the latter finds simply intolerable. And no doubt it is intolerable that the people of Great Britain cannot be served by honest Ministers anxious to hear all that is really valuable in the way of criticism on their measures, without these Ministers' sacri- ficing health and life itself to the fixed determination of a small minority to make worry do the work of war in unsettling the affairs of a great nation. What is wanted is, as we have steadily maintained from the beginning of this controversy, that the House of Commons shall determine for itself by the mere vote of the majority when discussion is to cease. And then discussion must cease. If the Government of the day abuses the power of guiding the House in this matter, so much the worse for the Government of the day. It will soon find itself in a minority. Bat surely the discretion of guiding the House in this matter is not nearly so great and dangerous a discretion as we confide to the Government in a hundred different spheres which affect in the deepest way the welfare of the community. It is time that some one should have power to determine, whether by day or by night, what time the House of Commons really has at its disposal for grave questions, and to insist that that time shall be prudently husbanded and used to the greatest effect.

Further, what Lord Salisbury said on the all-important subject of putting an end to the dual ownership of land in Ireland as soon as possible, is in the highest degree important and statesmanlike. It explodes the impression that the Government are not really in earnest on that question ; and though it does not show that any measure is matured or agreed upon, it does show that the head of the Government is not satisfied with Sir Michael Beach's plea for indefinite delay, and will urge his colleagues to propose some measure for detaching the Irish peasantry from the policy of agrarian conspiracy, and bringing them over to the policy of careful conservative vigilance and jealousy against every inroad on the rights of property. We agree with Sir George Trevelyan that Mr. Goschen's hand is visible in the new vigour and definiteness of the Govern- ment's policy. We do not agree with Sir George Trevelyan that it is Mr. Goschen's Toryism that is therein visible. It would be difficult, we think, for any impartial mind to judge the heads of the policy so powerfully sketched by Lord Salim- bury, as indicating anything but an enlightened and prudent Liberalism,—which of all foes dreads anarchy the most.