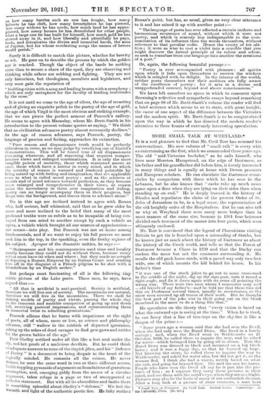 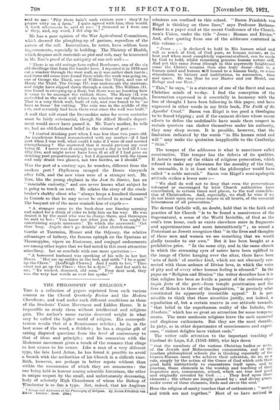 MORE SMALL TALK AT WREYLAND.* IT is a real pleasure

to find that Mr. Cecil Torr has resumed his conversations. His new volume of "small talk" is every whit as entertaining as the first, which we commended three years ago.

The old " mid-Victorian bachelor," as he calls himself, who lives near Moreton Hampstead, on tho edge of Dartmoor, as his father and his grandfather did before him, is keenly interested in many things and is equally at homo with Devon peasants and European scholars. He can elucidate the Dartmoor stone-

circles by comparison with those which lie has seen in the Lebanon, but he also knows that " casks take up much more space upon a floor when they are lying on their sides than when standing up on end." He is deeply learned in the history of

Rhodes and repudiates the claim of the present Order of St. John of Jerusalem to be, in a legal sense, the representative of the old knightly order of the Hospitallcrs. But he can also tell us why at Wreyland there were many more hedges than in most manors of the same size, because in 1501 four heiresses divided each tenement of tho manor into four parts, which were ultimately enclosed.

Mr. Torr is convinced that the legend of Phoenicians visiting Britain to get tin is founded upon a misreading of Strabo, but he knows just as much about the history of Dartmoor as about the history of the Greek world, and tells us that the Forest of Dartmoor became a Chase iu 1239 and that the Duchy can enclose the moor but not the commons surrounding it. Ho recalls the old pack-horse roads, with a paved way only two feet wide, one of which mounts the hill behind his house. In his father's time

" it was one of the stock jokes to go out to some cross-road in the middle of the night, dig up the sign-post, turn it round a right-angle, and fix it down again with its arms all pointing the wrong way. There wore two men whom I remember very well —old friends of my father's—and ho told mo that these two did this on Dartmoor several times, usually in snowstorms, as tha snow soon covered up all traces of their work. But ho thought the best part of the joke was in their going out on the bleak moorland in the snow to do a thing like that."

He speculates on the theory that " every vision is based on

what the outward eye is seeing at the time." When he is tired, he can fancy that a line of tree-tops on the sky-line is like a dragon of the prime :-

" Some years ago a woman said that she had seen the Devil, when she had only seen the Rural Dean. She lived in a lonely cottage ; and, when the Devil went to Widdicombe on 21 October, 1638, he called there to inquire the way, and he asked for water—which betrayed him by going off in steam. Now the Rural Dean was dressed in black and mounted on a big black horse ; and it was a foggy day, so that lie loomed up large. Not knowing the story, lie called there to inquire the way to Widdicombe, and asked for water also, but did not get it., as the woman fled. I think she had a vision, merely based on what she saw, and going far beyond that. She said she saw his horns. People who have seen the Devil all say he is just like the pic- tures of him : so I suppose they carry these pictures in their mind, and see them with the mind's eye, when they are in a fright. Pictures may also be the basis of many of our outlandish dreams. After a long look at a picture of some centaurs, a man hero • Small Talk at Wreyland. By Cecil Torr. Second Maim. Cambridge: at the University Press. pat =LI

said to me ` Pity there bain't such critters now : they'd be proper vitty on a farm.' I quite agreed with him, they would. A. week afterwards ho said to me : 1 dreamed as I were one o' they, and, my word, I did slap in.' " Ho has a poor opinion of the War Agricultural Committees, which decreed the ploughing-up of pasture, regardless of the nature of the soil. Innovations, ho notes, have seldom been improvements, especially in building. The Ministry of Health, which despises such materials as pia., and cob, may be interested in Mr. Torr's proof of the antiquity of one cob wall :—

" There is an old cottage here called Bowhouse, one of the six old dwellings that form the hamlet here. I repaired it in 1919 and cut a window through the west wall, as it was rather dark inside ; and three old coins were found there while the work was going on, one of George the Third, one of William the Third, and one of Henry the Third. The George III. was underneath the staircase, and might have slipped down through a crack. The William III. was found in sweeping up a floor, but there was no knowing how it came to be amongst the rubbish there. The Henry M. was embedded in the west wall where tho window was cut through. That is a very thick wall, built of cob, and was found to be ' as hard as brass ' for cutting. The coin was in the middle of the cob, and certainly had been there ever since the wall was built."

A wall that will stand the Devonshire rains for seven centuries must be fairly substantial, though Sir Alfred Mond's depart- ment would never have passed it. Mr. Torr's mother, he tells Us, had an old-fashioned belief in the virtues of port :- " I started drinking port when I was less than two years old. An injudicious friend remonstrated with my mother—if I had port when I was well, what could I take if I were ill and needed strengthening ? She answered that it would prevent my ever being ill. I never was ill enough to spend a day in bed till I was fifty-five, and might never have been ill at all if I had gone on drinking port proportionately ; but I degenerated with the times and only drank two glasses, not two bottles, as I should."

Was tho port of a century ago, he wonders, different from the modern port ? Phylloxera ravaged the Douro vineyards after 1878, and the new vines were of a stronger sort. Mr. Torr, like the young elephant in the Just So Stories, has an " insatiable curiosity," and one never knows what subject he is going to touch on next. He relates the story of the stock- broker's shabby client who " always keeps a hundred thousand in Consols so that he may never be reduced to actual want." The buoyant air of the moor reminds him of angels :-

" A stranger came to the back-door one Sunday morning and asked for a drink of cider to help him on his way. He was denied it by the maid who was in charge there, and thereupon he said to her ` You know not what you do. You might be entertaining angels unawares.' To which she answered : Get thee 'long. Angels don't go drinkin' cider church-times.' " Goethe at Taormina, Homer and the Odyssey, the relative advantages of bribery, the famous epitaph on the Spartans at Thermopylae, vipers on Dartmoor, and conjugal endearments are among other topics that we had noted in this most attractive miscellany. Let us conclude with one more quotation :- " A bereaved husband was speaking of his wife in her last illness. ` Her sat up sudden in the bed, and saith " I be a-goin' up the Chwe." [Lustleigh Cleave.] And I saith to her, " Thee canst not go up the Chive : thee be a-dyin'." And her saith to me, " Ye wicked, dommed, old mon." Poor dear soul, they was the very last words as ever her spoke.' "