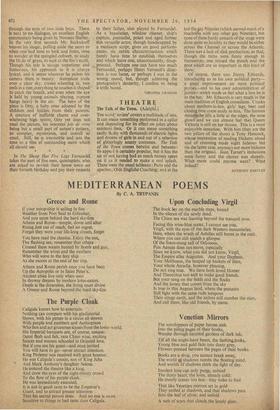 The Talk of the Town. (Adelphi.) THE word review' covers a multitude of sins. It can mean something performed in a cellar and depending for its effect on jokes about existenti. lism. Or it can mean something really fli.shy with thousands of electric lights and dozens of girls in and out of a selection of glitteringly scanty costumes. The Talk of the Town comes betwixt and between: its appe..1 is certainly popular, but it has the air of not having had as much money spent on it as it needed to make a real splash. There were the usnal tableaux: Paris and the apaches; Olde Enghshe Coaching; and at the

lust the gay Nineties (which seemed much of a muchness with any other gay Nineties), but none of these hardy annuals of the stage were done quite so lavishly as they would be either across the Channel or across the Atlantic. There was a lack of slick production, so that, though the turns were funny enough in themselves, one missed the punch and the pace which are so important in this kind of show.

Of course, there was Jimmy Edwards, introducing us to his own political party— a great improvement on most political parties—and to his own administration of justice—which made us feel what a loss he is to the bar. Mr. Edwards is very much in the main tradition of English comedians. Cracks about mothers-in-law, girls' legs, beer and closing time come easily to him. The famous moustache lifts a little at the edges, the nose glows and we can almost feel that Queen Victoria is still on her throne. This is a most enjoyable sensation. With him (they are the two pillars of the show) is Tony Hancock, whose impression of reading Dickens aloud and of crooning made night hideous but (in the latter case, anyway) not more hideous than the original. Joan Turner's imitations were funny and the chorus was shapely. What more could anyone want? What indeed?