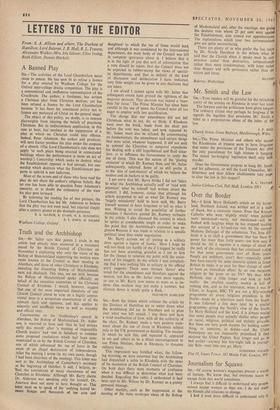 SIR,—I think Mary Holland's article on my home- land, Northern Ireland, was written not in a state of shock, but a catatonic trance. Even that Roman Catholic who went 'slightly white' when politics were mentioned—sorry, not mentioned—will be flushed with laughter when he has stopped reading this account of a hit-and-run visit by the current Madame Defarges of the columnists. Yes, how dif- ficult it is to shift a government that has been in power for more than forty years—yet how easy it should be. All it requires is a change of mind on the part of the electorate that has continued voting for that same government over all those years. People are stubborn, aren't they—especially when they have exactly the same electoral system as Great Britain to make it so easy for their change of mind to have an immediate effect. Sono one mentions religion in the press or on TV? My dear Miss Holland, stay a little longer and look at both media: the smallest country weekly is full of nothing else, and as for television,' when I was in Ulster, in August, BBC TV put out a fifty-minute" programme all about religious prejudices in the North—made by a television team from the South. It was followed a few days later by a similar programme, giving the North's view of the South. To Mary Holland and her kind, it is always vexing that some people may actually' dislike other people on racial, religious, political and stylistic grounds. But these are very good reasons for holding some- thing, or someone, in dislike—and the Ulster Protestants are not necessarily prejudiced if they mistrust the Ulster Papists. Stay longer and go W bed earlier—anyway less late-night talk in journal- ists' flats—next time you go, Mary.