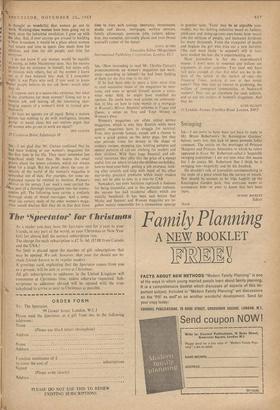 SIR,--1 am glad that Mr. Curran confessed that he had

been looking at our women's magazines for the first time in his life. They merit somewhat less superficial study than that. He, makes the usual Points about the letters columns, which are always good for a laugh. But his point about the cosy in- sularity of the world of the woman's magazine is somewhat out of date. For example, for some un- explained reason he omitted to mention Woman's Mirror in his survey. Last week's issue carried the lliirst part of a thorough investigation into the contra- ceptive pill. The following issue carries a similarly thorough study of mixed marriages. And a some- what less cursory study of the other women's maga- zines would disclose that they do in fact deal from