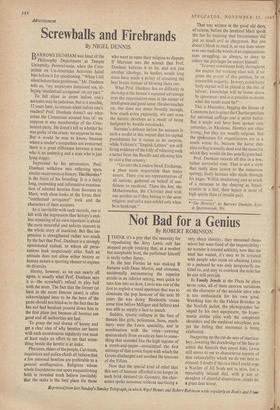 Not Bad for a Genius

ITHINK it's a pity that the necessity for I repudiating the Jerry Lewis cult has stopped people noticing that, at a modest but acceptable level, the performer himself is really rather funny.

In the late Forties he was making B features with Dean Martin, and cineastes, accidentally encountering the superior article in an inferior setting, were quick to turn him into an ikon. Lewis was one of the first to exploit a vocal spectrum that was to dominate the pop humour of the next 10 years (he was doing Bluebottle voices some time before Milligan and Sellers) and was able to supply a face to match.

Sudden, spastic collapse in the face of threats like girls, policemen, lions, mach- inery were the Lewis speciality, and in combination with the voice—yawning spectacularly from an echoey bass to some- thing that sounded like the high register of a comb-and-paper—constituted the first stirrings of that comic fugue with which the Goons discharged and soothed the tensions of the Fifties.

Now that the special kind of relief that this sort of humour afforded is no longer in such brisk demand (in Goonery, the char- acters spoke nonsense without sacrificing a very sharp identity ; they remained them- selves but were freed of the responsibility : no wonder it created addicts), now that the need has waned, it's easy to be irritated with people who insist on chaining Lewis to a pedestal he was only temporarily en- titled to, and easy to overlook the mild fun he can still provide.

In Family Jewels at the Plaza he plays seven roles, all of them cartoon variations on the character of the amiable idiot who is too enthusiastic for his own good. Watching him do the Fabian Britisher in the Norfolk jacket, the photographer be- sieged by his own equipment, the hyper- manic airline pilot with the competent shoulders and the medieval aeroplane, you get the feeling that innocence is being celebrated.

Staggering up the cul-de-sacs of inarticu- lacy, lowering the drawbridge of his face to admit the hazards that appal him, Lewis still seems to me to characterise aspects of that vulnerability which we do our best to conceal. I doubt if this is a film I could urge a Warden of All Souls not to miss, but a reasonably relaxed dad, with it son or daughter of cheerful disposition, might do a great deal worse.