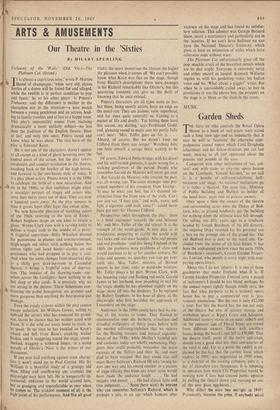 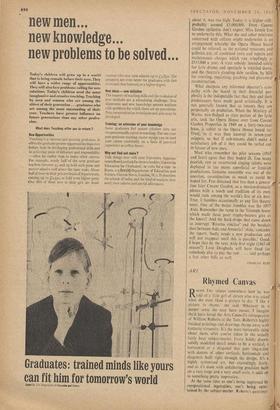 may be well to 'footnote' the otherwise com- prehensive annual report which Lord Drogheda (chairman) and his fellow-directors put out last week, making us all feel oppressed about the pennies and pounds of the case.

Compared with other institutions of 'nat. cul- ture' and with state- or city-run opera houses on the Continent, `Covent Garden,' as we call it, is a bundle of self-contradictions, half- measures and snags. As national institutions go

it is rather a bastard. The state (viz., Ministry of Public Building and Works), as holder of -the head lease, pays rent to private owners.

Once upon a time the owners of the theatre and- surrounding acres were the Dukes of Bed- ford, who, as ground landlords, got the building for nothing when the ultimate lease fell through. On selling out fifty years ago to a syndicate headed by Joseph Beecham. of the pill dynasty, the reigning Duke retained for his personal use a box on the prompt side of the grand tier. The old Bedford box is next to the royal one. Ex- cluded from the terms of all later leases, it has been the undisputed enclave since the early 1920s, of Beecham's successors, Covent' Garden Proper- ties Limited, who people it every night with non- paying opera-lovers.

About this I do not splutter. It is one of those quainteries that make England what it is. If

Covent Garden Properties Limited were a parcel of rackrenters I should be less bland, perhaps. As the annual report rightly though mildly says, the fact that what purports to be a national opera house has to pay a commercial rent is `gro- tesquely anomalous.'-But the rent is only £12,500 a year. For this the board has the use not only of the theatre but also of scenery storage and workshop space at King's Cross and Islington. Additional scenery stores in an outer suburb and on the opposite side of Floral Street are rented from different owners. These, with ancillary

leases, brings the board's rent bill to £50,000. That the theatre itself, point of the entire operation, should cost a good deal less than one-quarter of the total is odd. Up to a point the oddity is ex- plained by the fact that the current lease, which expires in 1991, was negotiated in 1949 when, as a director of the owning company puts it, a

bar of chocolate cost threepence. It is tempting to speculate how much CG Properties would be minting now if they had crossed public opinion by pulling the theatre down and running up one of the new glass egg-boxes.

Why didn't the state buy out-right in 1949? Presumably because the price, if anybody asked

about it, was too high. Today it is higher still: probably around £5,000,000. Even Covent Garden optimists don't expect Miss Jennie Lee to underwrite this. What she and other ministers concerned with culture might underwrite is an arrangement whereby the Opera House board could be relieved, as the national museums and galleries are, of combined rents and repairs and maintenance charges which run cripplingly at £115,000 a year. A state subsidy intended solely for lyric drama and spectacle is whittled down, and the theatre's standing debt swollen, by bills for rewiring, repainting, patching and piecemeal reconstruction.

What sharpens any informed observer's sym- pathy with the board in their financial per- plexity is the indisputable fact that they and their predecessors have made good artistically. It is not generally known that as tenants they are perpetually on probation. When the Ministry of Works, new-fledged as state patron of the lyric arts, took the Opera House over from Covent Garden Properties in 1949 on a forty-two-year lease, it, sublet to the Opera House board (or TruSt, as it was then known) in seven-year snippets, so that if sub-tenants didn't make a satisfactory job of it they could be turfed out in favour of new ones.

Most who remember the pilot seasons (1947 and later) agree that they boded ill. Too many poorish, raw or resurrected singing talents were deployed in too many superficial or freakish productions. Genuine ensemble was out of the question, co-ordination as much as could be hoped for. Few dreamed that less than a genera- tion later Covent Garden, as a musico-dramatic plexus with a touch and tradition of its own, would rank among the world's five or six best. True, it fumbles occasionally as any live theatre must. One of the major fumbles was the 1957 Aida. Remember the ramp in the Triumph Scene which made those poor trophy-bearers give at the knees? And the back-drops that came down to interrupt aitorna vincitor' and the boudoir duet between Aida and Amneris? 'Aida,' concedes the report, 'badly needs a new production and will not reappear until this is possible.' Good. I hope that by the next Aida first night (1967-68 season?) Lord Drogheda will have fixed for somebody else to pay the rent . . . and perhaps a few other bills as well.