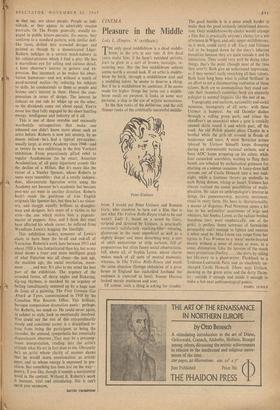 Pleasure in the Middle

Lady L. (Empire, `A' certificate.) THE only good middlebrow is a dead middle- '. brow, in the arts at any rate. A few dead years make him, if he hasn't vanished entirely, start to glow in a sort of brown, nostalgic, re- assuring way. But the live middlebrow seldom seems worth a second look. If an artist is middle- brow by birth, through a middlebrow soul and a middling talent, he seems to deserve a shrug. But if he is middlebrow by ambition, if he seems made for higher things but turns out a middle- brow result on purpose, it looks in some way perverse, a slap in the eye of artistic earnestness.

In the thin ranks of the deliberate, and the still thinner ranks of the artistically successful middle- Peter Ustinov brow, I would put Peter Ustinov and Romain Gary, who combine to turn out a film that is just what The Yellow Rolls-Royce tried to be and wasn't. Lady L. based on a novel by Gary, scripted and directed by Ustinov, is practically everyone's satisfactory stocking-filler--relaxing, glamorous in the most superficial as well as a slightly deeper and more disturbing way, a sort of adult pantomime or strip cartoon, full of preposterous but often funny social observations, full, above all, of Sophia Loren, whose charm makes much of all sorts of neutral moments, whereas, in The Yellow Rolls-Royce and much the same situation (foreign chatelaine of a great house in England has cuckolded husband the audience is expected to love), Jeanne Moreau looked merely mutinous and sour.

Of course, such a thing is asking for trouble.

The good bauble is in a sense much harder to make than the good seriously intentioned decora- tion. Only middlebrows-by-choice would attempt a film that is practically anyone's choice for a wet afternoon in Wigan, and only upper-middlebrows, as it were, could carry it off. Gary and Ustinov fail to be bogged down by the story's inherent banalities because they are quite outside it and its limitations. They could very well be doing other things, that's the point (though most of the time they aren't). Both give an unharassed impression, as if they weren't really stretching all their talents. Both have long been what is called 'brilliant' in an effort to net a disconcerting confusion of those talents. Both are so cosmopolitan they stand out- side their (nominal) countries: both are sinisterly polyglot to normal linguists like the rest of us.

Topography, and uniform, nationality and social nonsense, incongruity of all sorts: with these Ustinov is happiest. An old Daimler dashes through a rolling green park, and (since the chauffeur's an anarchist) when a gate is creakily opened skirts round it and whirls past, off the road. An old Polish pianist plays Chopin in a brothel while the girls sit around in floods of tenderness and tears. A stout Bavarian prince (played by Ustinov himself) keeps drooping during an interminable national anthem, and a busy ADC keeps propping up his salute, while four cassocked anarchists, waiting to fling their bomb, are rebuked by ecclesiastical grimaces for chatting on a solemn occasion. A fancy-dress ball streams out of Castle Howard into a wet mid- night, while a footman throws an umbrella to each flying demon, viking or howl; Ustinov has always realised the comic possibilities of multi- plication. He takes an anthropologist's interest in things like gamesmanship, patriotic sentiment, ritual in every form. His hero is, characterically, a master of disguises. Paul Newman seems a bit lost in his unfamiliar assortment of wigs and whiskers, but Sophia Loren, as the radiant brothel laundress (not, most emphatically, one of the girls), is perfect. Some actresses of formidable personality can't manage to lighten and sweeten it when need be. Miss Loren can range from her tigress in Two Women to a 'mere' warm-hearted beauty without a sense of strain or even, in a sense, diminution. Like the heroine of the much more pretentious Darling . , she starts by telling her life-story to a ghost-writer. Flashback to a Toulouse-Lautrecish Paris and an absolutely un- changed Castle Howard. There, says Ustinov, showing us the green acres and the dotty Daim- ler: outside it enough and inside it enough to make a few neat anthropological points.