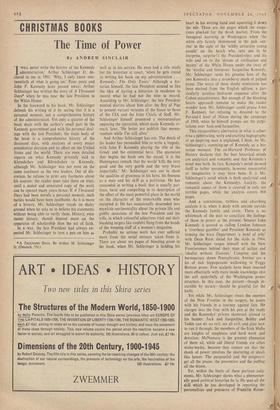 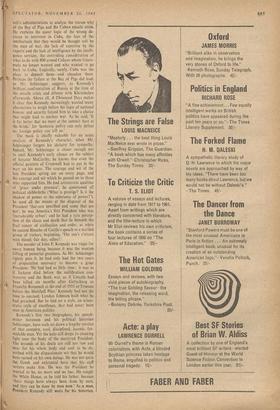 The Time of Power

• WILL never write the history of the Kennedy ',administration,' Arthur Schlesinger Jr. de- clared to me in 1961. Why, 1 only know one- twentieth of what is going on.' our years and John F. Kennedy have passed away; Arthur Schlesinger has written the story of A Thousand Days* when he was near the late President in the White House.

In the foreword to his book, Mr. Schlesinger defends his writing of it by saying that it is a personal memoir, not a comprehensive history of the administration. Yet only a quarter of the book deals with the author's small part in the Kennedy government and with his personal deal- ings with the late President; the main body of the book is a comprehensive history of the thousand days, with analyses of every major presidential decision and its effect on the United States and the world. There are even detailed reports on what Kennedy privately said to Khrushchev and Khrushchev to Kennedy, although Mr. Schlesinger was not even on the same continent as the two leaders. Out of dis- cretion, he refuses to print any footnotes about his sources; the reader must take these on trust, until a sealed and annotated copy of the work can be opened many years hence. If A Thousand Days had been merely a personal memoir, such tactics would have been justifiable. As it is more of a history, Mr. Schlesinger treads on shaky ground when he asks us to believe his statements without being able to verify them. History, even recent history, should depend more on the apparatus of scholarship than the act of faith.

In a way, the late President had always ex- pected Mr. Schlesinger to turn a pen on him as

*A THOUSAND DAYS. By Arthur M. Schlesinger Jr. (Deutsch, 55s.) well as in his service. He even had a title ready for his historian at court, 'when he gets round to writing his book on my administration . . . Kennedy : The Only Years.' Although a his- torian himself, the late President seemed to like the idea of having a historian in residence to record what he had not the time to record. According to Mr. Schlesinger, the late President wanted diarists 'about him after the Bay of Pigs to present variant versions of the fiasco to those of the CIA and the Joint Chiefs of Staff. Mr. Schlesinger himself presented a memorandum opposing the operation, which made Kennedy re- mark later, 'He better not publish that memo- randum while I'm still alive.'

And Arthur Schlesinger has not. The death of his leader has persuaded him to write a tragedy, with John F. Kennedy playing the role of the Greek and the existential hero. The quotation that begins the book sets the mood; it is the Hemingway remark that the world 'kills the very good and the very gentle and the very brave impartially.' Mr. Schlesinger sets out to show the qualities of greatness in his hero, his fineness as a man and his skill as a politician. He has succeeded in writing a book that is usually par- tisan, lucid and compelling in its description of the effect of the most .powerful place in the world on the character of the remarkable man who occupied it. He has occasionally descended into mawkish sentimentality about the private life and public occasions of the late President and his wife, in which colourful adjectives trick out their blushing targets like confetti flung from the hands of the weeping staff of a woman's magazine.

Probably no serious work has ever suffered more from the, serial extracts taken from it. There are about ten pages of bleeding prose in. the book, when Mr. Schlesinger is holding his

heart in his writing hand and squeezing it down the nib. These are the pages which the maga- zines plucked for the throb market. From the Inaugural morning in Washington when 'the white city faintly shimmered in the pale sun- rise' to the sight of the 'wildly attractive young couple' on the beach who turn out to be (surprise, surprise!) the President-elect and his wife and on to the 'dream of civilisation and beauty' of the White House under the sway of the 'wistful and luminous' Jacqueline Kennedy, Mr. Schlesinger turns his genuine love of the two Kennedys into a strawberry mash of pulped prose. The worst Of these slushy revelations has been excised from the English edition, a par- ticularly tasteless bedroom sequence after the Cuban misadventure. But enough of the bleeding hearts approach remains to make the reader wonder how Mr. Schlesinger could praise John F. Kennedy for reusing to descend to the Pat-and-I level of Nixon during the campaign of 1960, when he himself pumps out the palpi- tations over Jack-and-Jacqueline.

This extraordinary aberration in what is other- wise a penetrating, witty and exciting hagiography of an inspiring man is explained, I think, by Mr. Schlesinger's summing-up of Kennedy as a his- torian manqué. The ex-Harvard Professor of History declares that the best historical minds are analytical and romantic and that Kennedy's mind was both. In fact, Kennedy's mind showed itself as rather unromantic, however resourceful or imaginative it may have been. It is Mr. Schlesinger's mind which is both analytical and romantic about the Kennedys. Luckily, the romantie aspect of them is covered in only ten terrible pages, while the analysis covers 860 pages.

And a contentious, ruthless and absorbing analysis it is, when it deals with anyone outside the Kennedy family and circle. There is no whitewash of the past to conciliate the feelings of those in power at the present. Senator John Kennedy is quoted as calling Lyndon Johnson a 'riverboat gambler' and President Kennedy as terming the State Department 'a bowl of jelly' with Dean Rusk slated for the skids in 1964. Mr. Schlesinger ranges himself with the New Frontiersmen behind their man of action and 'idealist without illusions.' Congress and the bureaucracy down Pennsylvania Avenue are a lot of sick hippopotami wallowing in Foggy Bottom prose. Few scalpels have been inserted more effectively with more inside knowledge into the soft underbelly of the Washington power structure. In this case, the patient—though in- curable by nature—should be grateful for the knife.

Yet while Mr. Schlesinger treats the enemies of the New Frontier in the surgery, he jousts with his friends in a tourney against fate. He charges into the fray with his pen at the ready and the Kennedys' private shamrock pinned to his banner. Jack and Jacqueline, Bobby and Teddy can do no evil, see all evil, and plan how to run it through; the members of the Irish Mafia are knights of toughness and hard work and devotion; McNamara is the greatest champion of them all, while old liberal friends are often

wishy-washy, because- they cannot see that the shock of power involves the shattering of ideals like lances. The purposeful and the pragmatic get all the praise; the preventive and the puffing all the blame.

Yet, within the limits of these partisan judg- ments, Mr. Schlesinger shows what a phenomen-

ally good political historian he is. He uses all the skill which he has developed in reporting the personalities and pressures of Franklin Roose- velt's administrations to analyse the reason why of the Bay of Pigs and the Cuban missile crisis. He explains the queer logic of the wrong de- cision to intervene in Cuba, the fear of the intellectuals that they would be thought soft by the men of war, the lack of expertise by the experts and the lack of intelligence by the intelli- gence services, the overriding consideration of what to do with 800 armed Cubans whom Guate- mala no longer wanted and who wanted to go back to Cuba. Logically, surely, Cuba was the place to deposit them—and abandon them. Perhaps the failure at the Bay of Pigs did lead, as Mr. Schlesinger suggests, to Kennedy's brilliant confrontation of Russia at the time of the missile crisis and detente with Khrushchev afterwards. Above all, A Thousand Days makes it clear that Kennedy increasingly wanted many alternatives to weigh before the logic of national honour and security forced him to take a choice that might lead to nuclear war. As he said, 'It is far better that we meet at the summit than at the brink,' for 'domestic policy can only defeat us; foreign policy can kill us.'

The book is chiefly valuable for an acute analysis of Kennedy's character, when Mr. Schlesinger forgets his idolatry for sympathy. Indeed, Mr. Schlesinger is clever enough not to omit Kennedy's early silence on the subject of Senator McCarthy; he knows that even the official painters of Cromwell had to put in the wart on his nose. The courage and wit of the late President spring out on every page, and the courage and wit which he passed on to those who supported him. He had aristocratic qualities of 'grace under pressure'; he questioned all political shibboleths (What is prestige? Is it the shadow of power or the substance of power?'); he used all the means at the disposal of the President 'that•are specified and some that are not'; he was America's first President who was 'ineradicably urban'; and he had a rare percep- tion of the chaos and death that lie beneath the frail veneer of civilisation and order, as when he quoted Blanche of Castile's speech to a startled group of visitors, beginning, 'The sun's o'ercast with blood; fair day, adieu!'

The murder of John F. Kennedy was tragic for every human being because it was the wanton killing of potential greatness. As Mr. Schlesinger rightly puts it, he had only had the two years of preparation necessary to become a great President. 'He had had so little time: it was as if Jackson died before the nullification con- troversy and the Bank war, as if Lincoln had been killed six months after Gettysburg or Franklin Roosevelt at the end of 1935 or Truman before the Marshall Plan.' Kennedy had not the time to succeed; Lyndon Johnson built what he had preached. But he had set a style, an aristo- cratic style of excellence, that had never been seen in American politics.

Kennedy's first two biographers, his speech- writer Sorensen and his political historian Schlesinger, have each set down a lengthy version of that complex, cool, disciplined, laconic, for- midable man. Yet the halo still drops its cloaking light over the body of 'the martyred President. The wounds of his death are still too raw and near for his whole body and soul to be de- scribed with the dispassionate wit that he would have turned on his own doings. He was not quite the Greek and existential hero that his staff writers make him. He was the President he wanted to be, no more and no less. He sought the White House, as he told his father, because 'these things have always been done by men, and they can be done by men now.' As a man, Ptesident Kennedy still waits for his historian.