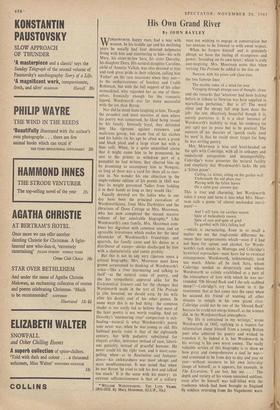 His Own Grand River

WORDSWORTH, happy man, had a way with women. In his middle age and his declining years he usually had four devoted helpmates living with him and ministering to him-his wife Mary, his sister-in-law Sara, his sister Dorothy, his daughter Dora. His natural daughter Caroline, child of Annette Vallon, was also devoted to him and took great pride in their relation, calling him 'Father' on the rare occasions when they met— to the embarrassment of Southey and Crabb Robinson, but with the full support of his other womenkind, who regarded her as one of them- selves. Ironically enough for *the romantic legend, Wordsworth was • far more successful with the sex than Byron.

Nor did he mind them laughing at him. Though the proudest and most sensitive of men where his poetry was concerned, he liked being teased by his family. Intensely loyal, they defended him like tigresses against reviewers and malicious gossip, but made fun of his clothes and his habits (in his age he often wore a green and black plaid and a large straw hat with a blue veil). When, in a quite unjustified alarm that it might cause him to be prosecuted, he sent to the printer to withdraw part of a pamphlet he had written, they cheered him up by promising to accompany him to Newgate, so long A there was a yard for them all to exer- cise in. No wonder his one objection to the single-volume edition of his poems in 1845 was that its weight prevented 'ladies from holding it in their hands as long as they would like.'

Equally devoted are the ladies who in our day have been the principal custodians of Wordsworthiana, from Miss Darbishire and the librarians of Dove Cottage to Mrs. Moorman, • who has now completed the second massive volume of her admirable biography.* Like Wordsworth's own family, Mrs. Moorman com- bines her de,yotion with common sense and an agreeable irreverence which makes her the ideal chronicler of Wordsworth's friendships and quarrels, his family cares and his duties as a distributor of stamps—duties discharged by him with a characteristic and canny probity.

But this is not in any very rigorous sense a critical biography. Mrs. Moorman must have grown accustomed to thinking of Wordsworth's voice—'like a river murmuring and talking to itself'—as the natural voice of poetry, and she has sympathetic approval alike for the Ecclesiastical Sonnets and for the changes that Wordsworth made in the text of The Prelude (a title invented, we should note, by his wife after his death) and of his other . poems. In some ways this is no bad thing: the common reader is too easily led to believe that most of the later poetry is not worth reading. And yet Dorothy's 'murmuring river' comparison is mis- leading—natural is what Wordsworth's poetic tone never was, when he was young or old. His habitual poetic voice is that of the eighteenth century, but with pedantry substituted for elegant artifice, insistence instead of ease, labori- ous geniality instead of graceful humour. He never could hit the right tone, and is most com- pelling when—as in Resolution and Indepen- dence—his awkwardness was most abrupt and most unselfconscious. It was noted that when he met Byron 'he tried to talk his best and talked too much.' It is the same with his pOetry: its extreme selfconsciousness is that of a solitary

When he forgets himself and is genuinely abrupt we have the feeling of strangeness and power, 'brooding on its own heart,' which is truly awe-inspiring. Mrs. Moorman notes that when revising The Prelude he added to the line on Newton, with his prism and silent face.

The marble index of a mind for ever Voyaging through strange seas of thought, alone. and she remarks that 'whatever had been lacking before in tribute to Newton was here supplied in marvellous perfection.' But is it? The word silent and the abrupt full stop have done the job: the rest, effectively beautiful though it is, merely poeticises it. It is a clear instance of Wordsworth's inability to stop, his tendency (at any age) not to prose but to be poetical. The nemesis of his theories of 'speech really used by men' is that he could never forget for long he was writing poetry.

Mrs. Moorman is wise and level-headed on the split with Coleridge, with all its unhappy and undeclared antagonism and incompatibility. Coleridge's voice possesses the natural facility and simplicity that Wordsworth's lacks. He jots a 'kitten poem':

Catling, i.e. kitten, sitting on the garden wall Underneath the old plum tree Playing-with the fallen leaves On a calm gray autumn day.

This is true and charming, but Wordsworth takes it away and turns it into what Mrs. Moor- man calls a poem 'of almost unclouded merri- menr—

And I will have my careless season Spite of melancholy reason.

—which is excruciating. Even in so small a matter we see the tragi-comic difference be- tween their temperaments which—even if it had not been for opium and alcohol, for Words- worth's rash words to Montagu and Coleridge's hysterical reproaches—must have led to eventual estrangement. Wordsworth, unknowingly, took too much.. Above all he took Sara, whom Coleridge needed so desperately and whom Wordsworth so calmly established as a part of the atmosphere of love with which he was sur- rounded. 'Oh blessed flock and I the sole scabbed sheep!'—Coleridge's cry has latent in it the resentment that at last came into the open when he accused his friend of wanting all other streams to mingle in his own grand river. Coleridge could not be one of the 'blessed flock' because he could not merge himself, as the women did, in the Wordsworthian atmosphere.

'My life is contained in my writings, wrote Wordsworth in 1842, replying to a request for information about himself from a young Breton poet who admired his poetry and wished to translate it. So indeed it is, but Wordsworth in his writing is his own worst enemy. The really valuable service of this biography is to show us how great and comprehensive a soul he was— and continued to be from day to day and year to year—without recourse to his own latter-day image of himself, as it appears, for example, in The Excursion. 'I am lost, but see. . . .' The depth and variety of his vision remained sublime, even after he himself was half-blind with the trachoma which had been brought to England liy soldiers returning from the Napoleonic wars.