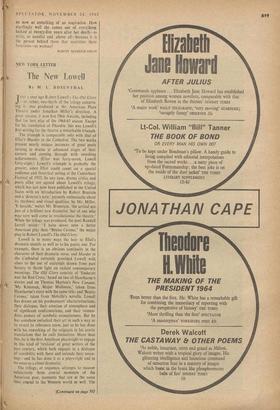 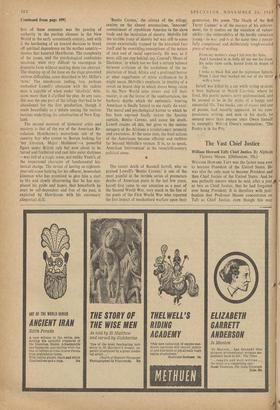 By NI. L. ROSENTHAL Jusi a year ago Robert Lowell's The Old Glory --or rather, two-thirds of the trilogy compris- ing it— was produced at the American Place Theatre under Jonathan Miller's direction. A great success, it won five Obie Awards, including that for best play of the 1964-65 season. Except for his translation of Phaedra. this was Lowell's first writing for the theatre, a remarkable triumph.

The triumph is comparable only with that of Eliot's Murder in the Cathedral. The two works present nearly unique instances of great poets turning to drama at advanced stages of their careers and coming through with smashing achievements. (Eliot was forty-seven, Lowell forty-eight.) Lowell's triumph is probably the greater, since Eliot could count on a special audience and theatrical setting at the Canterbury Festival of 1935. In any case, drama critics and poets alike are agreed about Lowell's trilogy. which has just now been published in the United States with an introduction by Robert Brustein and a 'director's note.' joyously enthusiastic about its rhythmic and visual qualities, by Mr. Miller. 'It heralds,' writes Mr. Brunstein. 'the arrival not just of a brilliant new dramatist, but of one who may very well come to revolutionise the theatre.' When the trilogy was produced. the poet Randall Jarrell wrote: '1 have never seen a better American play than "Benito Cereno," the major play in Robert Lowell's The Old Glory.'

Lowell is in many ways the heir to Eliot's dramatic mantle as well as to his poetic one. For example, there is an obvious continuity in the character of their dramatic verse, and Murder in the Cathedral certainly provided Lowell with clues to the use of materials drawn from past history to throw light on violent contemporary meanings. The Old Glory consists of 'Endecott and the Red Cross,' based on two of Hawthorne's stories and on Thomas Morton's New Canaan; 'My Kinsman, Major Molineux,' taken from Hawthorne's story with the same title; and 'Benito Cereno,' taken from Melville's novella. Lowell has drawn on his predecessors' characterisations, their dialogue, their creation of atmosphere and of significant confrontations, and their tremen- dtius powers of symbolic evocativeness. But he has somehow unlocked their art in such a way as to reveal its relevance anew, just as he has done with his reworking of the originals in his poetic translations that he calls Imitations. More than this, he is the first Amefican playwright to engage in this kind of 'revision' of great writers of the past century, which both engages in a dialogue of sensibility with them and extends their mean- ings —and he has done it as a playwright and in no sense as a closet dramatist.

The trilogy,. or sequence, attempts to recover subjectively three crucial moments of the American past, moments that are at the same time crucial to the Western world as well. The

first of these moments was the passing of authority to the puritan element in the New World in the early seventeenth century, and with it the hardening of an inward decision to break off spiritual dependence on the mother country— themes that haunted Hawthorne. The complexity of the issues, and the psychological confusions involved, were very difficult to encompass in dramatic form without making them too abstract. The shaping-up of the issue on the stage presented various difficulties, some described in Mr, Miller's `note.' The murderous ending, too, perhaps embodied Lowell's obsession with the sadism man is capable of when under 'idealistic' delu- sions more than it clarified the play. In any case, this was the one part of the trilogy that had to be abandoned for the first production, though it reads beautifully as a debate among the various - motives underlying the colonisation of New Eng- land.

The second moment of historical crisis and mystery is that of the eve of the American Re- volution. Hawthorne's marvellous tale of the country boy who conies to Boston looking for 'my kinsman, Major Molineux'—a powerful figure under British rule but now about to be tarred and feathered and cast into outer darkness —was full of a tragic sense, not unlike Yeats's, of the impersonal character of fundamental his- torical change. The device of having an eighteen- year-old come looking for his affluent, benevolent kinsman who has promised to give him a start in life and slowly discovering that he has mis- placed his pride and hopes, that henceforth he must be self-dependent and free of the past, is exploited by Hawthorne with his customary allegorical skill. `Benito Cereno,' the climax of the trilogy, centres on the almost unconscious, 'innocent' commitment of republican America to the slave trade and the institution of slavery. Melville felt the terrible irony of slavery but was still to some extent existentially trapped by the historical fact itself and by overriding conceptions of the nature of race and of racial superiority. He was, as it were, still one step behind, say, Conrad's `Heart of Darkness,' in which too we find a certain balance between criticism of the sordidness of the ex- ploitation of black Africa and a profound horror at what engulfment of white civilisation by it might mean. Melville's emphasis in treating of a revolt on board ship in which slaves being taken to the New World seize power and kill their master, is on the terror of the confrontation, the barbaric depths which the optimistic, trusting American is finally forced to see really do exist. The moral and 'psychological horror to which he has been exposed finally sicken the Spanish captain, Benito Cereno, and cause his death. Lowell retains all this, but gives to the sinister savagery of the Africans a revolutionary intensity and awareness. At the same time, the final actions of the Americans become efficient and ruthless far beyond Melville's version. It is, so to speak, American `intervention' in the twentieth-century political sense.

The recent death of Randall Jarrell, who so praised Lowell's `Benito Cereno,' is one of the most painful in the terrible series of premature deaths of American poets in the last few years. Jarrell first came to our attention as a poet of the Second World War, very much in the line of the poets of the First World War who reported the first impact of mechanised warfare upon their

generation, His poem 'The Death of the Ball Turret Gunner' is of the essence of his achieve- ment, for it centres on the violation of vulner- ability-=the vulnerability of the hardly conscious young ----in war. and is at the same time a power- fully compressed and deliberately tough-minded piece of writing:

From my mother's sleep I fell into the State. And 1 hunched in its belly till my wet fur froze. Six miles from earth, loosed from its dream of life, I woke to black flak and the nightmare fighters. When I died they washed me out of the turrt with a hoSe.

Jarrell was killed by a car while trying to cross a busy highway in North Carolina. where he lived. His poetic power~ were undiminished, and he seemed to be in the midst of a happy and successful life. Two hooks, one of essays and one of poems, had recently appeared. In his com- passionate writing. and now in his death, he seemed more than anyone since Owen himself to exemplify WW1 id Owen's summation: `The Poetry is in the Pil