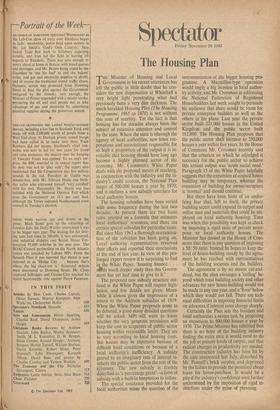 Page 3, 26 November 1965 — Portrait of the Week— AN ODOUR OF SANCTIONS oppressed Westminster
Close

Portrait of the Week— AN ODOUR OF SANCTIONS oppressed Westminster

as the Lab-Con show of unity over Rhodesia began to fade : meanwhile, police fired upon strikers in Mr. Ian Smith's 'God's Own Country', Miss Judith Todd flew back to Salisbury expecting trouble, and Iran led the field in barring oil exports to Rhodesia. There was also enough to worry about at home in Britain, with bread queues and shortages, and Mr. Brown being urged by the Guardian to 'use his loaf' to end the bakers' strike, and gas and electricity supplies in doubt, and of course the traditional winter traffic chaos. Dynamic action was promised from Downing Street to beat the plot against the Government instigated by the climate: sure enough, the Minister of Power responded with a master-stroke, pressuring the oil and coal people not to take advantage of gas and electricity by advertising plentiful supplies during the power-cut season.

THIEVES OUTWITTED THE LATEST burglar-resistant devices, including a hot line to Scotland Yard, and made off with £300,000 worth of jewels from a West End shop. At Durham prison, armed troops had been called in to make sure three Train Robbers did not escape. Southend's chief con- stable was sent to jail- for two years 'for fraud and false pretences; the inquiry into the hanging of Timothy Evans was opened. To no one's sur- prise, the BBC asserted in its annual report that its duty was not to, 'play safe': the report also mentioned that the Corporation was five million Pounds in the red. President de Gaulle was seventy-five, with Mr. Edward Heath one birth- day caller who expressed himself 'very satisfied' with his visit. Presumably Mr. Heath was less satisfied with the National Opinion Poll which gave the Government an 18.5 per cent lead, although the Tories captured Northampton town council in Tuesday's election.

'MERE WERE various ups and downs in the press: Mark Boxer gave up the editorship of London Life, the Daily Worker announced it was to be bigger next year. The waiting list for driv- ing tests had risen to 500,000, it was announced, and industrial disputes cost British Motor Cor- poration 95,000 vehicles in the past year. The BOAC-Cunard partnership on the North Atlantic routes was attacked by Labour MPs. From the Seventh Fleet it was reported that Hanoi is now referred to as 'Dodge City . . . because that's where the big shoot-out is.' Structural defects were discovered at Downing Street. Mr. Clore captured Selfridges, and Cassius Clay retained his world heavyweight title against Floyd Patterson.