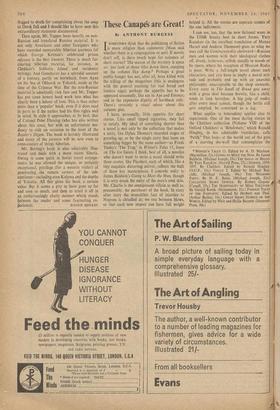 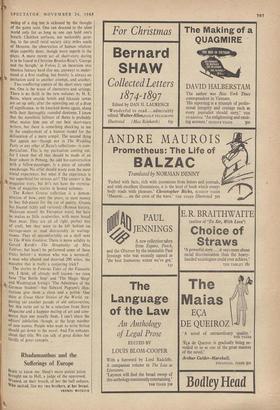 These Canapes are Great!

T SOMETIMES think that the publishing of fiction _Lis more religion than commerce (Mass said whether there is a congregation or not). If novels don't sell, is there much hope for volumes of short stories? The season of the mystery is upon us: just look at those titles down there, creeping up the column like damp.* Perhaps a great public hunger has not, after all, been killed with the killing of the magazines (this is analogous with the general yearning for real bread and lionless eggs); perhaps the appetite has to be appeased seasonally, like sex in Ape and Essence, and in the expensive dignity of hardback only. There's certainly a ritual odour about this autumn glut.

I have, personally, little appetite for short stories. Like small tipped cigarettes, they fail to satisfy. My ideal of something shorter than a novel is met only by the collection that makes a unity, like Dylan Thomas's recorded stages of growing up, or by the single story that leans on something bigger by the same author—as Frank Tuohy's 'The Trap,' in Winter's Tales 11, leans on The Ice Saints. I think, best of all, a novelist who doesn't want to write a novel should write three contes, like Flaubert, each of which, like a tiny exquisite distorting mirror, reflects the bulk of three key masterpieces. I concede unity to James Baldwin's Going to Meet the Man, though it is very much the unity of the man's own skin. Mr. Charlie is the omnipresent villain as well as, presumably, the purchaser of the book. In story after story the monolithic fact of injustice to Negroes is chiselled at; we rest between blows, so that each new impact can have full weight

behind it. All the stories are separate counts of the one indictment.

I can see, too, that the new fictional wave in the USSR breaks best in short forms. Yury Kazakov (in the excellent translation of Manya Harari and Andrew Thomson) gives us what we may call the Gemingwayskiy chelovyek—Russian men and women with their ideological clothes off, drunk, lecherous, selfish, usually in woods or by rivers, where the reception of Moscow Radio is poor. Write a full-length novel about such characters, and you have to imply a moral atti- tude and probably end up with an anarchic philosophy unacceptable to the shop stewards. Every story in The Smell of Bread gets away with a great deal because brevity, like a child, tends to look harmless. A big gulp of vodka after every meal cannot, though the bottle still gets emptied, be construed as a jag.

What applies to heterodoxy applies also to experiment. One of the most daring stories in the Chekhov collection (Volume VIII of the Oxford Chekhov) is `Belolobuiy,' which Ronald Hingley, in his admirable translation, calls `Patch.' This looks at the world out of the guts of a starving she-wolf that contemplates the * WINTER'S TALES 11. Edited by A. D. Maclean. (Macmillan, 21s.) GOING TO MEET THE MAN. By James Baldwin. (Michael Joseph, 25s.) THE SMELL OF BREAD. By Yury Kazakov. (Harvill Press, 25s.) STORIES. 1895- 1897. By Chekhov. Edited by Ronald Hingley. (O.U.P., 35s.) Voicus 2. Edited by Michael Rat- chile. (Michael Joseph, 30s.) THE WEDDING PARTY. By H. E. Bates. (Michael Joseph, 21s.) COLLECTED SHORT STORIES. By Robert Graves. (Cassell, 25s.) THE HOSPITALITY OF MISS TOLLIVER. By Gerald Kersh. (Heinemann, 21s.) FAMOUS TALES OF THE FANTASTIC. Edited by Herbert van Thal. (Arthur Barker, 18s.) GREAT SHORT STORIES OF Tl IF WORLD. Edited by Whit and Hallie Burnett. (Souvcili Press, 30s.) eating of a dog but is sickened by the thought of the gamy taste. One can descend to the alien world only for as long as one can hold one's breath. Chekhov surfaces, not noticeably gasp- ing, to the small rural society sixty miles south of Moscow, the observation of human relation- ships superbly done, though more superb in the plays. A more recent act of short-story daring is to be found in Christine Brooke-Rose's 'George and the Seraph,' in Voices 2, an incursion into timeless fantasy hard (for me, anyway) to under= stand at a first reading, but brevity is always an 5'1 invitation card to another attempt, and another.

Two conflicting aspects of the short story repel me. One is the waste of characters and settings. There is no thrift in the new volumes by H. E. Bates, where seaside hotels and lakeside towns are set up only, after the squeezing out of a drop of significance, to be knocked down again, along with their thoroughly rounded denizens. I know that the novelistic fullness of Bates is probably what makes him one of our best short-story Writers, but there is something shocking to me in the employment of a human model for the delineation of a mere armpit. The second thing that appals me—though not in The Wedding Party or any other of.Bates's collections—is com- mercialism. This is my puritanism coming out, for I know that all that should be made of an hour ashore in Penang, the odd bar-conversation with a fellow-passenger, is a piece of saleable anecdotage. No artist should waste even the most trivial experience; but what if the experience is too superficial for serious art? The answer is the magazine story, but let's not have the eternisa- tion of magazine stories in bound volumes.

The Robert Graves collection is a demon- stration of how, over the years, to earn money to buy fish-pieces for the cat of poetry. Graves has feasted richly and variously (Roman history, Majorcan mores; the European wars), but here he makes us little sandwiches, with more bread than meat. They are all all right, perfect bits of craft, but they were to be left behind on carriage-seats or read distractedly in waiting- rooms. They sit uncomfortably on a shelf next to The White Goddess. There is more solidity to Gerald Kersh's The Hospitality of Miss Tolliver, but hasn't he performed some of these tricks before—a woman who was a werewolf, a man who abused and deserted 200 wives, the macabre that is really a conjuring trick?

The stories in Famous Tales of the Fantastic are, I think, all already well known—we even have "The Bottle Imp' and The Magic Shop' and Washington Irving's 'The Adventure of the German Student'—but Edward Pagram's illus- trations give them a clean and a polish. One shies at Great Short Stories of the World, ex- pecting yet another parade of old unfavourites, but this turns out to be a selection from Story Magazine and a happier mating of art and com- merce than one usually finds. I can't share the editors' jubilation, though, at the large number of new names. People who want to write fiction should get down to the novel. And I'm unhappy about that title. We can talk of great dishes but hardly of great canapds.