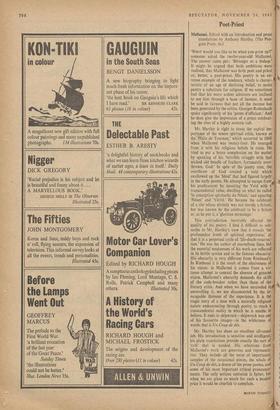 `WHAT would you like to be when you grow up?' someone asked the twelve-year-old Mallarme. The answer came pat: `Beranger or a bishop.' It might be argued that both ambitions were realised, that Mallarmd was both poet and priest or, better, a poet-priest. His poetry is an ex- treme example of the tendency, which, is charac- teristic of an age of declining belief, to make poetry a substitute for religion. If we sometimes feel that his more ardent admirers are inclined to see him through a haze of incense, it must be said in fairness that not all the incense has been generated by the critics. Georges Rodenbach spoke significantly of his `gestes d'officiant.' And he does give the impression of a priest celebrat- ing the rites of a highly esoteric cult.

Mr. Hartley is right to stress the capital im- portance of the severe spiritual crisis, known as the `Nuits de Tournon,' which occurred in 1866 when Mallarme was twenty-four. He emerged from it with his religious beliefs in ruins. He tried to put a brave complexion on the matter by speaking of his 'terrrible struggle with that wicked old bundle of feathers, fortunately over- thrown, God.' In spite of the jaunty tone, the overthrow of God created a void which swallowed up the 'Ideal' that had figured largely in the early poems. He attempted to escape fromo his predicament by investing the Void with a transcendental value, dwelling on what he called `la conception spirituelle du Neant,' and equating 'Mane and `V6ritd.' He became the celebrant of a rite whose divinity was not merely a fiction, but was known by the celebrant to be a fiction or, as he put it, a `glorieux mensonge.'

This contradiction inevitably affected the quality of his poetry. I find it difficult to sub- scribe to Mr. Hartley's view that it reveals 'the profoundest levels of spiritual experience,' or that it is a perpetual cycle. of 'life-death-resurrec- tion.' He was the author of marvellous lines, but the essential weaknesses of his work are reflected in its brittle syntax and in the famous obscurity. His obscurity is very different from Rimbaud's. In Rimbaud it is the result of the elusiveness of his vision; in Mallarme it comes from a vir- tuoso attempt to conceal the absence of genuine vision. Mallarmes obscurity demands the skills of the code-breaker rather than those of the literary critic. And when we have succeeded WI unravelling it, we are disconcerted by the in- escapable thinness of the experience. It is the tragic story of a man with a naturally religious nature endeavouring through poetry to reach a transcendental reality in which he is unable to believe. It ends in shipwreck—shipwreck was one of his favourite images—in the wilderness of words that is Un Coup de des.

Mr. Hartley has done an excellent all-round job. His introduction is sensitive and intelligent; his plain translations provide exactly the sort of `crib' that is needed. His selections from Mallarmd's work are generous and representa- tive. They include all the verse of importance, samples of the occasional pieces, the whole of Un Coup de des, a dozen of the prose poems, and some of his most important critical pronounce- ments. The only serious omission is 1gitur, but when we are given so much for such a modest price it would be churlish to complain.