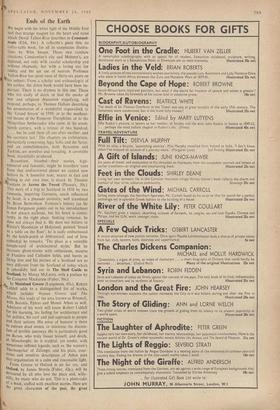 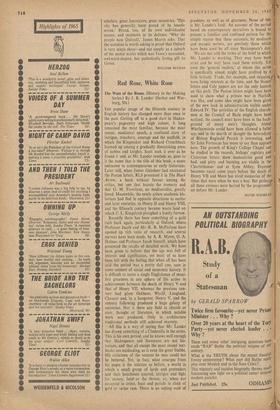 WE begin with the white light of the Middle East and that strange magnet for the heart and mind which David Talbot-Rice describes in Constanti- nople (Elek, 84s.). A collector's piece this, no coffee-table book, for all its sumptuous illustra- tions by Wim Swaan. Those two rainbow creations, Constantine's city and Mehmet's, are depicted, not only with careful scholarship and without rhapsody, but with a loving eye for oddity and the apt use of Sources. Professor Talbot-Rice has spent most of thirty-six years on I his subject. From a scholar and archaeologist of his calibre, the driest book would have been im- portant. There is no dryness in this one. Those who tire easily of dates, or find the smoke of war and religious discussion stupefying, will respond, perhaps, to Thomas Dallam describing his presentation of a wonderful organ-clock to the 'Grand Sinyor' in 1599; or to the mechani- cal throne of the Emperor Theophilus; .or to the Mingrelian Ambassador who came, in the seven- teenth century, with a retinue of two hundred,

. but he sold them all one after another, and his secretary last.' The chapters on architecture, Particularly concerning Agia Sofia and the Saray, and on embellishments, both Byzantine and Turkish, are sensitive and revealing. A covetable book, beautifully produced.

Byzantium, Istanbul—their stories, high- coloured and fantastic, might be travellers' tales from that undiscovered planet we cannot now believe in. A homelier note, nearer in fact and „feeling to our own time, is struck by Theodor 71 ontane in Across the Tweed (Phoenix, 30s.). This story of a trip to Scotland in 1858 by two romantic, inquiring Germans, much influenced by Scott, is a pleasant curiosity, well translated by Brian Battershaw. Fontane's history (as Sir James Fergusson points out in his introduction) Is not always accurate, but his heart is consis- tently in the right place. Seeking romance, he does not always find it. He does not believe in Rizzio's bloodstain at Holyrood, painted 'broad as a table on the floor'; he is sadly embarrassed by the hotch-potch at Abbotsford; and of lona cathedral he remarks, 'The place is a veritable sample-card of architectural styles.' But he recounts ghost-stories with enthusiasm, mourns at Flodden and Culloden fields, and leaves us liking him and hii picture of a Scotland not so very different from the Scotland of today which Is splendidly laid out in The Shell Guide to Scotland, by Moray McLaren, with a preface by Sir Compton Mackenzie (Faber, 50s.).

In Mainland Greece (Longmans, 45s.), Robert Liddell adds to a distinguished list of works, Which includes Aegean Greece and The Morey. this study of the area known as Rdumeli, With Boeotia, Epirus and Mount Athos as well. Admirers of his work will know Robert Liddell for his learning, his feeling for architecture and for politics, his cool and just approach to people and their actions. His sense of humour is there to enliven dead stones, or minimise the discom- fort of terrible journeys. He is particularly good en Byron, who truly found himself, and death, at Missolonghi; he is truthful, yet tender, with sometimes inflated legends, such as 'the women's Thermopylae' of Mingo; and his plain, cour- teous and sensitive description of Athos puts that organisation in a calm and reasonable light.

From Greece to Oxford is no far cry, and Oxford, by James Morris (Faber, 42s.), will be devoured by all who love the place and,

willy- hi11Y, by many who do not. This is a plum-cake of a book, stuffed with excellent stories. Here are the great characters of the past, the great

scholars, great innovators, great eccentrics. 'This city has generally been proud of its lunatic streak.' Proud, too, of its own individualist nature, and stubborn in its defence. 'Why do people hate Oxford?,' James Morris asks. That the question is worth asking is proof that Oxford is very much there—and not simply as a suburb of the motor works which was Town's unwanted, awkward-shaped, but pathetically loving gift to Gown.