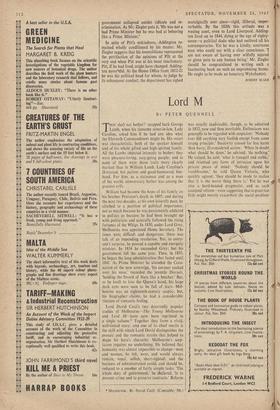 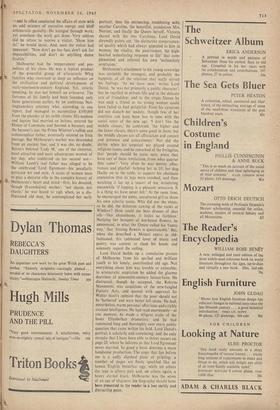 BY PETER QUENNELL Tr HOU shalt not bother!' snapped back George I Lamb, when his tiresome sister-in-law, Lady Caroline, asked him if he had any idea what the Eleventh Commandment might be. His retort was characteristic, both of the speaker himself and of his whole gifted and high-spirited family. All the Lambs objected intensely to bother; they were pleasure-loving, easy-going people; and in none of them were those traits more clearly marked than in William. Lamb, Lady Caroline's ill-treated, but patient and good-humoured, hus- band. For him, as a statesman and as a man of the world, unnecessary bother was among the greatest evils.

William had become the hope of his family on his brother Peniston's death in 1805; and during the next two decades, at his own leisurely pace, he climbed to a position of political importance, not so much because he was passionately addicted to politics as because he had been brought up with politicians and naturally followed the rising fortunes of the Whigs. In 1830, under Lord Grey, Melbourne was appointed Home Secretary. The times were difficult and dangerous; there was talk of an impending revolution. Yet, to every- one's surprise, he proved a capable and energetic minister. In 1834 he succeeded Grey; but his government fell the same year. Then, in 1835, he began the long administration that lasted until 1841. As Prime Minister he attended the Coro- nation of the new sovereign, 'his coronet cocked over, his nose,' recorded the juvenile Disraeli, 'holding the Sword of State like a butcher.' But, as he knelt to kiss the Queen's hand, his large dark eyes were seen to be full of tears. Mel- bourne was an eighteenth-century sceptic; but, his biographer claims, he had a considerable tincture of romantic feeling.

Lord David Cecil's two deservedly popular studies of Melbourne—The Young Melbourne and Lord M—have now been reprinted in a single volume.* Together they form a vivid, well-linked story; and one of its chief merits is the skill with which Lord David distinguishes the prosaic and the romantic strains that helped to shape his hero's character. Melboprne's seep- ticism requires no underlining. He believed that humanity was almost impossible to change—men and women, he felt, were, and would always remain, venal, selfish, short-sighted; and the business of administration could, and should be, reduced to a number of fairly simple tasks. 'The whole duty of government,' he declared, 'is to prevent crime and to preserve contracts.' Reform

was usually inadvisable, though, as he admitted in 1832, now and then inevitable. Enthusiasm was generally to be regarded with suspicion: 'Nobody ever did anything very foolish except from some strong principle.' Inactivity caused far less harm than hasty, ill-considered action: 'When in doubt what should be done,' he advised, 'do nothing.' He valued, he said, 'what is tranquil and stable,' and resented any farm of intrusion upon his private peace of mind: 'Nobody should be troublesome,' he told Queen Victoria, who quickly, agreed; 'they should be made to realise that it is the worst thing there is.' Yet he was also a hard-headed pragmatist, and as such accepted reform—even suggesting that to grant too little might merely exacerbate the social problem

—and in office conducted the affairs of state with an odd mixture of executive energy and bluff aristocratic geniality. He lounged through work; yet ,somehow the work got done. Very seldom did he refuse to receive a visitor. 'Show him inI ' he would shout. And, once the visitor had appeared: 'Now don't go too fast, don't ask for impossibilities, and don't do anything damn foolish.'

Melbourne had the temperament and pre- judices of his class. He was a typical product of the powerful group of aristocratic Whig families who exercised so deep an influence on the civilisation and political development of early-nineteenth-century England. Yet, strictly speaking, he was not himself an aristocrat. The fortunes of his family had been founded, only three generations earlier, by an ambitious Not- tinghamshire attorney who, according to one report, had managed to accumulate £100,000 from the plunder of his noble clients. His nephew and legatee had married an heiress, entered the House of Commons and become a baronet; and the baronet's son, the Prime Minister's raffish and commonplace father, eventually secured an Irish peerage. But Melbourne's mother was descended from an ancient line; and it was she, no doubt, Byron's beloved 'Lady M,' one of the cleverest, most attractive and most adventurous women of her day, who conferred on her second son— William Lamb's real father was alleged to be the celebrated ' Lord Egremont—his peculiarly patrician wit and style. A series of women were to play a decisive role in the complex history of Melbourne's heart and mind—first, his devoted, though ill-conducted, mother: 'not chaste, not chaste,' he was heard to sigh when, as a dis- illusioned old man, he contemplated her early portrait; then his entrancing, maddening wife, another Caroline, the beautiful, scandalous Mrs. Norton; and finally the Queen herself. Victoria shared with the two Carolines, Lord David shrewdly points out, 'the distinctive temperamen- tal quality which had always appealed to him in women; the vitality, the positiveness, the high- hearted unhesitating response to life' that com- plemented and relieved his own 'melancholy scepticism.'

Melbourne's attachment to his young sovereign was certainly the strangest, and probably the happiest, of all the relations that really stirred his feelings. 'As we have seen,' writes Lord David, 'he was not primarily a public character'; but he excelled in private life and in the delicate arts of friendship: and to the virgin Queen he was such a friend as no young woman could have failed to find delightful. Even his cynicism did not disturb her unduly, though few of her courtiers can have been less in tune with the social tenor of the new age. 'I don't like the middle classes,' he confessed; 'the higher and the lower classes, there's some good in them; but the middle classes are all affectation and conceit and pretence and concealment.' Nor did she shrink when his sceptical wit played around religious issues, and he remarked of the Irvingites, that 'people should be quite sure, when they have any of these revelations, from Wiat quarter they come!' Very often he was merely affec- tionate and playful—helping her to lift her dog Dashy on to the table, to support his obstinate contention that its legs were crooked, and then watching it lap up a saucer of tea, wondering meanwhile `if lapping is a pleasant sensation. It is a thing we have never felt.' At the same time, he encouraged the naive, uncultured girl to share his •own eclectic tastes. Why did not she enjoy, as he did, the dolorous cawing of the rooks at Windsor? How could she bear dresses of shot silk—'like chameleons, it looks so faithless.' Noticing her bouquet of hot-house flowers, he announced, in what the Queen called his 'funny way,' that 'forcing flowers is questionable.' But, when 'she described a Mozart opera as old- fashioned, this cultivated lover of music and poetry was content to clasp his hands and solemnly regard the ceiling.

Lord David builds up a cumulative picture of Melbourne from his spoiled and brilliant youth to his lonely, overclouded old age. Not everything about him was lovable or estimable; to aristocratic scepticism he added the gloomy doctrines of nineteenth-century laissez-faire. He distrusted, though he accepted, the Reform Movement, was suspicious of the new-fangled Factory Acts, and quoted with approval Sir Walter Scott's opinion that the poor should not be 'bothered' and were better left alone. He had, nevertheless, warm personal affections and a richly stocked intelligence. He had read enormously—at one moment, he made a diligent study of the lesser Elizabethan dramatists; and he had ruminated long and thoroughly over every public question that came within his field. Lord David's portrait is scholarly and convincing; and the only mistake that I have been able to detect occurs on page 23, where he informs us that Lord Egremont never married. So good a book deserves a more handsome production. The copy that lies before me is a sadly slipshod piece of printing; a number of pages are finely speckled like an honest English breakfast egg; while on others the type is silvery pale and, on others again, a heavy clotted black. Melbourne was the scion of an age of elegance; his biography should have been presented to the reader in a less untidy and distracting guise