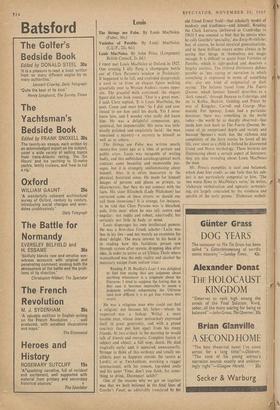 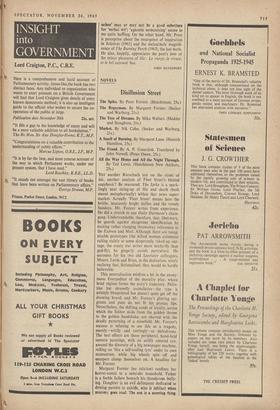 I FIRST met Louis MacNeice at Oxford in 1927. One evening I idly flung a champagne bottle out of Clere Parsons's window in Peckwater. It happened to be full, and exploded dangerously a yard or so from an elegant figure walking gracefully over to Wystan Auden's rooms oppo- site. The graceful walk continued; the elegant figure did not look round. 'That is a great man,' I said. Clere replied, 'It is Louis MacNeice, the poet. Come and meet him.' So I did, and con- tinued to see him until his death. Yet I never knew him, and I wonder who really did know him. He was a delightful companion, gay, quizzical, but impenetrable. His verse was tech- nically polished and exquisitely lucid: the man remained a mystery—a mystery to himself as well as to others.

The Strings are False was written nearly twenty-five years ago at a time. of private and public crisis. Louis was incapable of writing badly, and this unfinished autobiographical work contains some beautiful and memorable pas- sages, but it is strangely unilluminating about himself. Also, it is often inaccurate in the physical, historical sense. He made for himself images of persons and places so private, so idiosyncratic, that they do not connect with the facts. His sister Elizabeth (Lady Nicholson) has corrected some of these errors; or should one call them inventions? It is strange, for instance, to be told that Clere Parsons was 'a bleached, pale, little man' when he was tall, severe and angular: not ruddy and robust, admittedly, but certainly not little in body or mind.

Louis disparages his own intellectual powers. He was a first-class Greek scholar--Latin was less in his line--and not merely an examinee for dons' delight. The main interest in his book is in reading how this fastidious person saw through system after system, dropping idea after idea, in order to arrive at an Ultima Thule where womanhood was the only reality and alcohol the necessary escape from tedium vitae: Reading F. H. Bradley's Logic I was delighted to find him saying that any judgment about anything whatsoever is a judgment about the Universe; I tried to suppress the feeling that in that case it becomes impossible to assess a judgment without subpoenaing the Universe (and how difficult it is to get that witness into court).

He was a religious man who could not find a religion; not because his father--whom •he respected- -was a bishop. Withal a most lovable man, whose inner melancholy expressed itself irt great generosity, and with a proud courtesy that put him apart from his many friends. At two o'clock in the morning he would talk of kinesis and energeia. Complete fusion of subject and object; a full stop; death. He died tragically early; and, it appeared, unnecessarily. Strange to think of this sardonic and totally un- athletic poet as happiest outside the tavern at Lord's; or at Twickenham, watching a rugger international, with his remote, lop-sided smile and his quiet 'Time, don't you think, for some- thing to drink, Davenport sahib?'

One of the reasons why we got on together was that we both believed in the final lines of Goethe's Faust, so admirably translated by his old friend Ernest Stahl—that scholarly model of modesty and kindliness—and himself. Reading the Clark Lectures (delivered at Cambridge in 1963) I was amused to find that he mocks what he calls Goethe's 'speciality,' das Ewig-Weibliche; but, of course, he hated mystical generalisations, and in these brilliant essays seems always to be saying that things in themselves are magic enough. It is difficult to quote from Varieties of Parable, which is tight-packed and deserves a lengthy analysis. The Oxford Dictionary defines parable as 'any saying or narration in which something is expressed in terms of something else; also any kind of enigmatical or dark saying.' The lectures travel from The Faerie Queene, which. Spenser himself describes as a 'dark conceit,' through Bunyan to Coleridge, and on to Kafka, Beckett, Golding and Pinter by way of Kingsley, Carroll and George Mac- donald. For Spenser, Louis had a particular devotion; there was something in the world today—the world he so sharply observed—that made him turn back to The Faerie Queene, be- cause of its exceptional depth and variety and because Spenser's work has the richness and complexity of the fairy stories he loved all his life, ever since as a child in Ireland he discovered Greek and• Norse mythology. These lectures are illuminating about a certain aspect of literature; they are also revealing about Louis MacNeice the man.

Mr. Press's pamphlet is cool and balanced, which does him credit, as one feels that his sub- ject is not particularly congenial to him. 'The two worst flaws in MacNeice's verse,' he writes, 'elaborate verbalisation and agnostic sermonic ing, are largely concealed by the vividness and sparkle of the early poems.' Elaborate verbali- sation' may or may not be a good substitute for 'verbal wit'; 'agnostic sermonising' seems to me quite baffling. On the other hand, Mr. Press is perceptive about the resurgence of inspiration in Solstices (1961) and the melancholy magnifi- cence of The Burning Perch (1963), the last work. He also, happily, appreciates the poet's love of the minor pleasures of life: Le vierge, le vivace, et le be! aojourd 'hui.