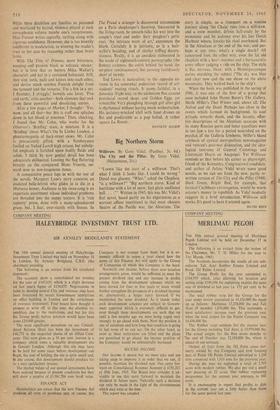 "LOOKS like the start of a williwaw. That's what I think it looks like. I could be wrong." Duval was gloomy. "What," asked the Chaplain, "is a williwaw?" "Big northern storm. Kind of hurricane with a lot of snow. Just plain undiluted hell. . . ." ' Written in 1945, this was Mr. Vidal's first novel, based partly on his experiences as a warrant officer (maritime) in that most obscure theatre of the Pacific war, the Aleutians. The

story is simple, as a transport on a routine journey along 'the Chain! runs into a williwaw, and a crew member, driven half-crazy by the monotony and by jealousy over his lost Dutch. Harbour whore, knocks his rival overboard. But in the Aleutians at the end of the war, and per- haps at any time, what's a single death? All concerned look the other way, even the fat old chaplain with a heart murmur and a bureaucratic army officer cadging a ride on the ship. The style is flat, nervous. bleak, With a Hemingwayesque patina matching the subject ('The sky was blue and clear now and the sun shone on the white mountains. They walked back to the ship').

When the book was published in the spring of 1946, it was one of the first of a group that soon included John Horne Burns's The. Gallery, Merle Miller's That Winter and, above all, The Naked and the Dead. Perhaps too close to the events which formed its background, its cool attitude towards death, and the laconic, effec- tive descriptions of the Aleutians seascape with its stony Russian ports and lunar coastlines were in too low a key for a period nourished on the psychos of the Galleria Umberto, Miller's bland synthesis of cynical metropolitan newsmagazine and veteran's post-war dislocation, and the ideo- logical tantrums of General Cummings and Lieutenant Hearn on Anopopei. Yet Williwaw reminds us that before his career as playwright, friend of the Kennedys, Congressional candidate, and author of Julian, Vidal wrote some good novels, as we can see from the new, partly re- written version of The City and the Pillar (1948). Dark Green, Bright Red, for example, that farcical Caribbean extravaganza, would be worth anyone's money to republish. As Vidal modestly suggests in a brief introduction, Williwaw still works. It's good to have it around again.